Forging a Libyan anti-IS coalition should trump a unity government

Jason Pack
Lauding Libyan progress, and offering to support, not impose, solutions, will reward those flexible actors who banded together 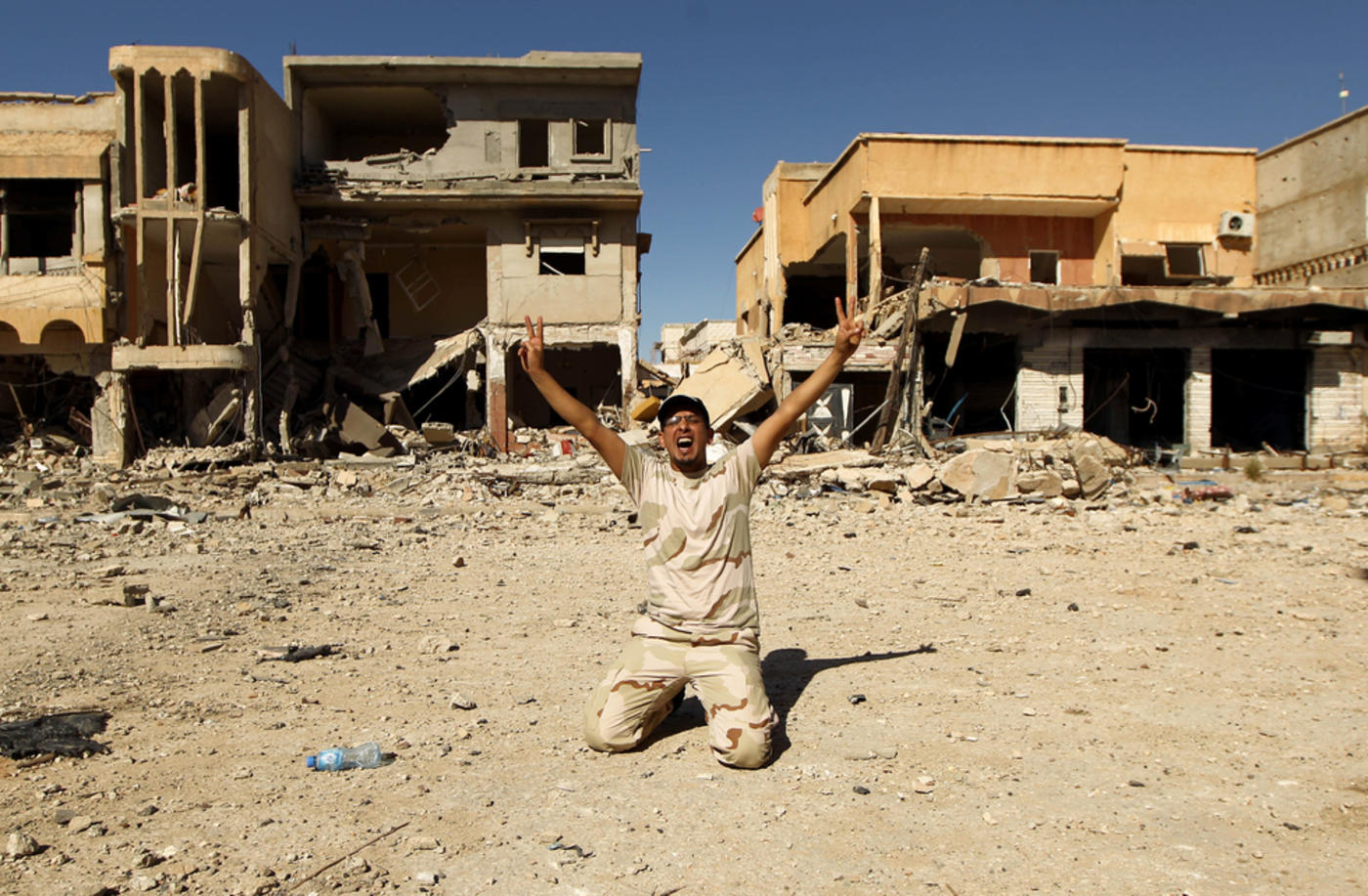 Western policy towards Libya over the last 18 months has remained shockingly rigid – try to unite the two warring parliaments into a national unity government and then have that body work against the Islamic State with Western support. This appeared to be a feasible strategy in early 2015, but as realities have changed on the ground the Western playbook should have evolved.

It didn’t. After the former UN Special Envoy to Libya Bernardino Leon was caught red-handed dealing with the UAE, which led to his supporting their clients, his successor, Martin Kobler, continued with the exact text of the biased agreement that Leon had formulated.

When the first ministerial list for the unity government was rejected by Libya’s House of Representatives (HoR), the international stakeholders ratcheted up the pressure on the HoR to approve a second ministerial list without modifying the flawed procedures that led to the underlying polarisation. Then the second ministerial list seems to have been manufactured by the UN itself, as dissenting members of the Presidential Council claimed.

This narrow-minded rigidity has persisted even over the past few days as tectonic shifts have unfolded in Libya's political landscape. Sadly, rather than responding to these welcome developments with flexibility, the UN-mediated process seems to have outlived its usefulness as its emissaries use social media to attempt to shoehorn Libyans into the flawed unity government against the will of major factions.

Continued Western attempts to force a square peg into a round hole threaten to destroy many of the new aspects of Libyan unity that seem to be emerging. Paradoxically, these attempts are clearly undermining the initial geopolitical purpose of the unity government - to facilitate the conducting of joint actions against the Islamic State (IS) militant group.

Forging an anti-IS coalition should be both Libyans’ and international actors’ primary priority at present; having a signed piece of paper approving a ministerial list and a constitutional amendment legitimating a unity government is only useful as a means to that end if it can heal divisions and return sovereign governmental authority to Libya. IS threatens Libyans’ livelihoods, resource wealth, and future generations’ freedoms.

As the longed-for anti-jihadi coalition seems to be materialising underfoot, the UN and the international media remain focused on the fictitious role of French Special Forces, remaining wilfully oblivious to the gains made by the Libyans themselves. The UN as of 25 February has failed to acknowledge the defeat of IS and Ansar al-Sharia in Benghazi and Ajdabiya by the Libyan National Army (LNA) and the jubilation of returning displaced families to their homes.

Yet placing Western actions centre stage is likely to inhibit the Libyans from taking the initiative. Conversely, lauding Libyan progress, and offering to support, not impose, solutions, will reward those flexible actors who have banded together.

From top-down to bottom-up

It is disturbing to witness UN envoy Martin Kobler and other members of the international community publicly endorse a partisan statement of some HoR members as a valid and legal acceptance of the Government of National Accord (GNA), amid an intensely divided atmosphere in the Tobruk headquarters of the body.

The events surrounding the 23 February vote on the accord were inconclusive and yet the international community is attempting to strong-arm the remaining dissenters to concede. Such heavy-handedness and continued insistence on a top-down approach truly threats to nip in the bud the bottom-up political/military alliance which, in a positive development, might replace the failed top-down politician-focused model.

For all intents and purposes, unity government talks completely collapsed after the prime minister-designate, Fayez Serraj, failed to convince the majority in the HoR to approve his ministerial list and immediately left Tobruk on 23 February for Cairo. Ninety-six HoR members (not enough for a legal quorum) issued a statement denouncing their supposedly being prevented from holding a vote and deeming the accord automatically passed.

It is not the international community’s role to seize upon this extra-parliamentary declaration and proclaim that its "meaning" is that the majority of Libyans want the accord to be passed. Libyans know that the accord hasn’t been approved by the HoR and deeply resent having Western actors pressure their community leaders into a certain course of action.

Importance of a GNA which emerges from the Libyans

An internationally recognised political process culminating in one internationally recognised sovereign government is truly needed for Libya and is the only way out of the vacuum of abstract sovereignty and concrete authority that currently plagues the country. Yet plunging ahead with a flawed agreement and insisting that a parliamentary vote is needed to make the GNA come into effect is perverse.

To my eyes, an HoR vote is not actually necessary as the body’s mandate and sovereignty have long lapsed. But because there was no appetite in Western capitals to acknowledge this fact and withdraw recognition, policymakers are pinned into seeking the HoR’s approval for bureaucratic reasons.

This approach is fueling division at the same time that new bridges of Libyan unity seem to be emerging. The victory of the LNA in Benghazi and Ajdabiya against IS has whipped up nationwide euphoria, albeit with reservations and some (in the case of minority hardline Islamist factions controlling Tripoli) outright condemnation.

Moving beyond Haftar can create a real Libyan national army

General Khalifa Haftar has long promised victory in Benghazi and his record thus far has been abysmal. By all accounts, he is a megalomaniac, senile, and lacking in diplomatic tact.

He was discarded first by the former Libyan leader Muammar Gaddafi and then by the CIA for his lack of results. His spring 2014 coup against the Libyan government failed. His ensuing Operation Dignity contested the same strategic Benghazi neighbourhoods for almost two years with little-to-no progress made. He frequently cried wolf - declaring Benghazi liberated. These false pronouncements were broadcast and then repudiated by the international media, destroying his credibility.

He has remained a polarizing figure and it will be difficult for unity to be achieved with him as the figurehead of the army.

And yet his movement is now finally transcending him and achieving something. Why then is the world not paying attention and lauding this achievement? Doing so could be the key to bringing new stakeholders on board. Western diplomacy could be useful in easing Haftar out of power and letting his movement be led by a compromise candidate able to unify, rather than divide, Libya's factions.

Spread of IS finally occasioning a backlash

This breakthrough was occasioned by the shock emergence of IS in Sabratha after the 19 February US air strike, and their ensuing occupation of the city, which culminated in the beheading of 12 police officers before the IS were chased out of town. Until these events, IS had been understood as a threat only to eastern Libya and the environs of Sirte. Now, the reality of powerful IS cells in western Libya is fuelling a sense of betrayal with the local Islamists and the GNC-affiliated militias who control Tripoli.

These simultaneous negative developments in the east and west of Libya could allow the bypassing of the political divisions which have plagued the UN-mediated process and allow a genuine anti-IS coalition to emerge.

Victories have a proven track record for healing social divisions. Over the past days in the east, the tensions between the LNA and the Federalists were bypassed, allowing for Ajdabiya to be taken from extremists without tribal infighting.

The distrust between former Gaddafi soldiers and anti-Gaddafi tribes in eastern Libya seems to be waning, as both the former green, and the current Libyan flag, were being carried by LNA soldiers. In the west, communities constantly at war with each other since 2011, such as Zawiya, Zintan, Janzour and Wershefana are preparing to fight IS near Sabratha.

A bottom-up political process imbued with true Libyan legitimacy may finally be materialising. It looks fundamentally different than an artificially imposed top-down process - and this is what the West should support.

If the international community could meaningfully support the Libyans in a fight against IS over which they have local ownership, we are far more likely to get a favourable outcome than if we impose a hand-picked Western government and demand that it call on the West for assistance in fighting IS.

- Jason Pack is the founder of EyeOnISinLibya.com and an affiliated analyst at Risk Intelligence.

Photo: A fighter loyal to Libya’s pro-House of Representatives (HoR) government celebrates in the street in Benghazi as they come close to seizing the centre of the eastern coastal city on 23 February, 2016, after a string of gains against militants including the Islamic State group (AFP). 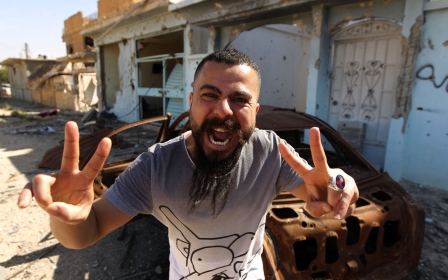