Amr Khalifa
Islamic State is only one of the threats to Egypt's Christians, the others being state discrimination and religious intolerance 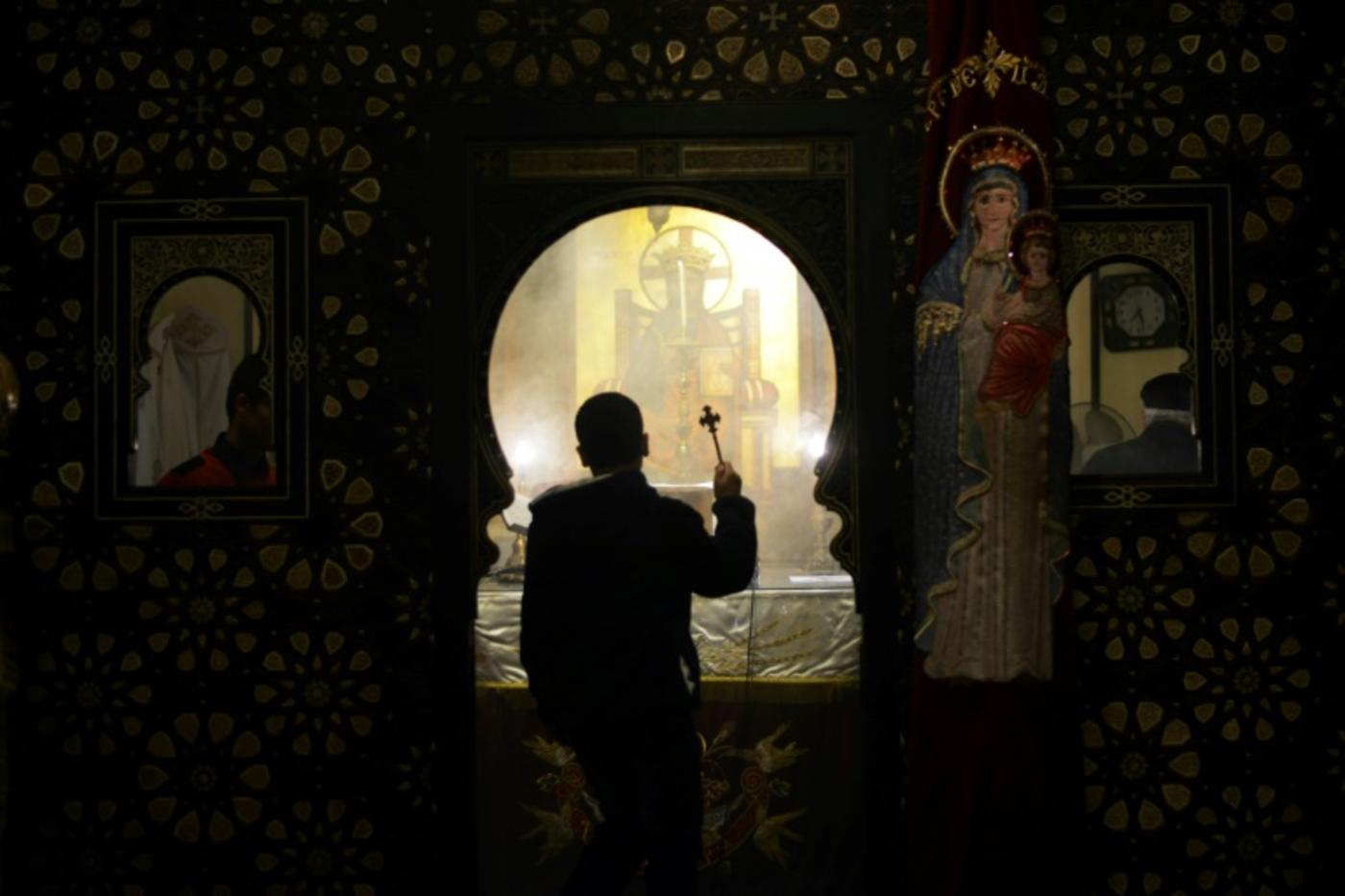 While pictures of distraught Christian women, forced to flee from Northern Sinai after suspected attacks by Islamic State (IS), greeted Egyptians watching the news on Friday morning, President Abdel Fattah al-Sisi was riding his bike in downtown Cairo.

Later after wrapping up his dawn ride with police trainees, Sisi told a crowd gathered at the police academy that, as at least 100 Coptic families fled El Arish, “no one will be able to touch the nation’s dignity”.

And then there were the headlines that followed:

As part of an insurgency which has continued to rage against a disorganised Egyptian military, IS’s Sinai branch declared war on Egyptian Christians in a video released earlier this month.

Christians, IS says in the video, are its “favourite prey” and, according to reports, the group has "kill lists" which include the names of at least 40 Christians. At least 10 were killed in the past month.

But rather than tackling the issue, the government glosses over what is really happening in Sinai where terrorists dictate the destructive how, who and when far more than the government is willing to admit. This is not a simple battle between terrorists and Christians, as the government would have it.

Instead, Egypt’s Christian community faces a triangle of terror – against an indiscriminate fight in Sinai, a prejudiced state system and an army of ignorant, repressed militants - that is much more pervasive and impossible to triumph against with missiles and guns alone.

Cover up in the Sinai

The Egyptian government has much to hide in Sinai. Nearly every day, there are IED attacks by the militants on police and army vehicles that kill, wound, and maim. There are snipers lying in wait for poorly defended recruits and car bombs which kill indiscriminately.

Rather than entrench well-trained, specialised soldiers to fight IS forces who are local and, therefore, have a home-team advantage in this guerilla warfare, the army continues to throw ill-equipped and poorly trained conscripts at the problem. The high casualty rates that result are a propaganda boon for IS.

Against this background, it should surprise no one that the army panics and retaliates with inordinately inaccurate missiles into civilian areas.

On the very same day that hundreds of Christians fled Arish, there were two local reports of a 10-year-old child killed and 26-year-old man injured by army fire.

Additionally, there was a local man reportedly killed hours after being kidnapped by the militants in Arish and a conscript sniped west of Rafah.

In a Muslim-majority nation with a population that has likely surged past the 92 million mark, the number of Christians actually in the country is, in itself, a question.

The truth is that the myth of Christians and Muslims unification is, largely, a state production

Speak to Coptic Orthodox Church officials, and you will hear that Christians comprise over 10 percent of the population. But in 2011, Pew Research found that Egypt’s Christian population peaked in 1927 at 8 percent, dropping to five percent, according to the last data available, collected in 2008.

But it’s hard to know what figures to believe. Exact data has been guarded by consecutive regimes which believe that the sensitivity of the issue - and the degree of injustice they might reveal - makes it a national security secret.

The truth is that the myth of Christians and Muslims unification is, largely, a state production. To present a unified, non-sectarian Egypt is to maintain the facade of a nation of equals, and more importantly, one that is not in need of change. Nothing could be further from the truth.

Yes, Christians and Muslims protected one another while they prayed in Tahrir Square during the glorious 18 days of the revolution but these moments are the exception to the rule.

Step into a Cairo cab and one of the first questions you encounter is “are you Muslim or Christian?” While it is only whispered about in back rooms, there are certain Muslim-run businesses that will not hire Christians and, in some cases, the opposite is true as well.

It is widely understood that the most sensitive of posts in Egypt’s executive, legislative, and judicial branches along with academia, police and military are out of reach for Christians. Structurally, the system is tilted to favour the Muslim majority.

Despite what the government, the church and Al Azhar wish to present to the West – and what the heads of both religious institutions flanking Sisi said on the day of the coup - the rule in Egypt is separate but unequal.

There is also more division than unity at the grassroots level. The practices of mosques and Sunday schools are not consistent with the intent of the holy books and division often springs from discussions circles after teachings.

Changing this doesn't require modifying "religious speech", as Sisi and the regime have indicated, but rather breaking down the invisible wall between Christians and Muslims - a wall which, in the end, is not about religion at all.

Some Christians, initially, felt that Sisi was 'sent from heaven' but the reality is closer to hell

As Mina Thabet, programme director of the Egyptian Commission for Rights and Freedoms told me, for Christians, the divide is not driven by an extreme doctrine in their religion, but about an isolationist self-defence mechanism born on the back of repeated negative experiences within the community.

And while there are millions upon millions of well-meaning Egyptian Muslims, there is, equally, little doubt there are many Muslims who adopt an implicitly and explicitly separatist stance far removed from what the Quran teaches.

Though Sisi said, after the Sinai church bombing in December that killed 29, "we will never be torn apart", facts on the ground continue to belie this. Some Christians, initially, felt that Sisi was "sent from heaven" but the reality is closer to hell.

The first bullets, it would seem, are fired by society.

Years ago, after a distant cousin failed to attain the desired result in his all-important high school exams, he puffed on a cigarette in his bedroom balcony away from his parent’s prying eyes and posited that Christians were to blame.

“They study together in groups. This helps them obtain higher grades and pushes students like me from the upper circles,” he said.

He looked down at the ground disgustedly and made the sign of the cross on his wrists. With even more disgust, I backed away. That was the last time I saw him for several years.

Literal interpretation of the Quran (with the inherent potential for warping), combined with high levels of ignorance and anger at the state and those they perceive as its strongest allies – Christians - makes IS the third side of this triangle of terror.

Of course, no one of sane mind believes those towing the IS line in Sinai, formerly known as Wilayat Sinai, are Muslim. Islam does not espouse murder of innocents of any faith.

But given the feeble security strategy in Sinai, the linear relationship between oppression and the explosion of terrorism and non-existent economic solutions, the situation for Christians in Northern Sinai has become a powder keg.

It is the most simplistic of strategies: zero economic opportunity for locals is blamed on Christians, demonisation and othering are the name of the IS game.

Even old friends of Christian families, Thabet told me, started to tell them to leave Arish two years ago. Later, they would discover that their "friend" had become a member of IS.

Having written extensively on Sinai, I have stated that the stick cannot be the sole means to crush IS in Sinai. Mina Thabet, after tending to vulnerable Christian families forced to move from Arish to Ismailiyia, wrote: “For the thousandth time, fighting terror does not take place with guns, howitzers or planes.”

Enough division and lies: if Cairo does not want to see a macabre repeat of the church bombing two months ago, it must stop applying Band-Aids to bullets to the heart

Many things, he believes, are crucial: a strong security solution employing specially trained forces, bridging the political divide and allowing researchers to study the phenomenon up close.

He is right, but there also has to be a clearly delineated, well-funded economic solution for northern Sinai in particular, coupled with education and justice. Failing this, the sectarian divide will only expand as it has consistently done in the south of the country.

Enough division and lies: if Cairo does not want to see a macabre repeat of the church bombing two months ago, it must stop applying Band-Aids to bullets to the heart.

If Sisi does not turn 180 degrees on the Sinai issue, in general, and the Christian dilemma, in particular, not only will Egyptians suffer but he may not be around, as president, long enough to attempt to solve the triangle of terror.