West's attack on Syria offers no balm for Netanyahu 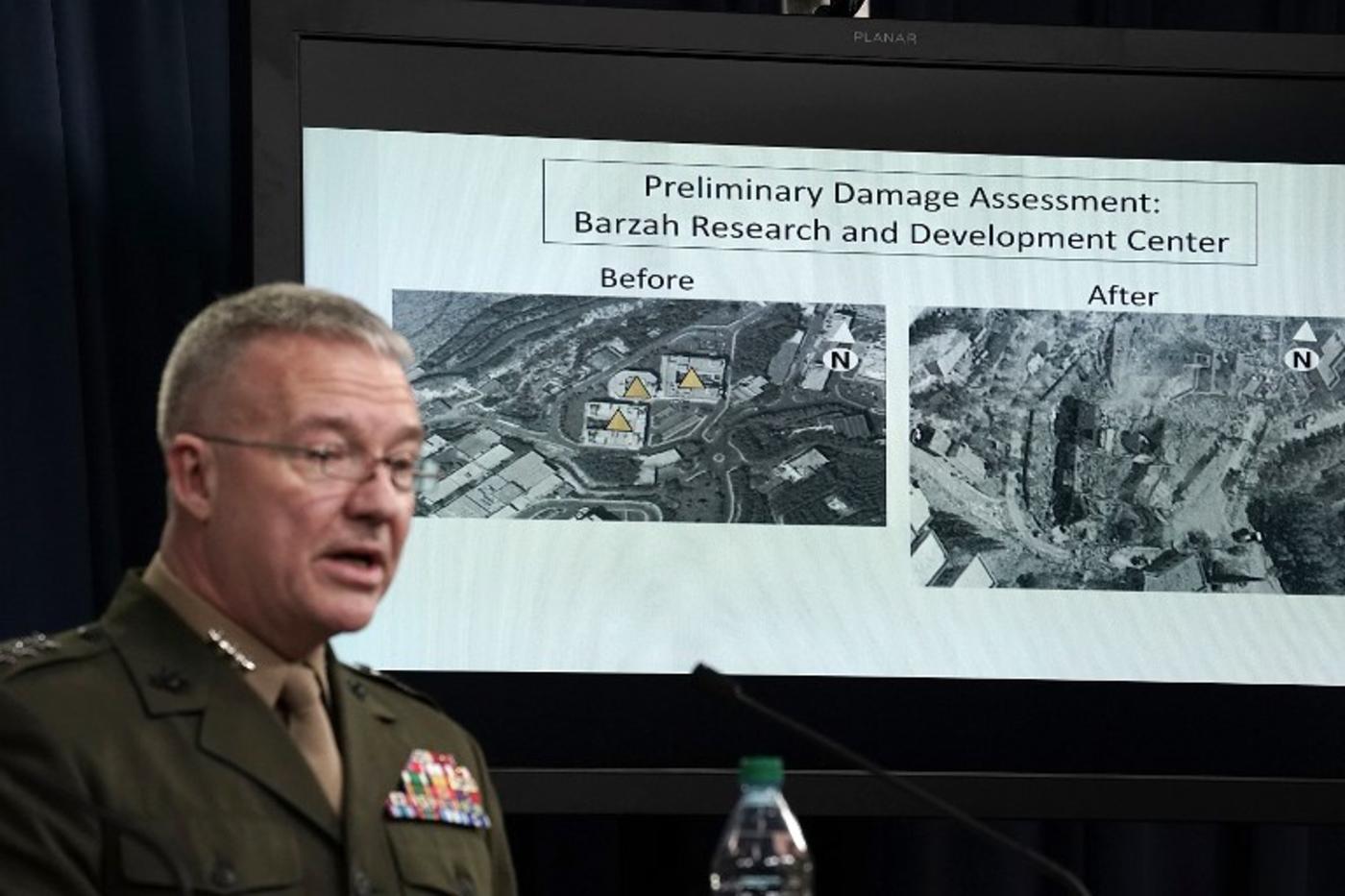 Last Friday, the US, France and Britain attacked Syria’s chemical weapons facilities in response to an alleged regime attack on a rebel stronghold in Douma, which killed at least 40 civilians. The coordinated air assault was a major escalation in the conflict and the first joint Western military operation targeting the Assad regime in the history of the civil war.

The US launched Tomahawk missiles from its ships in the Mediterranean, and French and British pilots also launched strikes against three locations in Syria which contributed to the manufacture and weaponization of President Bashar al-Assad's chemical weapons cache. The Syrians claimed that they intercepted and destroyed at least eight of the missiles before they struck their targets.

The strike was much more robust than an attack by the US against Syria last year after a similar chemical weapons attack, but there were also strict limits on this new assault. Though President Donald Trump said the US reserved the right to strike again should Syria use such weapons in future, Defense Secretary James Mattis pointedly said the attack was a one-off event and that operations had now ended.

Reporters asked whether the US had considered targeting Iranian assets in Syria, which is a sensitive point for Israel. The response was clear: no:

Q.: Can you talk a little bit about any Iran targets that you were initially - Iran-associated targets, that you initially considered, and why you may have not gone to them?

SEC. MATTIS: … As far as any other targets, we looked at targets specifically designed to address the chemical weapons threat that we have seen manifested…Those were the only targets that we were examining for prosecution.

This will be a major disappointment to Israeli Prime Minister Benjamin Netanyahu, who has witnessed an increasing encroachment by Hezbollah and Iranian forces in southwest Syria. As Assad asserts more control over Syrian territory formerly held by rebels, Iran and Hezbollah have increased their military presence along the Golan frontier. The Iran Revolutionary Guards are taking payment for their aid to the regime in the form of permanent air and military installations inside the country.

Israel sees these new facilities and Iran's increasingly muscular approach in Syria and fears the prospect of a new northern front it must defend. It is used to the threat of Hezbollah on the Lebanese front. But the thought of a second front opening in Syria is a bridge too far for Israel.

Even before this development, Israel saw Hezbollah as its most formidable frontline adversary. It fought a vicious war in 2006 in which the Lebanese militia acquitted itself surprisingly well in defending its southern Lebanese stronghold. The Israel army for years has been planning for a renewed engagement with Hezbollah. The question wasn't if there would be a new conflict, but when.

Netanyahu and his predecessors have proven unable for more than a decade to persuade US presidents to attack Iran's nuclear facilities. But with a much friendlier administration, Israel certainly hopes, and perhaps even expects, a more amenable response to such entreaties

Netanyahu has attempted a two-pronged approach to dent the Iranian offensive: he's reached out to Russian President Vladimir Putin to persuade him to renounce the Russian alliance with the Iranians. But Israel has very little it can offer Russia, and Putin has too much invested in Syria for him to suddenly turn on his Iranian ally.

The result of this frustration has been repeated warnings by Israel that it will not tolerate Iran's presence on the Israeli border. If any state would be responsible should Israel take aggressive action to fend off the Iranian threat, it would be Russia.

The second prong of the Israeli approach involves the US. Netanyahu and his predecessors have proven unable for more than a decade to persuade US presidents to attack Iran's nuclear facilities. But with a much friendlier administration, Israel certainly hopes, and perhaps even expects, a more amenable response to such entreaties.

While Trump has shown hostility to Iran, he's not yet been willing to translate his words into action. He has not renounced the P5+1 nuclear accord with Iran. Nor has he threatened the Iranian regime with military action. He has offered the conventional threat offered by both his predecessors that developing a nuclear weapon would be a red line for the US

But so far, Trump seems to focused on other issues. He wants to destroy the Islamic State group. And Syria is the last region in which the Islamist group has a territorial toehold. So he naturally has an interest in what happens there.

However, this could change: Trump himself is extremely volatile and prone to reverse course in an instant. In addition, the president has appointed two extremely hawkish, anti-Iran figures in John Bolton as national security advisor and Mike Pompeo as secretary of state-designate.

They will certainly plot a much more aggressive approach against Iran than Trump has followed in his first year in office. But tellingly, the recent Syria attack offered an excellent opportunity to piggyback on the anti-chemical weapons operation with an assault on Iran's military infrastructure in Syria. Yet the administration chose to restrict itself only to the proximate cause: the chemical weapons facilities.

It remains to be seen whether Trump will be loath to enter into a military adventure with Israel against Iran; or whether his new advisers are merely biding their time until a better opportunity arises.

If the US ultimately refuses to mount an offensive against Iran's nuclear facilities (and its interventions in conflicts in Yemen, Syria and elsewhere in the region), it will leave Israel high and dry. While this may restrict the damage that can be done to Iran, it also serves as a wild card. Leaving Israel to its own devices in confronting Iran could open a Pandora's Box of military adventurism.

It's no accident that the Israeli military censor relaxed a prohibition against reporting on Israel's 2007 attack on a purported Syrian nuclear reactor. The removal of this decade-long restriction was engineered by the Israeli military-intelligence apparatus to warn Iran of Israel's offensive capabilities.

For example, when Iran flew a drone into Israeli airspace last month, the military not only shot the vehicle down, it mounted an attack on the airfield in Syria from which the drone was launched. An intense Syrian anti-aircraft defence struck an Israeli F-16, which crashed in Israel.

This was the first time Syria had shot down an Israeli warplane since 1982, and an outcome Israel could not countenance. So it followed with an even more massive response against a wide array of Iranian installations in Syria. These are precisely the sorts of escalations that can lead to miscalculations and possible regional war.

Earlier this week, Israel launched a new attack on the airbase it had previously targeted. This time, Syria air defences were prepared and claimed to have shot down most of the incoming Israeli missiles. Several did hit their target and 14 Iranian troops, including the commander of the base, were killed.

The Russian response was very different from the hands-off approach of the past. Russia exposed the Israeli role in the attack. It revealed that President Putin had telephoned Netanyahu to warn him that there would be no more free rides. Subsequent Israeli attacks would be met with full force.

The implications were that Russian missile defences, far more formidable than Syria's own, would be used to defend targets in Syria. Putin was essentially calling off the former de-confliction agreement negotiated with Netanyahu. He was laying down a marker and warning the Israeli leader that the latter's future course of action would be more limited than in the past.

That's why Netanyahu's braggadocio at last week’s Holocaust Memorial Day speech in which he warned Iran "not to test our resolve" seems relatively empty. It's unlikely the US will remain engaged in the quagmire there. Trump has no stomach for it.

If that's the case, then Bibi will have no partner to attack Iran. He could turn to his new friends in Saudi Arabia. But I doubt that even combined they have sufficient muscle to launch a coordinated attack on Iran's nuclear and military capability. That makes Bibi a figure like the Scarecrow in The Wizard of Oz, a sack of straw in the form of a man.

Ever since Russia began its alliance with Assad, Putin has played his cards cautiously. He's enlarged Russia's footprint, helped to stabilise the regime and its control, on the one hand. But he's also acted judiciously and not tangled with the numerous external players involved in the Syrian conflict (Israel, the US, Turkey, Iran, Hezbollah).

When there were accidents like the shooting down of a Russian bomber, Putin quickly resolved the matter. Turkey's President Erdogan took responsibility, apologies were made and that was the end of it. Will he continue on this path or will he "feel his oats" and test Western resolve by standing up to the attack?

My guess is that Putin feels the attack will be a momentary one; and that these Western powers will not have the stomach for an extended engagement in Syria. He has bigger fish to fry - especially after the recent summit involving Russia, Turkey and Iran which sought to lay out the parameters of a post-war Syria.

Putin probably feels that this is a much more productive and manageable approach than tangling with Trump, who he surely believes is a lightweight, almost non-entity.

Photo: US Marine Lt. Gen. Kenneth F. McKenzie Jr. speaks during a news briefing at the Pentagon on 14 April (AFP)