Live
LIVE: Aleppo evacuations
MEE reports on the latest updates from the evacuation taking place of civilians and rebels out of east Aleppo 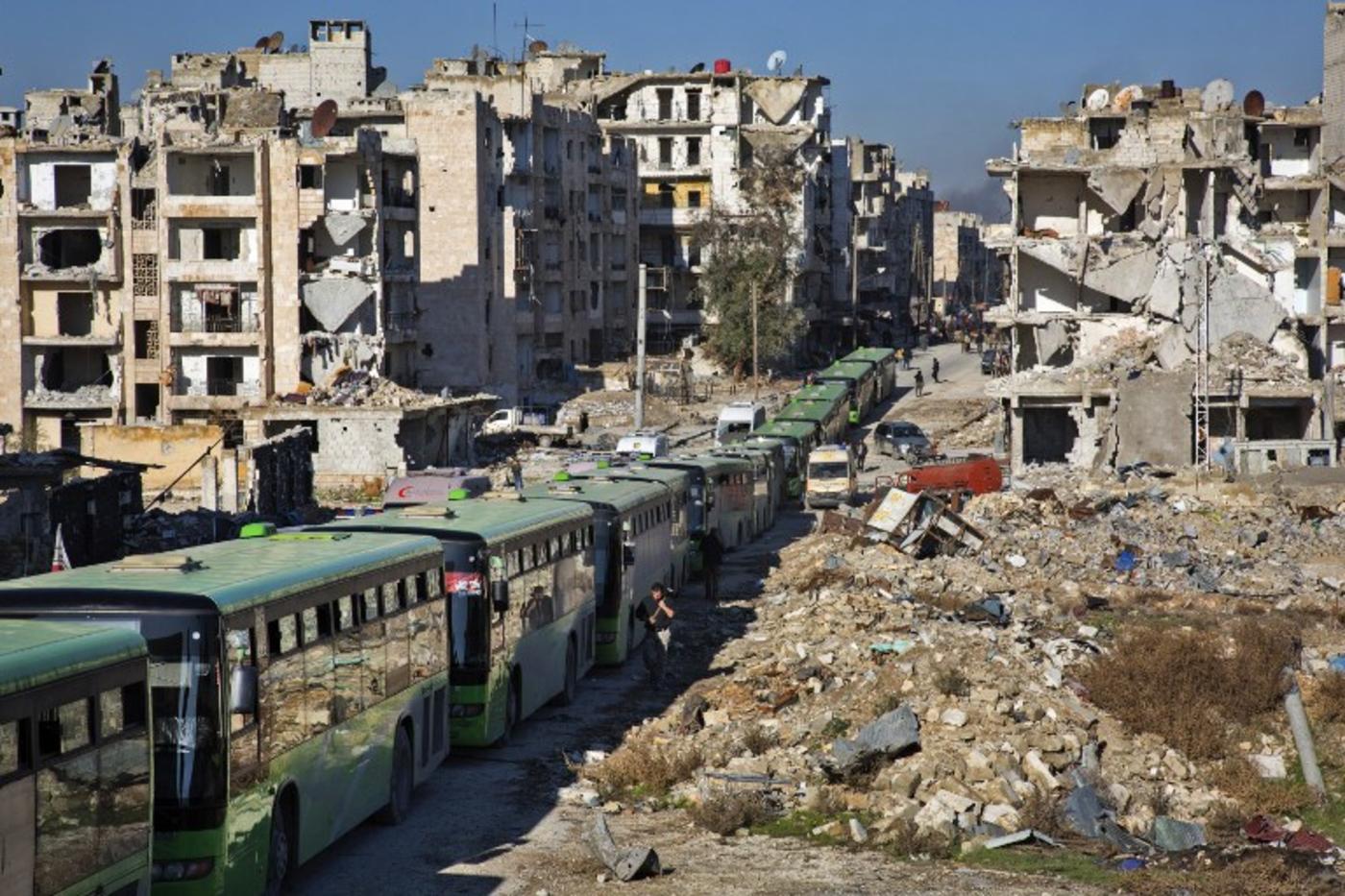 Past UN resolutions vetoed by Russia
5 years ago

MEE's graphics team have produced a brief timeline of UN resolutions vetoed by Russia and China since 2011.

The United Nations Security Council unanimously adopted a motion to deploy monitors to oversee the evacuation of residents from eastern Aleppo.

Moscow agreed to vote for the motion after previously threatening to veto the emergency resolution following intense negotiations between Russia and France.

United Nation observers will now be deployed to parts of eastern Aleppo to oversee and monitor the last remaining evacautions.

5,000 people are travelling in 75 buses out of Aleppo said Ingy Sedky, spokeswoman for the International Committee of the Red Cross.

Families had spent hours waiting in below-freezing temperatures, sheltering from the rain in bombed-out apartment blocks and waiting desperately for news on a new wave of departures.

Turkish NGO IHH reporting that 3,000 people have been evacuated from Aleppo with 51 buses.

Since last night approximately 3000 people have been evacuated from #Aleppo with 51 buses. Hopefully remaining people will also be rescued. pic.twitter.com/CRrhGWI6ii

The video shows the thousands left waiting behind a line of representatives from the Syrian Arab Red Crescent.

From inside the besieged neighborhoods in #Aleppo, How is the evacuation to the west countryside #Step_News #Syria https://t.co/AxLlQhnJV4 pic.twitter.com/d6bVIiwZJY

Hundreds are being evacuated from the pro-government villages of Kafraya and Fouah near Idlib after being besieged by rebels for months.

Buses bound for the villages were set alight yesterday by rebel groups which led to the second round of evacuations from eastern Aleppo being halted by the Syrian government.

Evacuation buses reached the villages of Foua and Kefraya on Sunday afternoon, raising hopes that the evacuation of those villages and rebel-held parts of Aleppo could resume soon.

The situation in Foua and Kefraya has been a major sticking point in negotiations over the fate of Aleppo, with the Syrian government demanding that they are evacuated at the same time as the last rebel-held pockets of Aleppo.

Around 1,200 people will be evacuated from the two Shia-majority villages, state media reported, and a similar number will be moved out of east Aleppo if all goes according to plan.

Syrian state television reported on Sunday afternoon that fighters and civilians will be allowed to leave Aleppo in exchange for the successful evacuation of Fouah and Kefraya, which are besieged by rebel forces.

Evacuation buses arrive back in Aleppo: State media
5 years ago

The report said the buses were being monitored by the International Committee of the Red Cross (ICRC), which had said it hoped to be able to resume evacuations on Sunday.

Rebels and civilians will reportedly both be evacuated.

Up to 10,000 people are expected to be evacuated if a deal is agreed between the negotiating parties, who reportedly continued talks into Sunday morning.

Footage shot by Turkish news agency TRT World on Sunday morning showed the transfer point in Aleppo, where people will be loaded on to buses, empty.

TRT World has reached to the closest transfer point in Aleppo. @Ediz99 will report live at 10GMT. @trtworld pic.twitter.com/0x1umAO29d

A key rebel group in negotiations over the evacuation of Aleppo says Russia is failing to rein in its Iranian ally, which it accused of holding up the deal.

Munir al-Sayal, the head of the political wing of the Ahrar al-Sham rebel group involved in negotiations over the deal, said Iran was insisting people be allowed to leave two besieged Shia villages before the Aleppo evacuation could begin.

Green evacuation buses reportedly headed to the rebel-beseiged Shia villages of Fouah and Kefraya on Saturday morning. But families in Aleppo remained waiting in temperatures close to freezing for evacuations from their district - the last remaining rebel-held pocket in the city – to be restarted.

"Iran and its sectarian proxies are using the humanitarian situation of our people in besieged Aleppo and preventing civilians from leaving until the evacuation of their groups in Fouah and Kefraya," Sayal told Reuters.

We are LIVE at the Aleppo march in London
5 years ago
Bilal Abdul Karim sends latest update from freezing, bombed-out hospital
5 years ago

Bilal Abdel Karim, the last Western journalist in east Aleppo, has shared his latest video from the ravaged and besieged enclave.

He is standing in the remains of a hospital, and the video shows dried blood coating the walls and patients sleeping on the frozen floors.

Patients freezing in a bombed out hospital. Dried blood on the walls and floor.
This is life in E. Aleppo. pic.twitter.com/00aMwdSUtE

The Security Council has called another emergency meeting to discuss the situation in Aleppo, according to a report in the Independent. France's ambassador, Francois Delattre, said on Friday that the Security Council will be meeting on how to safely evacuate civilians trapped in the besieged areas of the city.

Only a day after the evacuation of Aleppo residents began, numerous reports emerged that a convoy of at least 800 civilians was taken hostage by pro-Assad militias near Ramoussa on Friday.

“A group of cars carrying hundreds of people out of east Aleppo was stopped by tanks belonging to Shia militias and taken hostage for two hours,” said Seraj Alomar, manager of Boraq news agency and a witness who was on the convoy.

Protests at Russian embassy in DC
5 years ago

Protesters gathered in front of the Russian embassy in Washington, DC late on Friday night.

Off to the Russian ambassador's home Standing for #Aleppo at The White House. Washington DC, THANK YOU Syrian Americans & Washington DC pic.twitter.com/SFVfPtEtzk

These ppl waited in cold & rain all day to leave E. Aleppo, only to flee in panic amid gunfire after deal broke down. One guy crying /1 pic.twitter.com/HwZEAW6cPA

Middle East Eye’s contributor Zouhir al-Shimale was at the scene and confirmed what happened.

“In the eastern part of the city, they started shooting people. Around 1,000 people in the street ran and yelled ‘save your lives’. The chaos was pretty unbelievable.”

According to an Al Jazeera report, four people were killed in the gunfire in the besieged districts of Aleppo by pro-Assad soldiers.

"They forced us out of the vehicles, forced us to lay flat on the ground, stripped us of our clothes and then we heard gunfire," a suspect told Al Jazeera.

"When we looked up, we noticed three or four people were killed."