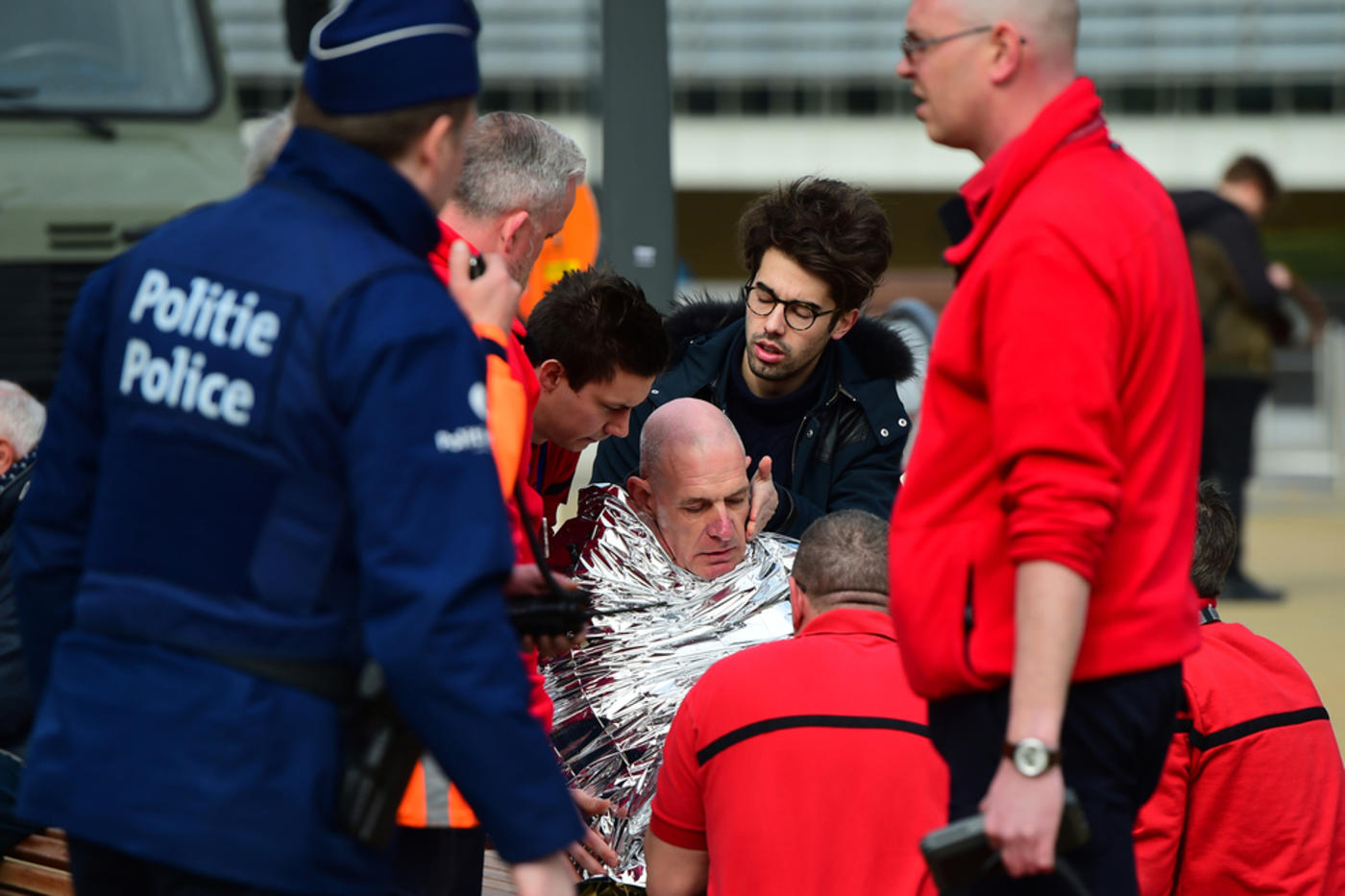 The United States warned its citizens on Tuesday of the "potential risks" of European travel following a spate of terror attacks, including the latest bombings in Belgium.

"The State Department alerts US citizens to potential risks of travel to and throughout Europe following several terrorist attacks, including the 22 March attacks in Brussels claimed by ISIL," the agency said, referring to the Islamic State (IS) group.

"US citizens should exercise vigilance when in public places or using mass transportation," the State Department said.

"Be aware of immediate surroundings and avoid crowded places. Exercise particular caution during religious holidays and at large festivals or events."

It noted that European governments were also guarding against attacks and conducting raids to disrupt plots.

"We work closely with our allies and will continue to share information with our European partners that will help identify and counter terrorist threats," the State Department said.

The FBI and the New York Police Department (NYPD) are sending detectives to investigate the Brussels attacks given that US citizens are among the casualties, a senior police officer announced on Tuesday.

"Because there are Americans among the casualties and US persons in the attack in Belgium, there will be an FBI investigation coming out of the New York City Joint Terrorism Task Force," Miller told reporters.

"We expect agents and New York City detectives, or Task Force officers, to be gearing up to leave for that investigation overseas as early as tonight or tomorrow."

NYPD detectives and FBI agents from the task force have been involved in numerous international terrorism investigations, including the US embassy bombings in East Africa in 1998 and the attack on the USS Cole in 2000.

Several Americans were injured in Tuesday's attacks in Brussels, officials said, including a Mormon missionary.

Mason Wells, 19, was among three US missionaries from Utah who were seriously wounded in the blasts at the Belgian capital's airport, the Church of Jesus Christ of Latter-day Saints said in a statement.

Utah's Deseret News daily quoted a friend of the Wells family as saying the teen and Empey had both suffered burns and other injuries.

Wells "has burns to his hands and legs and some to his face," Lloyd Coleman told the paper.

"Most of the damage is around his foot and ankle. A heel took the most damage, and the doctors are repairing it, but the family doesn't know how bad the injury is."

The US Air Force said one of its service members and several of his relatives had also been injured in Tuesday's attacks in the Belgian capital that killed at least 34 people.

"The United States Air Force can confirm that one US Air Force service member from Joint Force Command Brunssum, Netherlands, was injured in today's horrific attack at the airport in Brussels," a statement said, referring to a NATO command.

"The airman's family was also present and has sustained various injuries. Due to privacy concerns, we are not releasing the status of their injuries."

"Brussels I love you" says the message written in chalk on a historic city square, a place for raucous celebration that has become a scene of grief after Belgium's worst terror attacks on Tuesday.

Wrapped in the national flag and carrying candles and flowers, Belgians flocked by the hundreds by nightfall to the Place de la Bourse in the ancient heart of the city to mourn the dead.

A lone musician played a cello as a mourner waved a banner reading "United against hate" and another message scrawled on the ground said: "Christians + Muslims + Jews = humanity".

"It's important to get together after moments like these," Leila Devin, 22, told AFP. "It shows we're united against terror."

"Tonight I am Belgian," an emotional Juncker said.

"It's sad, it's unfortunate, it's shocking," said Sofiane, an Algerian student, who had come to pay her respects.

Belgium attackers' bombs were hidden in their luggage: Local mayor
5 years ago

The mayor of Zaventem, where the Brussels airport is located, has told AFP that the suicide attackers who struck the airport on Tuesday had their bombs hidden in their luggage.

"They came in a taxi with their suitcases. Their bombs were in their bags," mayor Francis Vermeiren said.

"They put their suitcases on trolleys; the first two bombs exploded. The third also put his on a trolley but he must have panicked - it didn't explode," he added.

The French Interior Minister on Tuesday night renewed his call for stricter borders to be imposed within the European Union following today's deadly attacks in neighbouring Belgium.

Speaking on the France 2 television channel, Bernard Cazeneuve urged the European Parliament to implement security plans that would allow members of the visa-free Schengen travel zone to retain the information of all EU passengers flying within the zone.

Cazeneuve pushed for the restrictions, known as Passenger Name Record (PNR), to be implemented on an accelerated time-scale following attacks in Paris last November that killed 130 people.

However, since his call for them the plan has floundered, with critical MEPs citing concerns over civil liberties.

They have now pledged to finalise a draft of a directive by the end of the year.

On Tuesday night Cazeneuve said the European Parliament must act to implement the PNR.

"The European Parliament has to understand that to fail to push forward with PNR would be to deprive [the EU] of an effective tool against terror."

Zaventem Airport to remain closed all day tomorrow
5 years ago

The airport targeted in this morning's bomb attacks will remain closed all day tomorrow, the European air safety agency has just said.

We have now received confirmation that Brussels airport will be closed all day tomorrow, Wednesday. https://t.co/ilH5XqlDkM

Main attacks in Europe
5 years ago

3 arrested in Germany over Brussels attacks
5 years ago

Three people were arrested in Germany on Tuesday night, suspected of links to attacks in Brussels.

The three had travelled to Germany from the Belgian capital earlier in the day, Al Jazeera reported.

Paris mourns with Brussels
5 years ago

Hundreds of Parisians marched on Tuesday evening to show solidarity with Brussels. The French capital was rocked by a string of attacks in November that killed 130 people. While IS claimed both attacks Belgium authorities are still saying it is "too early" to connect the two incidents.

European landmarks light up in support
5 years ago

Several notabe European landmarks have been illuminated with the Belgium flag as a sign of support to the Brussels victims.

Belgian police have found a bomb and an Islamic State flag during a search of a Brussels apartment carried out hours after deadly attacks.

"The searches that took place in the Schaerbeek (district) found an explosive device containing among other things nails," the federal prosecutor said in a statement.

The district is on the eastern side of Brussels and not next to the Molenbeek district which has thus far been the centre of anti-militant raids.

"Investigators also discovered chemicals and a flag of the Islamic State," the federal prosecutor added.

Italians march in support of Belgium victims
5 years ago

Crowds gathered in the Italian city of Turin for a rally marking the memory of the victims of the attacks in Brussels. People held signs saying "No to Terrorism" and waved EU flags as a sign of solidarity.

Several raids under way across Belgium
5 years ago

Police raids are under way across Belgium on Tuesday evening, the federal prosecutor said. Searches were taking place "in several parts of the country" and "several witnesses also were being heard," Frederic Van Leeuw said.

While some transport was re-opened after 4pm local time (15.00GMT) many have continued to stay indoors.

Rolf Krieger, who runs a market stall in the city centre, told MEE: “I’ve never known the city to be so quiet. Everywhere is empty. People are clearly very scared, and are staying in.”

“We were all told that something like this was going to happen, but that doesn’t make it any easier to cope with,” he added.

Lise Roy, 19, who commutes across Brussels everyday, said: “You don’t get any more cowardly than murdering innocent people going to work.”

“These murderers don’t know what they want, they just want to destroy everything, and spread fear.”