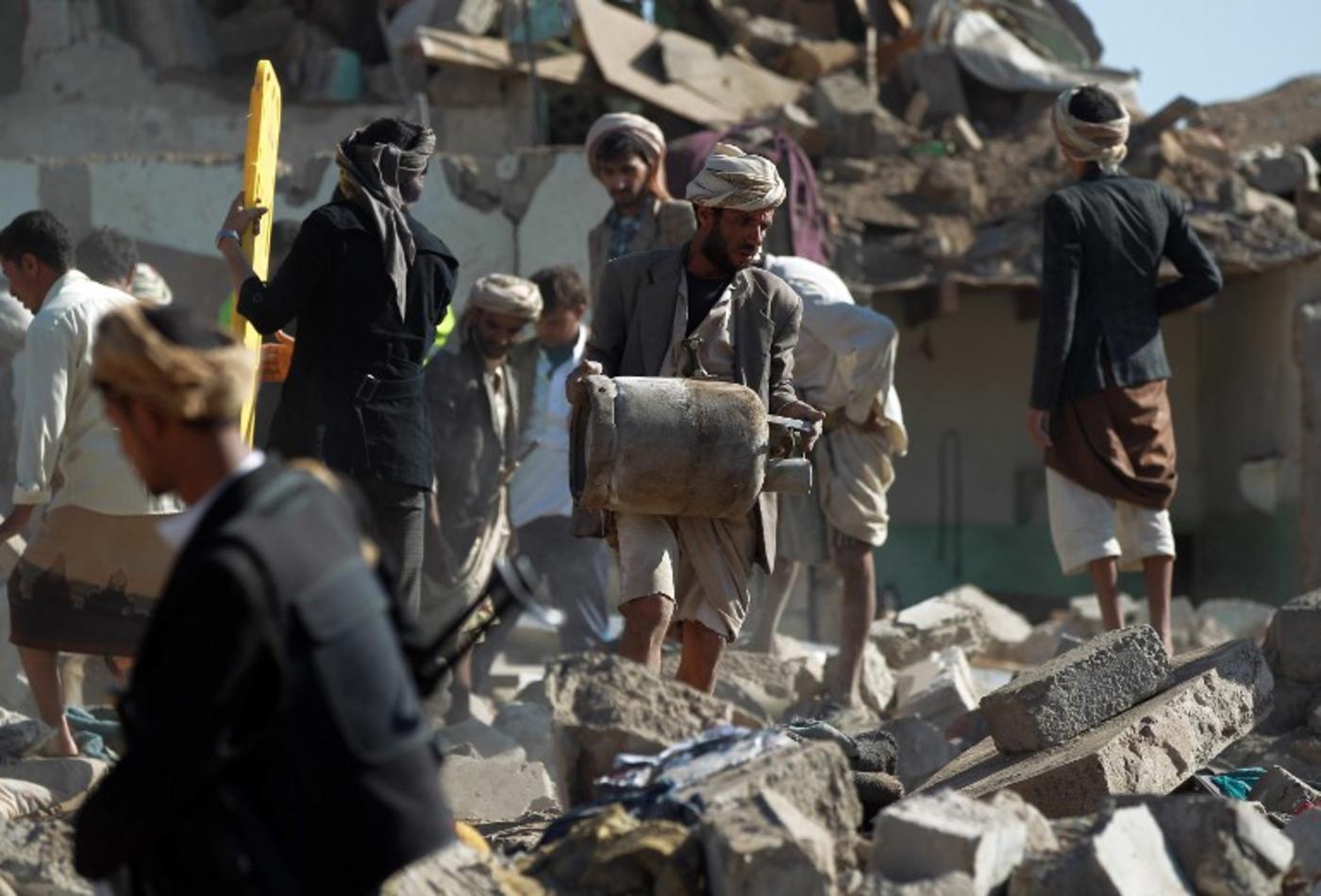 Round-up of events of overnight:

- Saudi officials considering deploying as many as 150,000 troops and 100 warplanes to operation that includes Egypt, Morocco, Jordan, Sudan, Kuwait, the United Arab Emirates, Qatar and Bahrain

- US providing “logistical and intelligence support” to the Saudi-led forces

President Barack Obama offered US support for air strikes led by Saudi Arabia and Gulf allies on rebel camps in Yemen during a phone call with King Salman, the White House said Friday.

"The President and King Salman agreed that our collective goal is to achieve lasting stability in Yemen through a negotiated political solution facilitated by the United Nations and involving all parties as envisioned in the GCC Initiative," National Security Council spokeswoman Bernadette Meehan said in a statement.

The US military has rescued two Saudi pilots who were ejected from their jets off Yemen's coast, as the kingdom launched air strikes on rebel camps in its violence-wracked neighbor, officials said Friday.

Cameron and Saudi Arabia's King Salman spoke for the first time since the monarch came to the throne in January, with the prime minister giving his clear backing to the action.

"The prime minister emphasised the UK's firm political support for the Saudi action in Yemen, noting that it was right to do everything possible to deter Huthi aggression, to support President Hadi and his legitimate government," said a spokeswoman for Cameron's Downing Street office.

"They both expressed concern that Huthi action would lead to an escalation in terrorism and extremism" enabling Al-Qaeda and Islamic State jihadists a foothold in Yemen, which would pose a "serious threat to both our nations".

"He reiterated that Britain will do all it can to support the Saudis to stop that from happening and offered to provide further UK support," which the monarch welcomed.

Cameron also urged King Salman to put "strong non-military pressure" on the Huthis, former Yemeni president Ali Abdullah Saleh - suspected of being allied with the rebels - and Iran "to pull back from the brink and engage in the political process in good faith".

The spokeswoman added: "Finally, the prime minister reassured his majesty that while negotiations on Iran's nuclear capabilities are proceeding, the UK would never agree a deal that did not stop Iran getting a nuclear weapon."

Hezbollah leader Hassan Nasrallah delivered a scathing speech directed at Saudi Arabia and its allies for their military operation in Yemen.

“The House of Saud’s failures in Yemen and its loss of control over the country is the real reason for their aggression against Yemen,” he declared.

He drew a comparison between the speed and readiness with which Operation Decisive Storm was implemented, to the non-reaction the same Arab countries had toward the Palestinian people and their struggle against Israeli occupation.

“The Palestinian people did not feel any decisive storm, not even a decisive breeze,” Nasrallah said, mocking the operation’s name.

The Hezbollah leader then listed “three excuses” Saudi Arabia justified its intervening role in Yemen. The first was on the basis to return Yemeni President Abed Rabbo Mansour Hadi back to his position, although Nasrallah pointed out that no war was waged on Tunisia or Egypt when Ben Ali and Mubarak respectively were ousted.

The second excuse, Nasrallah continued, was that Saudi Arabia felt threatened by the new events and developments unfolding in Yemen. “This is Bush’s religion!” Nasrallah exclaimed, referring to the policies of former US president George W Bush embarking on a war based on events beyond his control.

The third excuse, which Nasrallah called “the biggest lie in all of these justifications” was how Saudi Arabia feared Iranian hegemony and perceived Yemen as under the direct influence of Iran.

Nasrallah went on to assert that Iran supports resistance movements against Israel that the bigger Arab countries have ignored, such as the Hamas movement and Hezbollah. At the same time, he rejected that Iran controlled these movements, stating that they provide military and financial support and do not impose their orders.

He lashed out against Saudi Arabia, calling its leaders as lazy fools, and blamed the oil-rich kingdom for the creation and financing of the Islamic State, accusing Prince Bandar as their financial backer. He also accused Saudi Arabia of funding and backing the occupiers against their own Arab brothers.

Yemenis seeking to visit Egypt will have to obtain visas from Egyptian embassies abroad before their arrival to the country, an Egyptian security official said Friday.

Egypt's Interior Ministry has instructed all ports and airports nationwide to bar entry to Yemenis coming from any county unless they had obtained visas beforehand from an Egyptian embassy abroad, the source, requesting anonymity, told the Anadolu Agency.

According to the source, the new regulation – which doesn't apply to Yemenis with Egyptian spouses or mothers – went into effect Thursday.

Saleh calls for Yemen ceasefire, talks in UAE
6 years ago

Yemen's former president Ali Abdullah Saleh, who is close to Shiite Houthi rebels in the country, called Friday for a ceasefire and the resumption of UN-brokered dialogue between warring parties.

In a statement, Saleh urged a "simultaneous" halt in military operations in Yemen by a Saudi-led Arab coalition and by the rebels, and for dialogue to take place in the United Arab Emirates.

A spokesman for a Saudi-led, anti-Houthi coalition said on Friday that Shiite Houthi militants were using civilians as "human shields."

Coalition forces "are doing everything possible to halt the Houthi advance on [the southern city of] Aden," Saudi commander Ahmed al-Asiri said at a press conference held on an airbase in Saudi capital Riyadh.

Al-Asiri urged Yemeni civilians to steer clear of Houthi sites and positions, claiming that Houthi militants were using them as "human shields."

"Our first priority is the safety of Yemeni civilians, which is why we're urging them to avoid Houthi militant concentrations," he said.

Riyadh said the strikes were in response to calls by embattled Yemeni President Abd Rabbuh Mansour Hadi for military intervention to "save the people [of Yemen] from the Houthi militias."

At least 39 civilians have been killed in the Saudi-led Operation Decisive Storm against the Houthis and their allies, officials at the rebel-controlled health ministry in Sanaa said.

My Lord, strikes and anti air crafts from all directions around town. This is the heaviest since it all started. #Yemen #Sanaa

"Five civilians were killed by shelling that targeted homes in Al-Houta [Lahj province's largest city] and wounded several others who have since been taken to hospital," medical sources told the Anadolu Agency.

According to eyewitnesses, several districts of Al-Houta came under intense artillery fire by pro-Saleh forces.

Witnesses say the bombardment began after 20 Shiite Houthi militants were killed in an ambush by anti-Houthi gunmen in Lahj's Al-Wahat district.

Forces loyal to ousted Yemeni President Abdullah Saleh on Friday shelled a residential district in the southern city of Ad Dali, leaving a number of dead and wounded, eyewitnesses have said.

The shelling targeted several residential neighborhoods in both the northern and southern regions of the city, eyewitnesses told the Anadolu Agency.

Medical sources told AA that the shelling had led to "an indeterminate number of casualties," which had since been transferred to nearby hospitals for treatment.

Residents of Ad Dali's southern Al-Aslaf district told AA that the shelling had destroyed an entire home, the injured inhabitants of which had been transferred to a hospital in critical condition.

Meanwhile, residents of Ad Dali's northern Al-Wabh district told AA that the shelling had left two people dead and several wounded, one of whom was in critical condition.

Ad Dali residents have embarked on a mass departure from their homes due to intense shelling, amid fears of continued bombardment.

State television broadcast footage of Hadi's arrival at the summit venue, the Red Sea resort of Sharm El-Sheikh, where he was greeted by President Abdel Fattah al-Sisi.

On Thursday, Hadi flew to the capital of Saudi Arabia, which the same day launched air strikes against the Iran-backed rebels in Yemen at his request.

He will attend the two-day Arab League summit beginning Saturday that is expected to focus on creating an Arab military force, a project that has been given greater impetus by the Saudi-led intervention in Yemen.

-Basma Qassim, a 20-year sociology student who grew up in New York and now lives in the southern port city of Aden.

-Abdulkader al-Guneid, a physician and activist from the central city of Taiz where there have been mass anti-Houthi protests.

-Ammar al-Aulaqi, 34, a filmmaker from Sanaa.

-Sarah Jamal, a 27-year-old researcher and sociologist living in Sanaa.

Erdogan said the international community was concerned over the events taking place in Yemen and said the unity, safety and stability of the country was at risk, presidential sources in Ankara said on Friday.

Salman shared information with the Turkish President about the military operation and airstrikes launched by Saudi Arabia and its Arab allies against Houthi positions in Yemen.

During a televised interview Friday, Mevlut Cavusoglu said: "We said we can give every kind of support, including intelligence, but not military support."

In an interview with French network FRANCE 24 on Thursday, Erdogan said that Ankara may consider providing "logistical support" to the mission.