2,000 killed in Aleppo air-offensive in past five months

UN resolution in works to facilitate humanitarian aid, while reports reveal that nearly 2000 civilians killed in Aleppo in past five months Australia, Luxembourg, and Jordan are planning to circulate a new UN Security Council resolution that diplomats say would allow the delivery of humanitarian aid into Syria through four border points without approval from the Assad government.

Australia's UN Ambassador Gary Quinlan told reporters after a council briefing Thursday on the humanitarian crisis that 90 percent of aid currently "goes to government-held areas," and Syrians in opposition-controlled zones aren't getting food and medicine.

Quinlan said the resolution, which will be circulated "very quickly," will respond to Secretary-General Ban Ki-moon's call for council action, but he gave no details.

Diplomats familiar with the draft said it is under Chapter 7 of the UN Charter, which means it could be enforced militarily. It would authorise humanitarian access at two crossings from Turkey, one in Jordan and one from Iraq helping more than 2 million people who have not received aid. The diplomats spoke on condition of anonymity because the draft has not been made public.

All 15 council members voted for a resolution in February demanding that all sides in the Syrian conflict allow immediate access for aid. Despite the resolution, UN officials said the dire humanitarian situation has failed to change.

While the delivery of aid may be resolved, reports have revealed that nearly 2,000 civilians, more than a quarter of them children, have been killed this year in a massive Syrian air offensive on rebel-held areas of Aleppo province, a monitor said Friday.

The staggering toll from barrel bombings and other air attacks comes just ahead of Tuesday's presidential election, which is expected to return Bashar al-Assad to power for a third, seven-year term.

From the beginning of January through Thursday, air raids killed 1,963 civilians, including 567 children and 283 women, the Syrian Observatory for Human Rights said.

Control of Aleppo city, Syria's former commercial hub, has been divided since a rebel offensive in July 2012. Government aircraft have been targeting opposition-held areas there as well as nearby towns and villages.

The offensive began in mid-December, and intensified in January, with helicopters raining down barrels bombs, causing a massive exodus.

"In Aleppo, the regime's idea is to empty the city of its residents, to cause the maximum destruction possible," said Observatory director Rami Abdel Rahman, adding that hundreds of elite fighters from Lebanon's Shiite Hezbollah are participating in the regime offensive on the city.

Barrel bombs are cylindrical metal containers packed with explosives and scrap metal that are unguided and so kill indiscriminately.

The United States has denounced them as "barbaric," and rights groups have said their use could be a war crime.

In April, Human Rights Watch said: "President Assad is talking about elections, but for Aleppo's residents, the only campaign they are witnessing is a military one of barrel bombs and indiscriminate shelling."

The election will be held only in government-controlled areas inside Syria and in Syrian embassies, where voting began on Thursday.

The opposition has dismissed the vote as a "farce" and the United States calls it a "parody of democracy."

The election is seen as a tactic by Damascus to strengthen Assad's position as troops backed by Hezbollah and a growing paramilitary press offensives on rebel areas on several fronts.

Neighbouring Iran is a strong regime ally, and senior foreign policy advisor Ali Akbar Velayati said Friday the election would be "carried out without a hitch."

It will "strengthen the legitimacy of the Bashar government... as his people have realised he has prevented Syria from disintegrating or falling to occupation," he added, quoted by state news agency IRNA.

Even though rebels seized significant swathes of territory, especially in the north and northwest, the Iranian and Russian-backed regime still massively outguns them.

The vote also comes as the rebels have been weakened by infighting among rival jihadist groups.

The conflict began as a peaceful, Arab Spring-inspired movement demanding political change that descended into civil war after Assad unleashed a brutal crackdown.

At least 162,000 people have died as a direct result of the fighting and bombings, according to the Observatory, which relies on a network of activists and medics on the ground for its reports.

The European Commission says an additional "200,000 Syrians have died from chronic illnesses due to lack of access to treatment and medicines."

It also says 3.5 million are in areas that cannot be reached by aid workers.

Earlier this month, Western backers of the opposition had tried to pass a UN Security Council resolution that would have referred Syria to the International Criminal Court, but the draft was vetoed by Assad backers Russia and China.

On Friday, a group of UN rights experts said "the failure to hold those responsible for the violations to account may fuel further atrocities." 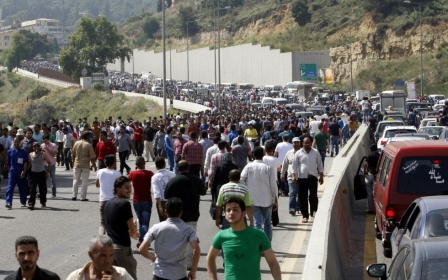