Pro-Kurdish supporters clash with police after the funeral of two protesters in Hakkari, December 2013 (AFP)
By
MEE staff

Three Turkish soldiers were killed and three others injured gunmen opened fire in the far-eastern majority Kurdish town of Hakkari, near the borders with Iraq and Iran.

The shooters are widely believed to be members of the outlawed Kurdistan Workers’ Party, the PKK, a group designated as “terrorist” by Turkey and several of its allies, including the US and the EU.

Two of the dead men were reportedly plain-clothes sergeants working with the Police Special Operations Department, while the third was a soldier also dressed in civilian clothing.

Graphic images circulating on social media show three blood-soaked bodies lying on the ground amid a large crowd of onlookers.

Eyewitnesses told Turkish news site Today’s Zaman that the men had been shot in the head from behind by two masked men.

The office of Turkey’s Chief of Staff issued a statement on Saturday afternoon saying that the PKK were responsible for the attack - the ministry never mentions the group by name, but said that "three terrorists from the separatist terrorist organisation" had carried out the shooting.

Turkish security services have now launched a “large-scale” investigation into the killing of the plain-clothes officers.

The attack comes amid heightened tension between Turkish security forces and the PKK – the two sides have been locked in conflict for decades, but in 2013 reached a historic ceasefire and began a fresh round of peace talks.

Turkey has recently seen a number of violent disturbances, with the PKK organising rallies protesting at the Turkish government’s perceived “indifference” over the fate of Kobane, the Syrian Kurdish border town besieged by militants from Islamic State.

33 people were killed on 8 October after a string of pro-Kurdish rallies in nine of Turkey’s 81 provinces saw fierce clashes between protesters and police.

The clashes included an assassination attempt on a Turkish police chief in the eastern city of Bingol.

On Tuesday, Turkish fighter planes attacked positions held by the PKK in the province of Hakkari, in the first such incident since the 2013 ceasefire.

Military officials reported that the strikes were in retaliation for armed attacks launched by PKK fighters on police stations in the province, fuelled by anger over Turkey’s role in the anti-IS fight in Syria.

On Friday, three PKK members were killed – Turkish forces said that they had attacked a power plant, while the group reported that the members died in an unprovoked ambush. 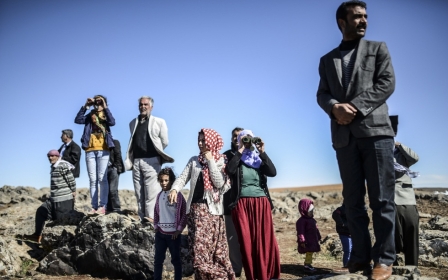