Investigation opens into 'detention' of Iranian-Americans at US border Iranian-American Negah Hekmati, speaking at news conference on Monday, said her husband and their 5-year-old daughter were stopped and held for five hours (screen shot)
By
Sheren Khalel

The Department of Homeland Security (DHS) has opened an investigation into reports that scores of Iranian-Americans were stopped and questioned at US points of entry, possibly in violation of their constitutional rights.

The investigation was opened by the DHS Office for Civil Rights and Civil Liberties on Thursday after dozens of lawmakers expressed outrage over why at least 60 Iranian-Americans (some reports have indicated between 100-200) were stopped by US Customs and Border Protection (CBP) while returning to the US on Sunday.

Middle East Eye reached out to the DHS's civil rights office for comment, but had received no response at the time of publication of this article.

News of the investigation came a day after US Senator Elizabeth Warren's office gave the CBP a one-week deadline to answer questions about the incident that happened at a border crossing between Canada and Washington.

- Negah Hekmati, an Iranian-American stopped by the CBP

Many of the people stopped were families returning from a concert in nearby Vancouver that featured an Iranian pop star.

Some of those stopped at the border told local government agencies and advocacy groups that they were held for as long as 11 hours and questioned "about their political views or religious views and practices", Warren's office said in a news release on Wednesday.

Other reports indicated that non-US citizens of Iranian descent were turned away and not allowed entry into the US despite carrying US visas.

Warren, concerned that those stopped might have been racially profiled amid recent tensions between the US and Iran, addressed her letter to CBP acting commissioner Mark Morgan, giving the agency until 14 January to respond to a list of questions to clarify the matter.

Another letter, signed by 70 members of the House of Representatives, was sent to DHS asking the agency to explain the secondary screenings, Washington Congresswoman Suzan DelBene said in a statement on Wednesday.

"It has become clear that this additional screening, holding, and questioning was solely reserved for Iranian-Americans," the letter read.

Read the letter I led with @PattyMurray to DHS demanding answers regarding the reports of detainment of Iranians & Iranian Americans in Blaine, WA over the weekend. This cannot become the norm. pic.twitter.com/ON8g0THY50

The incident on Sunday came the same day DHS issued a National Terrorism Advisory System Bulletin warning that Iran has "demonstrated the intent and capability to conduct operations in the United States", following the US killing of Iranian Major General Qassem Soleimani days earlier.

CBP has denied reports that the agency, an arm of DHS, has been targeting Iranian-Americans for extra questioning because of their backgrounds.

"Social media posts that CBP is detaining Iranian-Americans and refusing their entry into the US because of their country of origin are false. Reports that DHS/CBP has issued a related directive are also false," CBP tweeted on Sunday.

Still, Warren and other lawmakers, state officials and rights advocates were far from satisfied with the explanation.

"CBP’s statement does not address the troubling reports from individuals held at the border," Warren said in her letter.

"Nor does it address other potential reasons for holding these people at the border."

'Putting them on notice'

Washington State's Lieutenant Governor Cyrus Habib, who happens to be Iranian-American, told MEE that his office along with the office of Governor Jay Inslee has been collecting official signed statements from those stopped by CBP in case there is a need to take legal action in the future.

"We haven't gotten any clear answers from CBP or Homeland Security," Habib said.

"Those of us in state government and members of Congress know what happened and we recognise that this was a violation of the constitutional rights of US citizens to be treated equally under the law, and we're putting them on notice," Habib said.

Habib said CBP's handling of the situation was tantamount to "gaslighting" the American public.

"CBP is not admitting to what they have done and that speaks to their knowledge that what they did was not right," he said.

"The fact that they're pretty much saying 'we don't know what you're talking about' means that they know there's no legal justification for racial profiling and treating Americans differently for absolutely no reason."

Habib said he woke up Monday morning to a string of texts and emails from Iranian-Americans that had been held at the US border in Washington state, several of whom he had known for many years through his connection to the local Iranian-American community.

"This woman said that she went outside and cried so that her kids wouldn't see her. It's a really striking thing," Habib said, adding that many of the people he spoke to reported being scared and anxious while waiting for hours to have their passports returned.

"There's certain situations where you feel like you've done something wrong for even being there," Habib said.

Speaking at a news conference on Monday, Iranian-American Negah Hekmati said she, her husband and their five-year-old daughter were stopped and held for five hours overnight.

Upon entering the border crossing on their way home from a ski trip, Hekmati and her family had their passports taken and were placed in a room filled with other Iranian-Americans.

Habib said he is concerned that such incidents will lead Americans of Iranian heritage to change their normal behaviour out of fear of government persecution, despite having done nothing wrong.

"I got a text message from another Iranian-American woman and she said 'you know, I was thinking about going on vacation soon and now I don't know if we should because of all of this' - so that just shows that now Americans of Iranian backgrounds are going to factor this in," Habib said.

"A hundred cases can multiply in people's fear and imaginations into tens-of-thousands of cases when people [start] to factor that kind of thing in or alter their behaviour," he added. 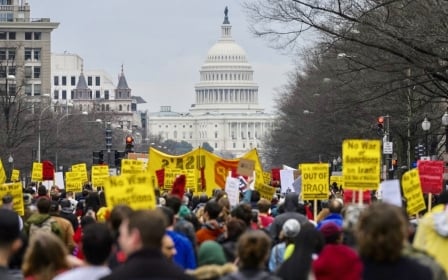