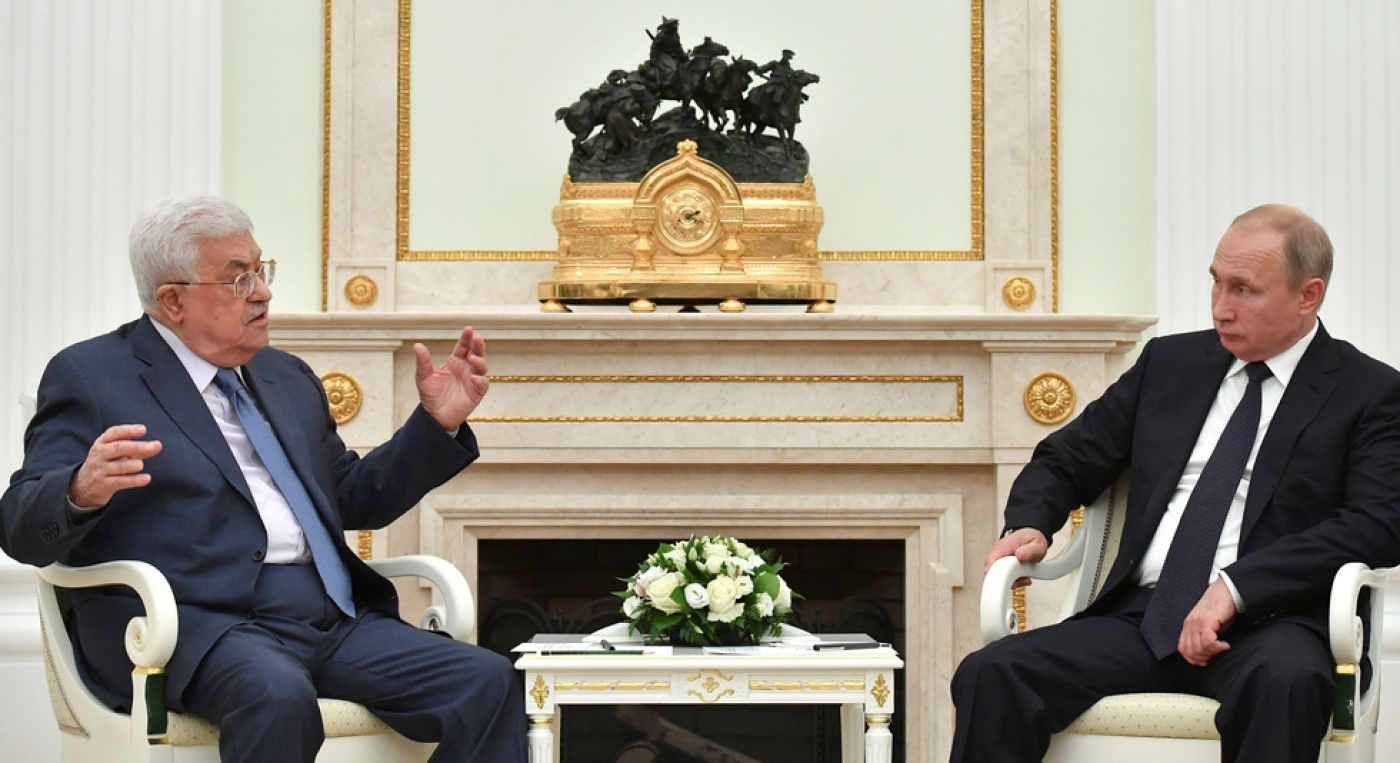 "We are grateful that you have used the World Cup as a reason to come to Moscow," Putin said (Reuters)
By
MEE and agencies

"I'm glad of the opportunity to tell you about the contact we have had with your neighbours, and leaders of various countries," Putin told him as they met at the Kremlin on Saturday, in quotes carried by Russian agencies.

"I know that the situation in the region is difficult and we are grateful that you have used the World Cup as a reason to come to Moscow," Putin said, adding that he looked forward to the opportunity to discuss the problems facing the Palestinians.

Abbas told Putin of his concerns over US President Donald Trump's move of the US embassy to Israel from Tel Aviv to Jerusalem, as well as Israeli settlement activity and Trump's "deal of the century," which has still not been officially released.

"We are resisting attempts by the Americans to impose their decisions on the most sensitive problems of Palestine," Russian news agencies quoted Abbas as saying in translated remarks.

"As you know, our relations with the US are not going through the best period in their history now. You also know that we have stopped all our contacts with the Americans.

"This is connected to the fact that they are trying to carry out the so-called deal of the century, and we think that the first step on the way to that plan was the shifting of the US embassy to Jerusalem."

Israel seized East Jerusalem from Jordan during the 1967 Six-Day War and later annexed it. The move was illegal under international law and never recognised by the international community, despite Israel declaring the city its undivided capital.

Trump's decision in December last year to move the US embassy to Jerusalem and recognise the city as the capital of Israel fulfilled a campaign promise but has dismayed Palestinians and other countries, who have denounced the move as a blow to any peace efforts.

More than 60 Palestinians were killed by Israeli forces in protests in Gaza on the day of the embassy's inauguration on 14 May.

The Palestinians see East Jerusalem as the capital of their future state under a two-state solution, although many increasingly see such a negotiated solution as unlikely to happen given Israel's increasingly right-wing politics and the Trump administration's wholehearted support of Israel.

According to Palestinian officials, under Trump's "deal of the century" they are likely to be offered provisional borders over fragments of land comprising about half the occupied territories, or just 11 percent of what was recognised as Palestine under the British mandate.

Israel and the Palestinians would then be left to "negotiate" over the status of Israel's illegal settlements in the West Bank and East Jerusalem, with Trump likely to back Netanyahu to the hilt, according to analysts.

It is widely assumed that the US has rejected any principle of a right of return for Palestinian refugees, either to Israel or to the areas of the occupied territories that Israel wins US approval to seize.

"Today our region, and Palestine, go through a difficult time," Abbas told Putin.

"And I can tell that another crisis is developing, which is related to the situation in Palestine, and first of all I mean the attempts and plans of Israel regarding the new settlements. This is what worries us very much."

Netanyahu was in Moscow on Wednesday where the situation in Syria and Palestinian relations were on the agenda of his meeting with Putin.

Israel's military renewed air strikes targeting Hamas in the Gaza Strip on Saturday a day after Israeli forces killed two Palestinians during large-scale demonstrations near the fence separating the Palestinian enclave from Israel.

More than 220 others were injured, according to the Gaza health ministry.