'Aid goes to all people in need': The inner workings of how goods reach Syria

Aid convoys from Jordan to Syria require complex logistics and a host of key players, making for strange bedfellows 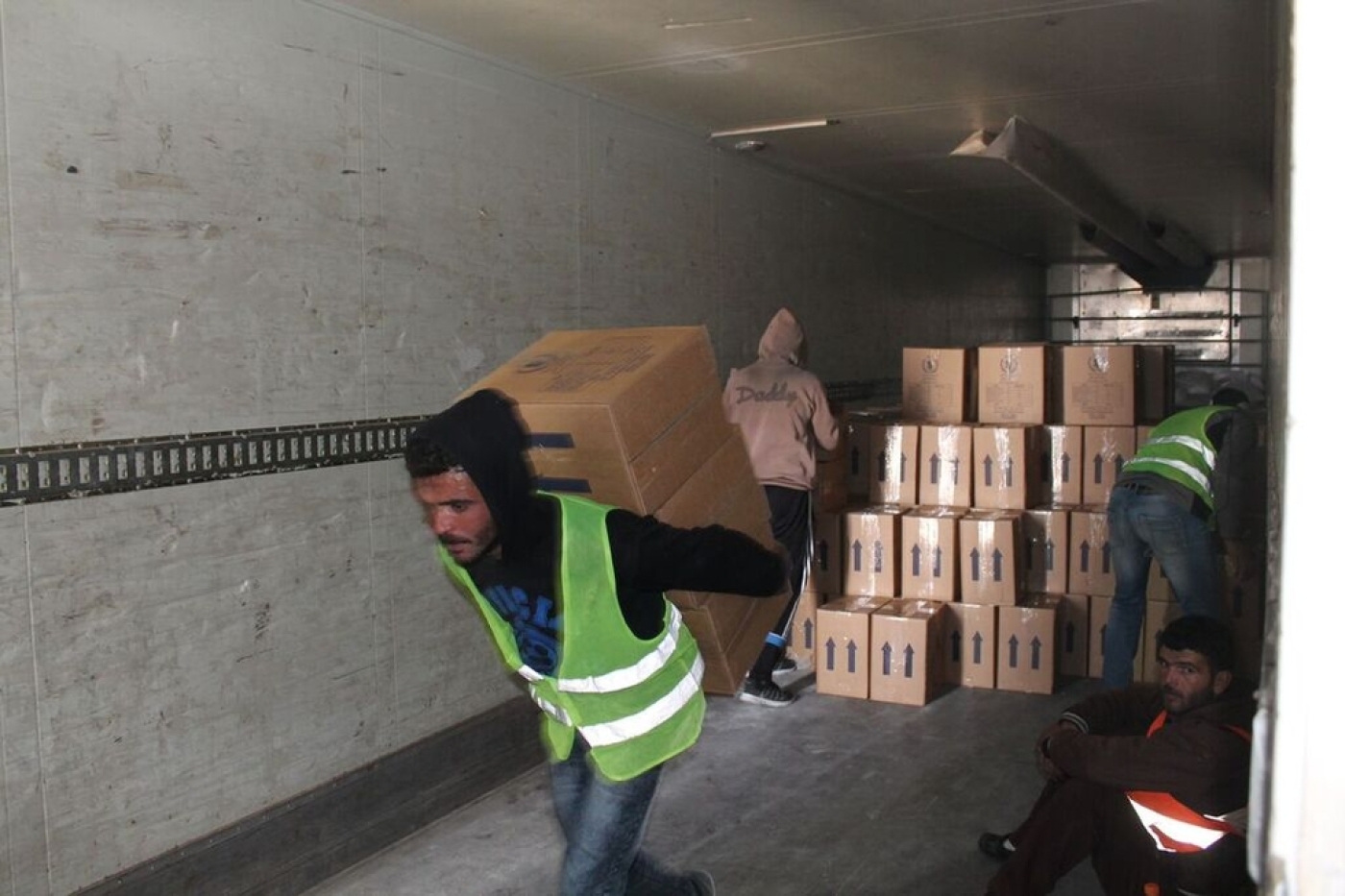 RAMTHA, Jordan - Aid convoys have quietly rolled over the Jordanian border into rebel-held southern Syria for close to 18 months – and this week, for the first time, the humanitarian agencies and security services that run the operation have granted access to the press.

Along this stretch of border, a densely populated belt of farmland, the Syrian conflict is a two-player game: Jordan’s border guards control the southern side of the border and the Free Syrian Army (FSA) rebel group controls the north. But up close, the mechanics of running an aid convoy into opposition-held territory are far more complex.

Behind every one of the 1,524 lorries that have rolled into Daraa, Syria is a Jordanian driver and a Syrian driver; the UN’s World Food Programme and its Office for the Coordination of Humanitarian Affairs (OCHA); the International Organisation for Migration; Jordanian border guards, military, customs and intelligence; the FSA – and a crucial communique from Geneva to Damascus.

It’s a complex set-up with some unlikely bedmates, but from a humanitarian perspective, it’s working. Ninety-eight convoys laden with lentils, sugar, flour, nappies, blankets, winter clothing, water treatment kits and other essentials have made their way into Daraa since August 2014, when the project began. Operating under the mandate of UN Security Council resolutions 2165, 2191 and 2258, the programme has yet to experience a single stumble: no bombs, no deaths, no hijacks, accidents or theft of goods.

The process begins when Jordanian truck operators, who drive past several checkpoints to reach a tarmac with a small hangar, handle Jordanian-plated lorries full of aid goods to Ramtha. Here, under the observation of the UN, border guards and intelligence services, Syrian drivers – refugees living in Jordan, background-checked by Jordan’s General Intelligence Directorate – position empty Syrian-plated lorries back to back with the Jordanian trucks, and the goods are transferred from one to the other. No Jordanian vehicle enters Syria.

Once the goods get transferred, the lorry is closed up and a UN official places a numbered zip-tie on the gate, sealing the load. The driver puts a numbered sign on the dashboard – his place in the convoy, one through 12 – and a UN flag is unrolled and tied to the roof: a clear indication to any planes or helicopters that this is a humanitarian vehicle. The Syrian driver then puts the lorry in position at the far end of the tarmac and the driver heads back into Ramtha for the night.

The following morning at first light, drivers return and undergo security checks, seals are checked, and if all is well, the convoy rolls north in numerical order around 7:30 AM local time.

Jordanian intelligence officials credit the FSA’s control of the border area and around 60 percent of southern Syria with ensuring the aid reaches the people who need it most.

“If the regime [Bashar al-Assad's government] was in control there, it would be far more complicated. Aid wouldn’t go to all people, just to regime supporters. As it is, aid goes to all people in need,” said an official at the border, whose name was withheld for security reasons.

“The FSA provides protection once these trucks go through, but they don’t touch the trucks, even if they are starving themselves. They facilitate safety in their area of influence and so far we haven’t faced any security concerns,” he told Middle East Eye.

It would be a mistake to read this strategic co-operation with the FSA as a sign that Jordan is throwing its full support behind the Syrian opposition, said Sean Yom, a political scientist focused on Jordan and the Hashemite dynasty.

“One of the longest-standing themes in Jordanian foreign policy is the diversification of risk by playing both sides. Jordan has to undertake with extreme caution any military or security engagement over the border," he told Middle East Eye.

"It may be standing shoulder to shoulder with the FSA for basic humanitarian stuff, but there is also a good chunk of the Jordanian security establishment that is looking ahead to the day Assad declares the war over and says, ‘and we remember what you did’."

Once the convoy reaches its destination, goods are offloaded and passed to the next link in the chain: Syrian humanitarian groups.

“All aid is given to local NGOs,” said OCHA’s Haya Alayed. “The aid doesn’t go to military groups. The convoy goes to planned drop-off locations and it is given to our partners on the ground who distribute it to people in need afterwards.”

According to Jordanian intelligence, the most fraught moment in the process is when the empty lorries enter the gates on the Syrian side of the border complex. Police, army and sniffer dogs – detecting explosives and drugs – are deployed, and lorries roll through the gamma-ray scanner, which compares an “after” scan to a “before” scan taken before the lorry was loaded. Drivers undergo a physical check and a security debrief at the end of the day.

On the day MEE visited, nearly three weeks into the cessation of hostilities, Ramtha was perfectly calm – just wind, birdsong and the call and response of soldiers out for a run. It made for a break, UN staff said, from the regular sounds of shelling and explosions. During the most intense Russian bombardments over the winter months, staff said they could see Russian planes finishing bombing runs and looping around at the border, which is less than three km away from the complex where the convoy is prepared.

The proximity of Syria’s war was hard to fathom on a quiet spring day. But its affects are on show everywhere you look. Before the conflict began, Ramtha was boisterous with taxis, business travellers, mini-buses loaded with workers and family cars piled with children. These days, the crossing is a ghost town. Sun-faded shops and abandoned rest areas for long-gone travellers sit empty, their signboards a garish reminder of a time long gone by.

The border between the two countries is now a military zone. The large groups of refugees that walked south over Syrian farmland seeking refuge in Jordan stopped coming in 2013, when Jordanian authorities began to clamp down on refugee traffic. Many of the families of the Houran Plain, the stretch of land sliced in two by the Syrian-Jordan border, are now themselves divided in two. Ramtha is restricted to military, intelligence and humanitarian access, and many of the families that once passed through here on weekend trips now depend on the aid that rolls north, three times per week.

The number of people in need in southern Syria – in both Daraa and Quneitra provinces – has spiked since the Russian military intervention in September 2015. OCHA estimates that at least 70,000 people have fled their homes in southern Syria, many not for the first time. But border guards at Ramtha said they thought the figure was higher: upwards of 100,000 at least.

On Thursday, MEE reached out to several Syrian humanitarians working with groups that receive UN aid and distribute it locally. They estimated that 41,000 families relied on UN aid in the western part of Daraa province, and 43,000 families in the eastern part. They said average family size was five people, and not enough aid was being supplied to meet the demand.

The UN isn’t the only aid provider, they noted. Additional supplies arrive from the Qatar Red Crescent, a handful of charities, and the Saudi and Emirati governments - both of which support various opposition groups actively fighting against Assad. In Syria, even nappies and lentils are politicised.

The polarised context makes operating under the auspices of neutrality doubly challenging for the UN. Officials rely both on Syrian rebels, to ensure aid reaches people in need, and on the Syrian government, to facilitate safe passage by giving the convoy a wide berth from any airdropped ordnance. The note issued to Damascus by the UN clearly states the date, delivery location and lorry contents.

“We hold them responsible not to attack our trucks,” said Alayed.

Thus far, neither Damascus nor its foes have. But in a conflict as polarised as this one, even assurances that aid will reach its destination in-country don’t deliver the ultimate guarantee - that aid will reach all those in need, regardless of which flag they are living under. 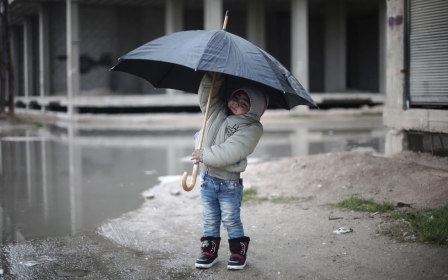 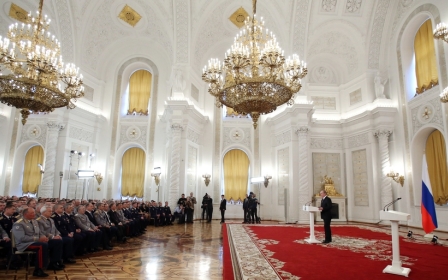 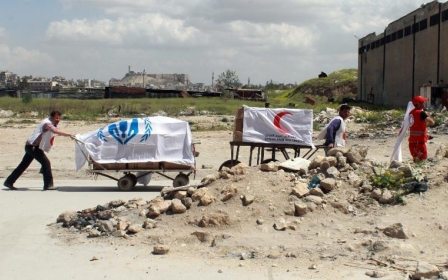