JERUSALEM: For the second time in less than a fortnight, the tramlines of East Jerusalem were littered with debris and injured people on Wednesday, as the city's regular trains were halted and crowds of onlookers and officials flooded the troubling scene.

The chaos followed on from an attack carried out earlier in the day at a busy intersection in Sheikh Jarrah, where Palestinian and Orthodox Jewish neighbourhoods sit side-by-side with luxury hotels.

The incident saw a van plough into a crowd of pedestrians waiting at a bus stop, sending people running over the tramlines as the van charged on for some 300 metres, finally coming to a halt at a traffic light where cars were waiting to pass.

The driver of the van, identified as Ibrahim Al-Akri, 38, from Shuafat refugee camp on the outskirts of East Jerusalem, was swiftly shot dead at the scene as he tried to run from his vehicle. According to some witnesses, he attempted to strike passers-by with a metal bar as he attempted to flee.

As officials, paramedics and onlookers rushed to the site, Akri’s half covered body could be seen on the tracks, lying just meters away from the injured.

Thirteen people were injured and rushed to neighbouring hospitals. By the afternoon, 38 year-old border policeman, Jidan Assad, from the Druze community of Beit Jaan, had been pronounced dead from his injuries sustained in the attack. Two other civilians remain in critical condition in hospital.

“I saw the white car crash and heard the shooting,” a female eyewitness at the scene, who was waiting at traffic lights next to the site of the attack and did not want to give her name, told Middle East Eye. “The car hit some people in the station up the hill, then continued further up and across the tramlines. I saw the body on the tramlines, but didn’t see him leaving his car.”

“A lot of soldiers and police were around, and many people just observing. The whole area was closed off. Afterwards, a lot of police came on horses and started to go after and beat the Palestinians who had arrived to see what had happened, and everyone ran back. It was very humiliating.”

Traffic in the Sheikh Jarrar area was at a virtual standstill until mid-afternoon and several hours after the fatal crash the tramlines remained closed. Men, women and children from the local Orthodox community gathered at the site of the attack to survey the damage, congregating in small, anxious groups. Many expressed relief that they could easily have been caught by the vehicle; American students at religious colleges nearby, they frequently use this stretch of road and the trams that run along it.

“Again, and again and again, again a terrorist attack. It’s not even a shock anymore. These things happen once every two weeks, every three weeks,” Dov Green, a 20 year-old who has been studying in Jerusalem for two years, told MEE.

“The community is very angry, and is also very angry with the government which doesn’t do enough. What happened just happened two weeks ago, even in the same area. The government should be more strict, I mean, I don’t know what they should do. I would say they should take more radical action in the radical areas, which include Silwan, and Shuafat where I am from. They should send them to Gaza or to Jordan, somewhere out of Israel, they shouldn’t be able to just take a car and attack.”

The attack comes two weeks after another Palestinian man Abd al-Rahman Shaloudi, 21, a Palestinian from Silwan in East Jerusalem, who had served three jail sentences for "security offences," including stone throwing, drove his car into a crowd of bystanders also waiting alongside the tramlines.

It also comes exactly one week after a far-right Israeli activist, Yehuda Glick, was shot and seriously wounded by a masked gunman. The main suspect in the shooting, Muataz Hijazi, was then shot dead by Israeli security services. Several eyewitnesses contest that he was not armed at the time.

Following Akri’s killing, media reports identified him as a father of five, and the brother of former prisoner, Mousa al-Akari, who was released and exiled to Turkey in the 2011 Gilad Shalit prisoner swap. According to Israeli reports, Mousa had been sentenced to life imprisonment as a member of the group that killed Israeli soldier, Nissim Toledano in 1992.

Hamas’s spokesperson hailed the attacks in a statement issued today, although do not appear to have directly taken credit for it.

As the ambulance crews left, more crowds began to gather at the scene. Some held the remains of a bicycle they said a 15 year-old had been riding at the time of the accident. The teenager, they said, had been critically injured and remained in hospital. Many of the Israelis who had gathered demanded a stronger reaction from authorities.

“We’re really happy that the cops killed him because if they wouldn’t have killed him then after a few months or years they would have made a deal with the terrorists and released him,” said Shalom Tsuker, 33, who immigrated to Israel from New York. “Justice would’ve never happened.”

Israeli intelligence agencies have announced that they will release the body back to the family late on Wednesday but the funeral will be tightly controlled with only 35 mourners reportedly allowed to attend.

In shops a short walk away from the scene, local Palestinians were anxious and uneasy. "We don't care about Christian, Muslim, Jewish, we just want peace," one man, who did not wish to be named, said.

Today's events come amidst a time of growing tensions in Jerusalem, which have seen police enact a widespread crackdown. Nearly 150 Palestinians have been arrested in the last two weeks, according to police figures, while clashes with Israeli authorities have been happening on an almost nightly basis.

Al-Aqsa mosque, is seen to be at the heart of the much of the unrest. This morning, the mosque shut its doors to visitors for the second time in less than a week. While men over the age of 50 were permitted to pray there at dawn, access was then restricted to allow a group of right-wing Israelis to enter the compound.

Settlers escorted by armed soldiers prayed in the compound, further provoking Palestinian fears of creeping Israeli control over the mosque, which is the third holiest site in Islam but known as the Temple Mount to Jews, who believe it to be the site of two former temples.

Outside the closed-off gates, Palestinians clashes with police, who barred their entry to the mosque.

Knesset member, Haneen Zoabi, a Palestinian citizen of Israel who was present at al-Aqsa this morning, said that she and other Palestinians were prevented from entering the mosque until 9:30 am local time (0700 GMT).

By the time the police allowed people to enter, the scene was one of chaos and destruction, she explained.

“I’ve been there several times when there were confrontations, but never saw it as it was today,” she said. “It was the scene of a war, and it was inside the mosque. We were told soldiers usually enter just two metres in, but this time they came to the middle of the mosque. We saw hundreds of bullets and a lot of smoke.”

Palestinian Red Crescent official Amin Abu Ghazeleh reported that nine injured Palestinians were taken to hospital, according to Palestinian news agency, Ma’an. Tear gas inhalation and wounds from rubber bullets and sound grenades were all among the injuries.

Zoabi stressed that heightening Israeli violence across all of East Jerusalem and the gradual change to the status quo at al-Aqsa – which has seen growing restrictions on Palestinians, but more liberal rules for right-wing Jews who wish to pray at the site – have been fuelling unrest and anger among Palestinians in the city.

“There’s a well-known context of very deep oppression and very deep violence,” she said. “Settlements and violence toward the mosque are not new, but they are escalating the aggression. And there is, too, the neglect and oppression of the young generation, between 15 and 25, who have no educational opportunities, no work opportunities.

“It raises the level of anger among Palestinians in East Jerusalem, and what allows this is the policy of disconnecting Jerusalem. [Israeli authorities] have succeeded in turning Jerusalem into a siege, by building the wall. And they are confident that this will not lead to a third Intifada, because you need the West Bank to be part of it,” Zoabi added.

Compared to the battles of Jerusalem, the West Bank has so far remained relatively quiet over the last few weeks. But as Akri was set to be buried close to the walls of the Old City signs emerged that the unrest could be spilling over.

At around 23:00 local time (2100 GMT) Israeli media reported a “large commercial vehicle with Palestinian plates” was driven into a junction in the Gush Etzion cluster of settlements south of Jerusalem in the occupied West Bank.

Three soldiers have suffered “moderate-to-severe” injuries, according to Ynet News. Israeli forces have begun scouring the area for the assailants who allegedly fled toward Hebron following the attack.

Barricades have now sprung up to try and catch the suspects, who drove into the army post near a Palestinian refugee camp close to the group of settlements. In neighbourhoods of East Jerusalem, including the Shuafat refugee camp that was Akri's home, clashes between Israeli forces and Palestinian youths also continued into the night. 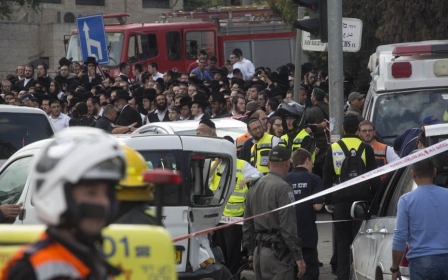