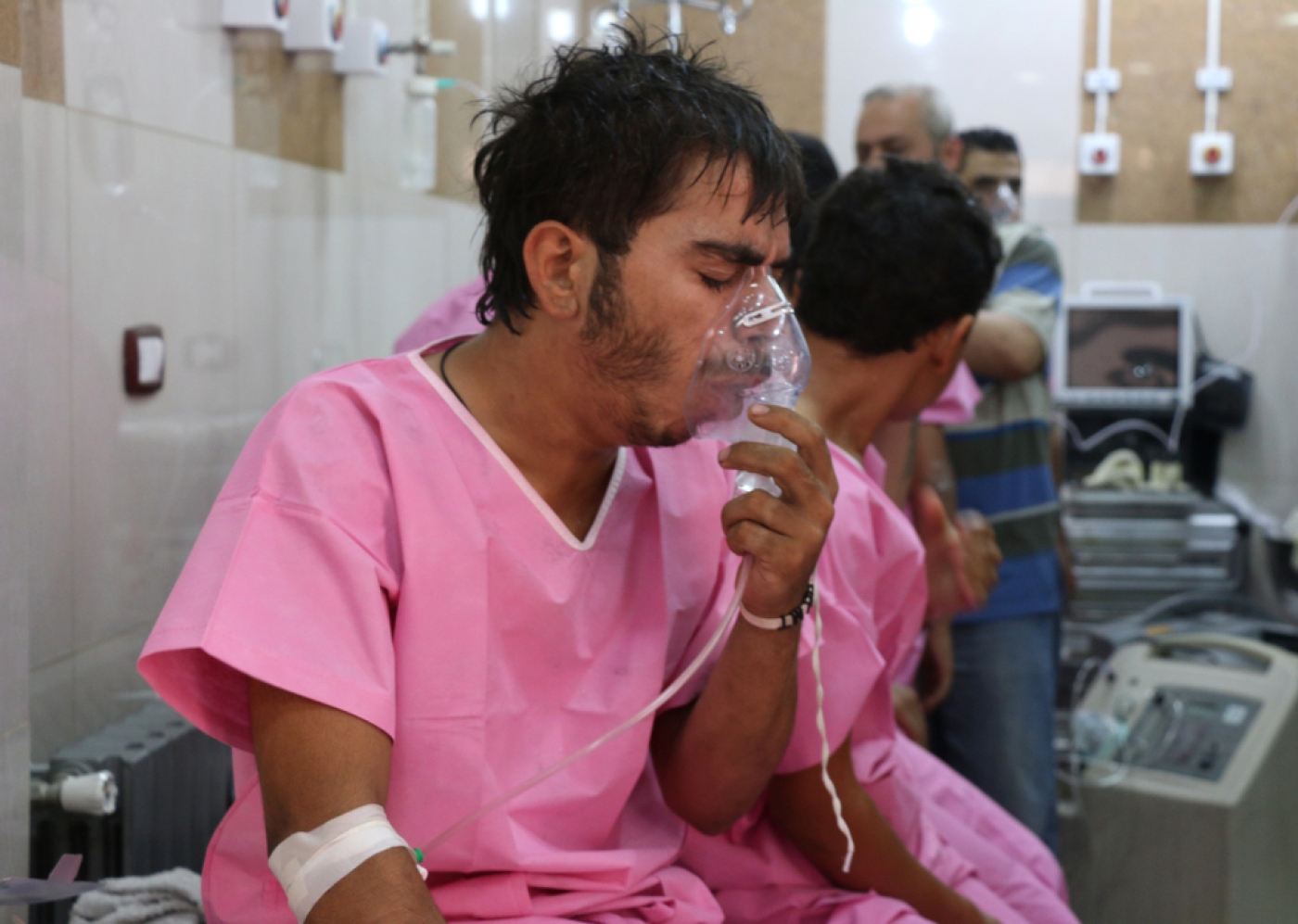 Eyewitnesses on the ground reported that the suspected chemical attack came from a missile fired by a Syrian government jet.

Images of civilians running from the bomb site and struggling to breathe filled social media, as activists claimed a chlorine attack had taken place.

Survivors told Middle East Eye that many people were suffocating and had to put gas masks on to breathe.

“Me and my children were all coughing and struggling to breathe after the attack took place,” said Mariam Khawaja, a 32-year-old mother from Aleppo. “My throat was burning and my eyes were tearing; all I could think about was my children.”

She added that since the siege, her area has constantly been targeted by warplanes and helicopters, which has prevented her family from fleeing.

“There were many civilian casualties from the attack that [came] from a jet," said Shimale, who was reporting from the scene.

Shimale said that after the attack, he took his t-shirt off and doused it in water to cover his mouth and nose as he fled the scene.

He also told MEE that government jets flew over rebel-held areas as civilians were being dug out of the rubble following the initial attack.

“I didn’t see the smoke from the chemical attack as it was too dark, but I did feel my chest becoming heavy and tighten,” Yusrn said.

“My family and I kept moving to stay safe and we ended up on a roof where government jets were flying overhead,” he added.

During the attack, many civilians in the surrounding area fell to the ground as a result of the force of the missile blast, Shimale said.

He said more than 120 people were taken to local hospitals, with one death confirmed.

There have been numerous reports of suspected Syrian government chemical attacks against rebel-held areas.

The Syrian government disposed of a large portion of its chemical weapons stockpile following a deal brokered by Russia.

Chlorine, however, was exempt from the deal, since it is used for other purposes, like water purification.

Rebels made significant gains against the Syrian government last month, after they broke a government-imposed siege that was blocking supplies to rebel-held parts of Aleppo.

But the government renewed its siege of the city last weekend, after taking back key supply routes .

MEE reported on Monday that Syrian civilians living in rebel-held areas had begun stockpiling food in preparation for such a siege.

Last month France attempted to pass a UN Security council resolution condemning the Syrian government for its use of chemical weapons, but the move was blocked by Russia.

A UN report published in late August concluded that the Syrian government and the Islamic State (IS) Group had used chemical weapons.

The report blamed the Syrian government for using chlorine on two separate occasions.

Staffan de Mistura, the UN envoy for Syria, last month called for a 48-hour humanitarian aid corridor after the rebels began their escalation against the Syrian government.

De Mistura had been sparring with Russian diplomats at the UN and other members of the UN Security Council, calling on them to help facilitate the corridor.

Hopes had been running high for a peace agreement between the US and Russia after leaders from both countries met on the sidelines of the G20 summit to discuss the war on Monday.

However, the parties failed to reach a deal even though their representatives had spent weeks in negotiations prior to the summit.