The siege has severed the main credit line into Aleppo, closing down businesses and putting further pressure on residents and NGOs ALEPPO, Syria – At first glance, Khalid al-Jabre’s office in rebel-held east Aleppo is not that dissimilar from any ordinary bank. The large, lofty space is manned by five clerks sitting at five neat desks separated by frosted glass. The men work in 10-hour shifts and every day help around 100 customers send, receive and exchange money.

Inside there is order and efficiency, but this is little more than a facade.

Jabre, a long-time Aleppo resident, worked as an assistant in the Central Bank of Aleppo for almost a decade before the war broke out in 2011.

As the bombs began to fall, the banks started to close. Soon money started to run out and people found they could no longer buy basic food or medical supplies, but the 52-year-old father of three came up with a plan. Along with a few other friends who also had connections in banking he pooled what savings they had and reached out to former colleagues in Turkey and elsewhere in the region to put up the rest of the cash.

With wire transfers out, the city’s new self-anointed bankers went back to basics and hired teams of money runners who physically carried cash to and from the city for a fee.

They paid off local rebel groups and smugglers to help them make the 100-kilometre journey north to Turkey where the money would be exchanged for dollars then the money brought back to Aleppo. Here, tens of thousands of US dollars, as well as Syrian pounds, would be kept under lock and key and guarded day and night by a man with a Kalashnikov.

The run to Turkey was dangerous, but largely effective and more than 30 money exchange offices sprung up across the city, with 15 specifically focusing on getting cash in and out and also sending it to other parts of Syria, including those under government control.

For years this network allowed families, friends, companies and NGOs to keep sending money to people inside the city, be it loved ones or employees. The stream of funds in turn allowed the local economy to keep functioning despite the bombing and economic devastation.

But even this critical lifeline has now been largely severed in recent months as the government has intensified its bombing campaign and partially besieged the rebel-held parts of the city. The recent ceasefire did not last long enough to bring relief.

Few now dare to make the crossing and those that do charge such a premium that customers say that a 30 percent charge is applied on all transactions and services, something that the war-weary people of Aleppo simply cannot afford to pay.

“We have had to raise prices to keep functioning,” Jabre told Middle East Eye. “We have not done this because of greed or a love of money but because we feel we have to keep providing some kind of service no matter how bad things get and this is the only way we can manage it.”

Khalid Qair used to do the money runs up to Turkey frequently through a contact working at the Baba al-Salam crossing into Turkey. He says he had to work closely with some of the biggest smugglers and also pay off opposition groups like the Free Syrian Army but that he always managed to get home safely.

That all changed when the siege was enforced back in July. Qair braved one journey a month ago but says the fighting was so heavy and that he barely made it back alive.

“There was bombing and shelling every hour or so,” he said. “I barely survived two air strikes that came very close to me and I could easily have been killed.” Qair says no amount of money will lead him to try the run again unless there is a serious lull in fighting.

Even on the rare occasions when money runners make it through, office managers say they cannot keep operating as before. Jabre says he often has to close his store down out of fear it will be targeted by government bombing which has increasingly taken aim at any building where groups of people gather.

“We work in a war zone and our workers know they are always in dangerous situations,” Jabre said. “They could be harassed by armed groups, although this has not happened, or killed by bombing, but when you have so many civilians in one place it gets really dangerous. If something were to happen it would be a total tragedy.”

The inability to get cash in has had a further knock on effect.

Most of those using the system are NGOs workers, or those working in education, healthcare or relief work who are being subsidised from abroad and tend to receive monthly cash deliveries. For years, their salaries have trickled down to the rest of the community and helped keep it afloat.

Abd Khalid works for Kesh-Malek, a Turkish NGO focusing on health and education in Syria, which has long been sending money to Syria to support local schools and teachers.

“We support schools in a general way helping them to get what is needed, be it stationary or teachers’ pay,” he said. “We need to send up to $15,000 a month to support seven schools and were hoping to increase our funding in the future.”

But with the transfer commission hikes, this good work has come under threat although Khalid insists that “in the end we don’t have a choice”.

“We will just have to keep paying higher fees to be able to send anything to Aleppo,” Khalid said, adding that this meant less money was reaching civilians in desperate need.

The cash shortage has also forced many businesses to close.

Mohammad Sallah works in a mobile market in Aleppo and relies on cash transfers to and from Turkey to buy stock.

Since the siege, however, he says that pretty much everything he makes would be spent just to pay the transfer free.

“I’ve had to stop working as a result. I simply couldn’t operate my business in this way and I was losing money every day,” he said.

“Before the siege it was all good smooth process but it has become so complicated and now costs a fortune to send or receive. I simply can’t handle it and there is no point for me to go to work.”

Sallah has many relatives living in Turkey who cannot work and used to rely on his shop for financial support. He says he is not sure what they will do now that their only stable source of income has run dry.

Somaia Jaboli, a 29-year-old widow with four sons, is just one of the thousands of people affected. Since her husband was killed in an air strike three years ago she has been relying on money sent by her brother in Damascus, as well as handouts from the local council and several small NGOS.

“We can’t leave because of security reasons and we do not have enough money. I was trying to save a little every month but after the siege of Aleppo it became very difficult to get any money, especially from regime-held areas,” she said. “I’ve had to borrow money from friends just to survive but food prices in Aleppo are so high that everyone is really struggling.” 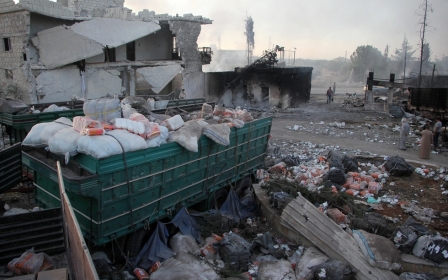