Idir, whose music was cherished by millions for elevating the voice of the Kabyle region, passed away on Saturday at the age of 70 Tributes have been pouring in for renowned Algerian Amazigh singer, Idir, described as the “godfather” of Kabyle music, who passed away in Paris at the age of 70.

Also known by the derogatory term Berber, Amazigh are descendants of the pre-Arab inhabitants of North Africa and constitute one-fourth of the population of Algeria, many of whom live in the Kabyle region.

The Amazigh community in Algeria has often been at odds with the government, amid a deep sense of cultural and political marginalisation and disputes over land, jobs and housing.

Expressing his condolences on Twitter, Algerian President Abdelmadjid Tebboune described his "immense sadness” at the news of the death of “an icon of Algerian art".

Translation: We regret to announce the death of our father (to all), Idir on Saturday May at 9:30pm. Rest in peace dad."

Algerians and non-Algerians alike took to social media to mourn the loss of a figure largely considered the ambassador of Amazigh culture and an important advocate and voice for the Amazigh cultural cause.

Idir, whose name means "he who lives" in Tamazight, the Amazigh language, had been hospitalised on Friday after contracting pulmonary disease. He will be buried in Paris where he lived.

It’s comforting to see this intérest in the Berber culture following Idir’s death. He served his case while alive but also with his legacy.#Algeria-n and North African indigenous culture and heritage should be carried with pride. This region has a rich history!

Born in Ait Lahcene, near Tizi-Ouzou in 1949, Idir, whose real name was Hamid Cheriet, initially set out to become a geologist.

However, an appearance on Radio Alger in 1973 would kick start his career and propel him into international fame, with his rendition of the traditional and beloved "A Vava Inouva" - an ode to the rich oral traditions of Kabyle mountain villages.

Unbeknownst to the fame awaiting him, Idir would have to see his military service through before beginning his career.

Shortly after, he moved to Paris to produce his first album, also entitled A Vava Inouva, but then chose to go on a hiatus, relaunching his career ten years later.

"I arrived at the right time, with the right songs," Idir later told AFP in 2013.

Whilst ensuring his Amazigh identity was a central component to his songs, Idir enjoyed cross-cultural collaborations, singing alongside musicians such as Manu Chao, Maxime Le Forestier or Gnawa Diffusion.

A revered figure in France with a cherished voice, in 2007 Idir released his album The France of Colours, celebrating France’s diverse citizens amidst a French presidential election marked by debates on immigration and identity.

Throughout his career, the musician campaigned for greater recognition of the cultural identity of the Kabyle region and in 2018, after a 38-year absence, he returned to Algeria to perform during the Amazigh New Year festivities, a year following its officiation into a national holiday by then-President Abdelaziz Bouteflika.

Godfather of amazigh culture is gone
What a lost !
The artist, the legend, the greatest
Rest In Peace
#Idir pic.twitter.com/hvdVmKs0OC

In 2017, in an interview with French newspaper Le Parisien, Idir highlighted how he used his music to elevate Amazigh culture.

“The Algerian government advocated the sovereignty of the people, but prevented me from communicating in my language. I quickly understood that a speech wore out but that a good song could remain.”

His songs were often adopted as social justice anthems for Amazigh and non-Amazigh alike in Algeria. When anti-government protests erupted last year against the ailing Bouteflika, who sought a fifth term in office, Idir was vocal in his support of the protesting masses.

Since A Vava Inouva’s release in 1976, Algerians still sing his lullaby, an emblem of Berber identity, a sign of the rich heritage of Kabyle culture that extends far beyond N Africa pic.twitter.com/5XQrlyX66j

Speaking in an interview two months after nationwide protests engulfed Algeria, Idir described the 22 February movement as a “breath of oxygen”.

“I loved everything about these events: the intelligence of the youth, their humour, their determination to remain peaceful… If we stay united, nothing and no one can defeat us,” he said at the time.

Idir’s name now joins the list of Amazigh poets and musicians who will be remembered for their services to the cultural cause, including revered singer Matoub Lounes, who was assassinated in 1998 in unknown circumstances, provoking riots with the chant “government, assassins”, used 22 years later during anti-corruption protests.

Around 30 percent of the Algerian population speaks Tamazight, however it was only recognised as one of Algeria's official languages after constitutional amendments in 2016.

Over the years tensions between Algeria's indigenous population and government measures have often boiled over, most notably the “Berber spring” of 1980 and the riots of the “Black Spring” of 2001.

Over the last year, dozens of protesters were detained for carrying the Amazigh flag during protests after former military chief, Ahmed Gaid Saleh, criminalised the use of any flag other than the national one as the basis of sowing divisions in the country, renewing fears of escalated repression targetting the Amazigh identity. 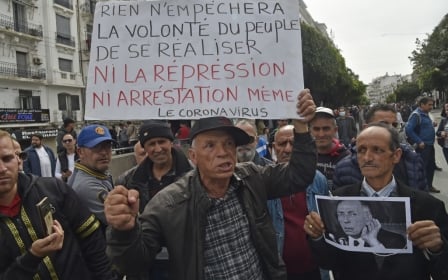