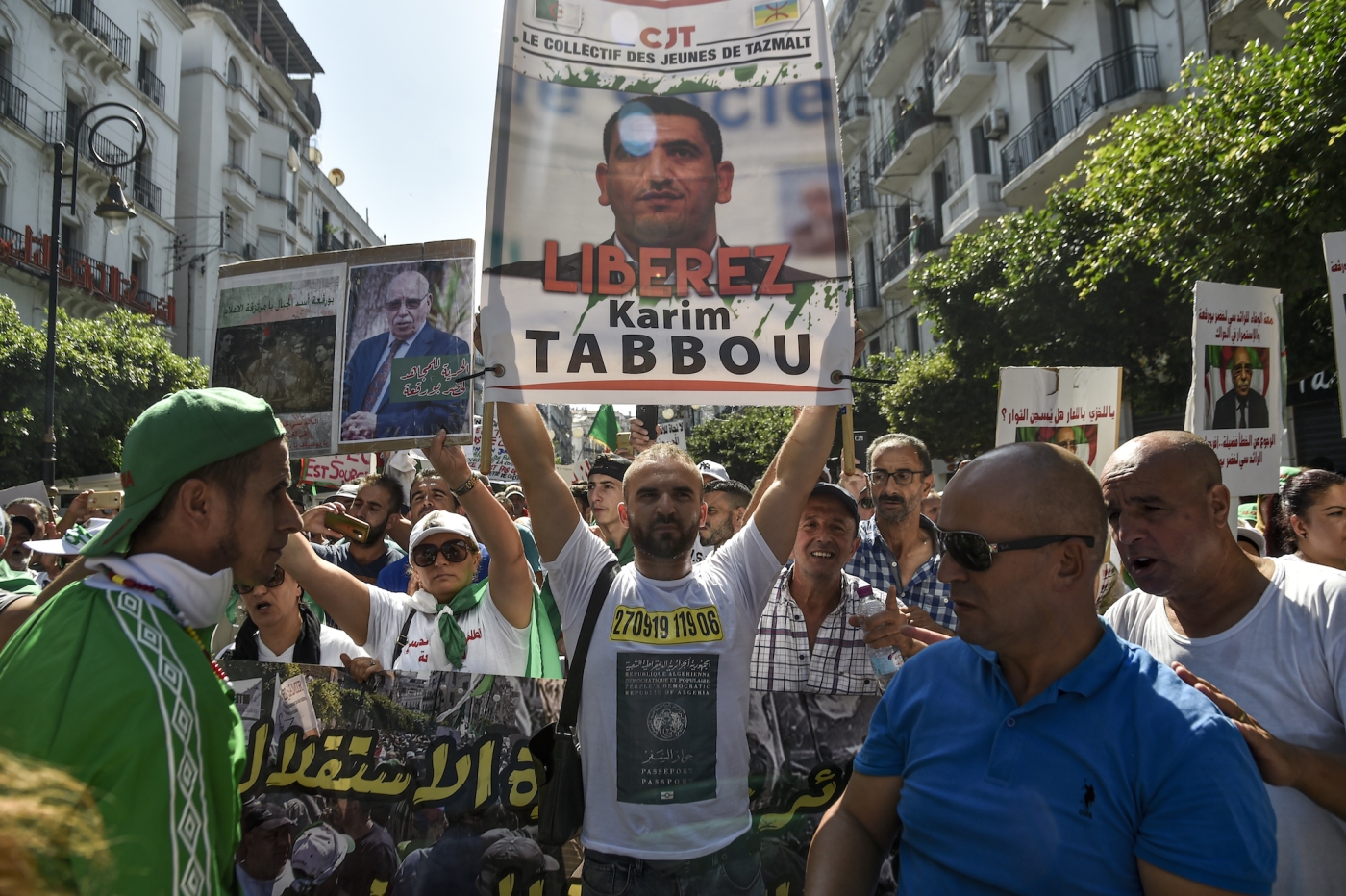 An Algerian protester holds up a sign calling for the release of Karim Tabbou, a Hirak movement leader, on 27 September 2019 (AFP)
By
MEE and agencies

Algerian President Abdelmadjid Tebboune has promised to facilitate the release of two main figures of the Hirak protest movement, the leader of an opposition party said on Tuesday.

Soufiane Djilali, head of the Jil Jadid party, said he requested a meeting with Tebboune to discuss the cases of Karim Tabbou and Samir Benlarbi and the pair could soon be released.

"President Abdelmadjid Tebboune assured me that he would use his constitutional prerogative to ensure that Karim Tabbou and Samir Benlarbi regain their freedom… It's solemn commitment on his part," Djilali told AFP news agency. 'It’s a cliche of a cliche': Algerians react to French documentary on Hirak movement
Read More »

"Mr Tebboune pointed out that he will not interfere directly in what concerns the judiciary," he added.

Djilali also tweeted that Jil Jadid was "happy" with the official commitment from the president.

In the Algerian judicial system, the president has the right to pardon prisoners.

In principle, that right applies only to those whose convictions are final, such as Tabbou, a veteran opposition figure serving a one-year term for "inciting violence" and "harming national unity".

As for Benlarbi, he has been held in preventive detention since March 7.

"I think they have paid enough. It's very good for them to regain their freedom and go back home," Djilali said.

The Hirak movement was ignited on 22 February 2019 after nationwide protests erupted against the decision by then-president Abdelaziz Bouteflika to seek a fifth term in office despite his debilitating state.

After causing Bouteflika's downfall last April and up until the outbreak of coronavirus in March, Algerians were taking to the streets weekly, demanding an end to corruption and an overhaul of Algeria's governance system, which has been in place since independence from France in 1962.

Rights groups have accused Algerian authorities of continuing to target opponents and curtail free speech while public attention was focused on the pandemic.

Last month Algeria sentenced three opposition activists to jail over Facebook posts, according to human rights groups, who described the move as the latest sign of increased repression after a coronavirus lockdown stifled popular protests.

According to the National Committee for the Release of Detainees (CNLD), some 60 people are currently detained on charges linked to the protest movement.

Amnesty has urged authorities to end "arbitrary prosecutions aimed at silencing Hirak activists and journalists" during the pandemic, and called for the release of detainees.

The rights group said that authorities were endangering detainees' health, "given the risks of a Covid-19 outbreak in prisons and places of detention".