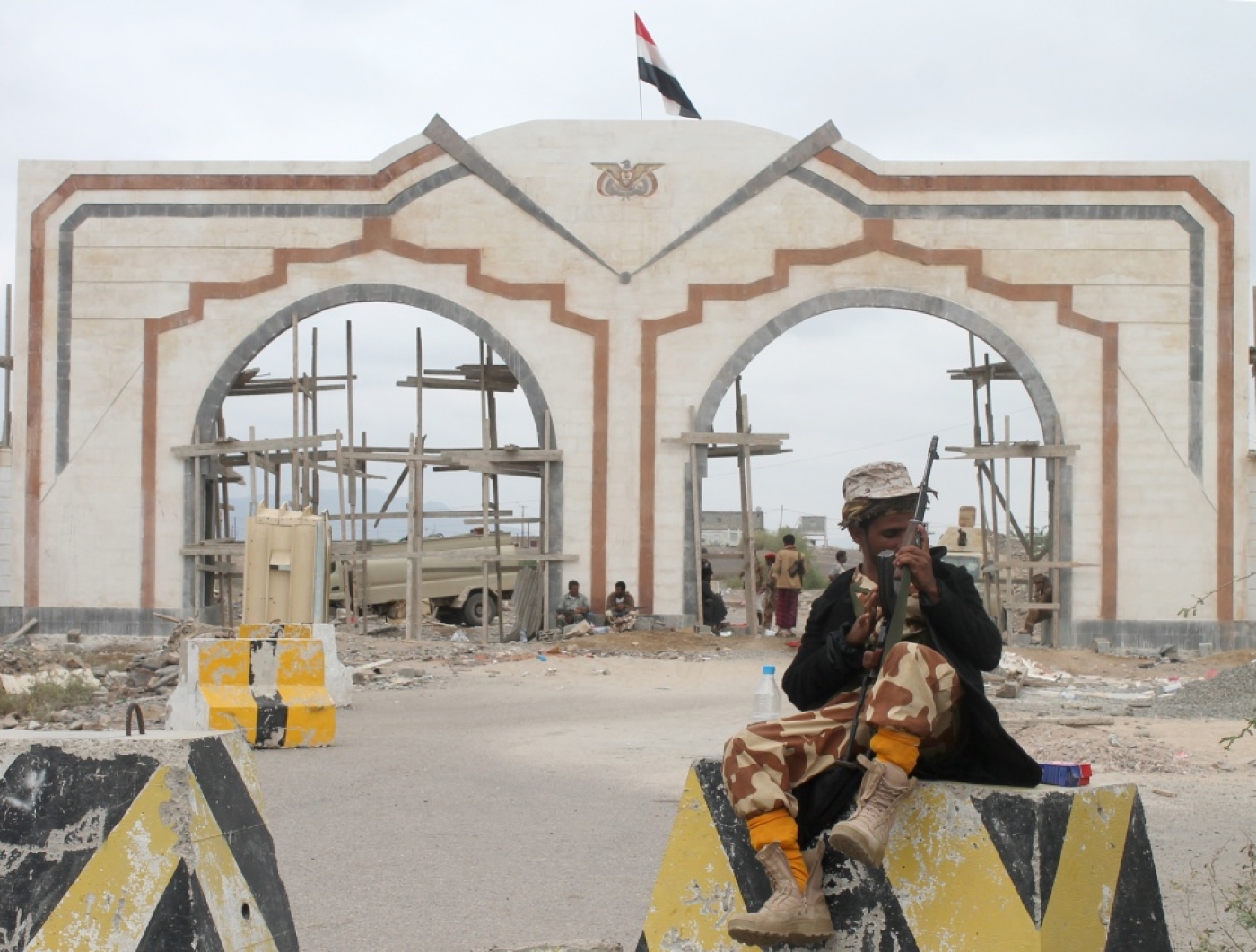 A member of a coalition of anti-Houthi fighters in Yemen's Lahj on 24 March, 2015 (AFP)
By
MEE and agencies

"Violent clashes between the Houthis and armed tribesmen ended with the former taking control of Shabwah's Baihan region," one source told the Anadolu Agency, requesting anonymity.

According to the sources, Baihan is the first region in the Shabwah province to fall under Houthi control, while Shaqra is the second region in Abyan – after Lawdar – to fall to the Shiite militants.

Five civilians were killed and several others injured on Friday when forces loyal to Saleh shelled residential districts in the southern city of Al-Houta, local medical sources have said.

"Five civilians were killed by shelling that targeted homes in Al-Houta [Lahj province's largest city] and wounded several others who have since been taken to hospital," medical sources told AA.

According to eyewitnesses, several districts of Al-Houta came under intense artillery fire by pro-Saleh forces.

Witnesses say the bombardment began after 21 Shiite Houthi militants were killed in an ambush by anti-Houthi gunmen in Lahj's Al-Wahat district.

Forces loyal to Saleh on Friday also shelled a residential district in the southern city of Ad Dali, leaving a number of dead and wounded, eyewitnesses have said.

The shelling targeted several residential neighbourhoods in both the northern and southern regions of the city, eyewitnesses told AA.

Medical sources told AA that the shelling had led to "an indeterminate number of casualties," which had since been transferred to nearby hospitals for treatment.

Residents of Ad Dali's southern Al-Aslaf district told AA that the shelling had destroyed an entire home, the injured inhabitants of which had been transferred to a hospital in critical condition.

Meanwhile, residents of Ad Dali's northern Al-Wabh district told AA that the shelling had left two people dead and several wounded, one of whom was in critical condition.

Ad Dali residents have embarked on a mass departure from their homes due to intense shelling, amid fears of continued bombardment.

A months-long rebellion by Shiite fighters has escalated into a regional conflict that threatens to tear apart the impoverished state at the southern tip of the Arabian Peninsula.

Saudi Arabia has vowed to do "whatever it takes" to prevent Hadi's fall, accusing Shiite Iran of "aggression" and backing the Houthi rebels' power grab.

At least 39 civilians have been killed in Saudi-led Operation Decisive Storm against the Houthis and their allies, officials at the rebel-controlled health ministry in Sanaa said.

At least 21 militiamen were killed on Friday when tribesmen ambushed Houthi vehicles north of Aden, a local official said.

The White House has said President Barack Obama had offered US support to Saudi Arabia's King Salman during a call with the ruler, saying the United States shared a "collective goal" with the kingdom to see stability in Yemen.

"The president reaffirmed the strong friendship between the United States and Saudi Arabia and emphasised the United States' support for the action taken by Saudi Arabia, Gulf Cooperation Council members, and others in response to President Hadi's request and in support of the legitimate government of Yemen," said National Security Council spokeswoman Bernadette Meehan.

King Salman, meanwhile, thanked the US for rescuing two Saudi pilots who ejected off Yemen's coast in international waters.

Washington has pledged logistical and intelligence support for the campaign.

Saleh called for "an immediate cessation of military operations by the coalition" and "a simultaneous immediate stop" by the Houthis, as well as a halt to looting of public buildings and army camps.

And he proposed a "resumption of dialogue... under the sponsorship of the United Nations, and its transfer to the United Arab Emirates or a UN building".

Iran has reacted furiously to the airstrikes, calling them a violation of Yemen's sovereignty.

The White House voiced concern about "reports of Iranian flow of arms into Yemen," while Riyadh lashed out at Tehran.

"The Iranians are the ones who are meddling in the affairs of the Arab countries whether it's in Lebanon, in Syria, in Iraq... in Yemen," the kingdom's ambassador to the United States, Adel al-Jubeir, told Fox News.

"We have to deal with Iran's aggression in the region. We're dealing with their support of the Houthis and the Houthis' attempt to take over in Yemen," he added.

Hassan Nasrallah, head of Lebanon's Hezbollah movement, which is allied to Iran, said Friday that Saudi Arabia will be roundly "defeated" in Yemen.

"The outcome of this war is clear: Saudi Arabia will be defeated and the Yemeni people will have an undeniable victory," Nasrallah said in a televised speech.

Hezbollah firmly criticised the operation, calling it "unjust" and "illegal".

"Saudi leaders have one last chance before they are defeated and humiliated," Nasrallah said.

A Saudi spokesman said that the Shiite Houthi militants were using civilians as "human shields".

Coalition forces "are doing everything possible to halt the Houthi advance on [the southern city of] Aden," al-Asiri said at a press conference held on an airbase in Saudi capital Riyadh.

Al-Asiri urged Yemeni civilians to steer clear of Houthi sites and positions, claiming that Houthi militants were using them as "human shields."

"Our first priority is the safety of Yemeni civilians, which is why we're urging them to avoid Houthi militant concentrations," he said.

Erdogan said the international community was concerned over the events taking place in Yemen and said the unity, safety and stability of the country was at risk, presidential sources in Ankara said on Friday.

Salman shared information with the Turkish President about the military operation and airstrikes launched by Saudi Arabia and its Arab allies against Houthi positions in Yemen.