Alqosh, Christian village on faultline of Iraq and Kurdistan 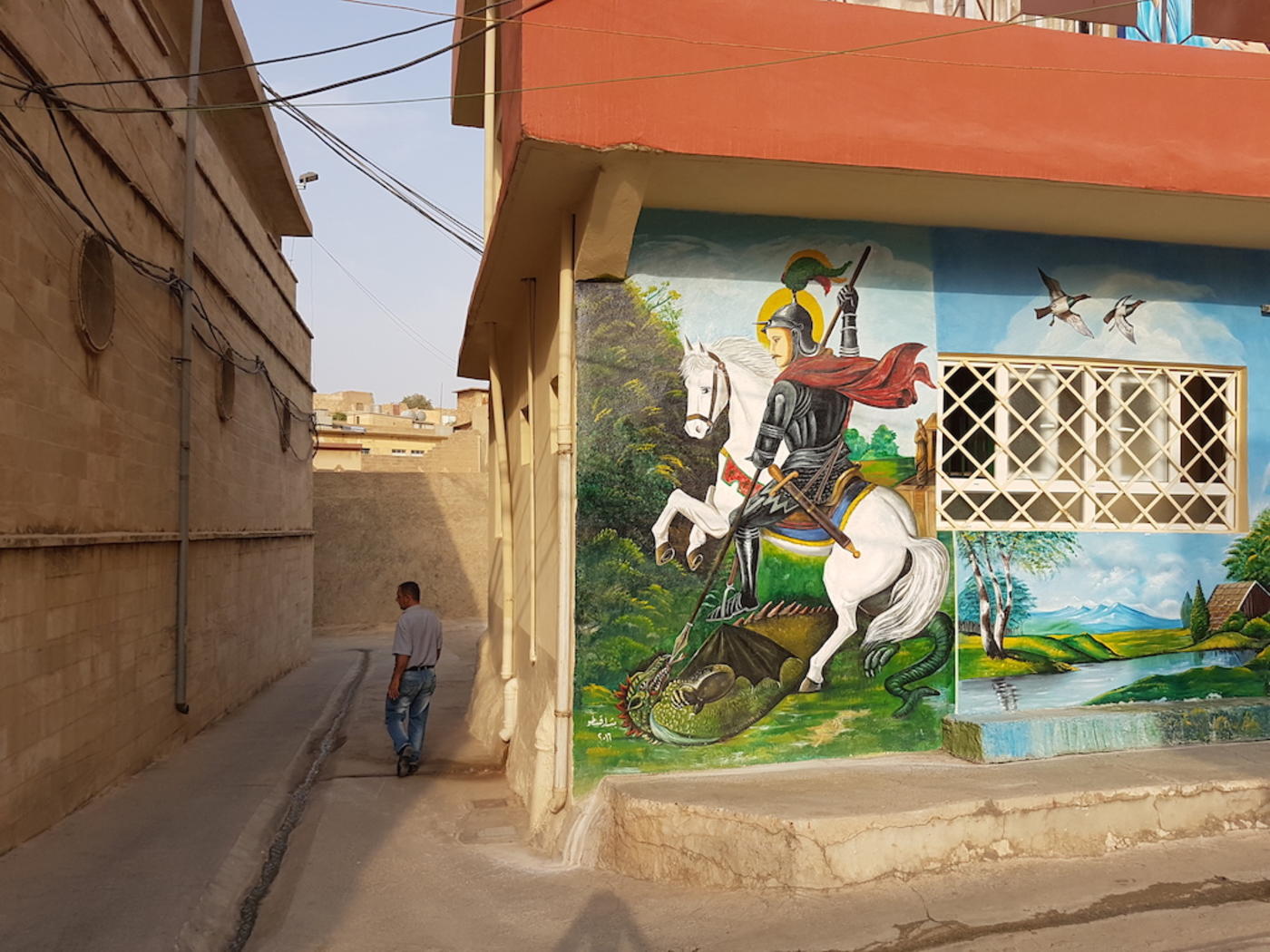 ALQOSH, Iraq - Louay gestured towards the Mar Mikha al-Nuhedri school. He said it has been in the town of Alqosh since the fifth century.

"They were the first one here and they are teaching the instruction of Christianity," he said. "They brought disabled kids here to teach them."

A caretaker in the house of the Catholic patriarch in Alqosh, Louay said he was thankful that his town and its heritage, with one of the last Assyrian Christian populations in the country, was now under the protection of the government of Iraqi Kurdistan.

"In Kurdistan, we have everything," he said.

Since the school was first built, the town of Alqosh in northern Iraq has been in the hands of many rulers, including the Abbasid caliphate, the Ottoman Empire and the Baathist government of Saddam Hussein.

The most recent struggle over the ownership of the town has come as the Kurdistan Regional Government (KRG) launches its bid for independence with a referendum on 25 September. Although Alqosh is, on maps anyway, part of Baghdad-controlled Iraq, the KRG's security forces have effectively controlled the town since 2014.

At that time, the Islamic State (IS) group swept eastwards across Iraq seizing control of swathes of territory.

Christians in areas controlled by IS were told to convert, pay a tax or face death. The letter "N" meaning "Nazareen" (referring to Jesus's ancestral home) was painted on the doors of Christian homes and another influx of refugees fled from their ancestral homelands.

Kurdish Peshmerga forces were integral in halting the IS assault and preventing them from pushing farther into Iraq and Iraqi Kurdistan.

Since then, Peshmerga forces have remained in the town, however, and the decision by KRG President Massoud Barzani and his allies to include Alqosh as part of a future Kurdish state has provoked outrage from those who say Alqosh is part of Iraq.

Locals in the town have expressed different opinions, but some argue that they face the best possible fate under Kurdish rule.

One man - speaking outside a Communist-themed cafe adorned with pictures of Josef Stalin and Che Guevara - said that the Kurdish government was the only real guarantor of their political and religious rights.

"Some people may oppose the referendum, but most of them are with the referendum," said Amr, a local tourism worker in Alqosh. "We are Christians here, we cannot live with the southern people, the Arabs.

He said the Kurdish government had built hospitals, provided electricity, water and other local amenities after years of neglect under Saddam Hussein and the post-2003 Baghdad government.

"We live in a free community in Alqosh, anybody can join any party, or any ethic, of any gender or beliefs, it's free for everybody to live together as brothers," he said.

"This cafe," he said, pointing, "belongs to a Communist, but I am from the KDP and my cousin is from the UDP, it's free for anybody to join anything.

"We feel safe here - with Kurdistan we feel safe."

Communism and Christianity are apparently equally at home in Alqosh. Built at the foot of the Bayhidhra mountains, the sandstone town is dotted with churches and Christian symbolism.

One wall mural depicts the Christian tale of St George and the Dragon, in which a knight faces down apparently insurmountable odds to defeat a dragon intent on devouring him.

Tucked away in the mountains above Alqosh is the Rabban Hormizd monastery, which has been there since 640 CE.

The only thing noticeably absent from Alqosh, however, is the flag of the Republic of Iraq. The only place the image of a unified Iraq appears is above the police station, clearly outnumbered and outgunned by the Kurdish Peshmerga and Asayish security forces.

Conversely, an Ottoman fort requisitioned by the Asayish is adorned with the green, red and yellow of the flag of Kurdistan.

Not everyone in the town has been happy about the Peshmerga presence there and some recent moves by the KRG have been seen as a power grab by locals.

In July, the mayor of Alqosh, Faiz Abed Jahwareh, was removed from his position - allegedly over corruption charges - and replaced with a member of the KRG's ruling Kurdistan Democratic Praty (KDP), Lara Yousif.

The move led to demonstrations in the town calling for the reinstatement of Jahwareh.

The Assyrian Democratic Movement (ADM), an Assyrian political party that favours remaining within a federalised Iraqi state, criticised the dismissals and has condemned the attempt to incorporate Alqosh within the remit of the Kurdistan referendum.

"We will not accept any sort of referendum to be held in the Nineveh Plain and areas of minorities," said MP Yonadam Kanna in early September.

As early as 2008, in a diplomatic cable released by WikiLeaks, Basim Bello - a former ADM mayor of Tel Keppe who was also deposed in August - warned that the KRG was attempting to take control of the Nineveh Plains with the aim of incorporating it into Kurdistan.

He said that KRG forces were attempting to "establish facts on the ground by moving Kurds into Christian areas; stacking district and sub-district councils with un-elected Kurdish members; and, in the case of Alqosh, spending lavishly, particularly on church and church-related construction".

Nevertheless, the rise in Islamic fundamentalism in Iraq since the 2003 invasion has partly toxified the relationship between Alqosh's Christian population and the central government in Baghdad.

Many now see the largely secular KRG as a safer bet in terms of protecting their rights against a government in Iraq they see as increasingly dominated by Iran.

An older Peshmerga fighter in Alqosh, decked out in military fatigues complete with a US army badge, was particularly scathing about the Popular Mobilisation Units (PMUs) or Hashd al-Shaabi, largely Shia fighting organisations who have been heavily involved in the fight against IS.

"We know most of the leaders of [the PMUs] belong to Iran. In Bartola they opened a school and named it 'Khomenei' and raised an Iranian flag there."

He said that if the referendum, which he supports, were to pass, then he would resist any attempts by the PMUs to take control of Alqosh.

"We ask God not to fight, but if we are forced to fight, we are ready for that."

Some, however, seem wary of the whole process.

One man sitting outside his shop front, who declined to be identified, said he felt that the referendum was just another populist ploy by Iraq's political class.

"Anything that happens either in Baghdad or happens here, they are all just looking out for their own interests," he said.

"As people we are living in the country, we don't want to be involved in political issues, we just want to live. So anyone who is going to authorise this, we are going to be with them. I don't want to interfere with any political party or political things."

He said that he was sick of the country's obsessive focus on religion and sect, which said had been "manufactured" since the 2003 invasion.

As he was talking, another younger man cut into the conversation.

"I don't think there are going to be any Christians anymore in Iraq," he said, lighting a cigarette.

"I think they are all going to leave." 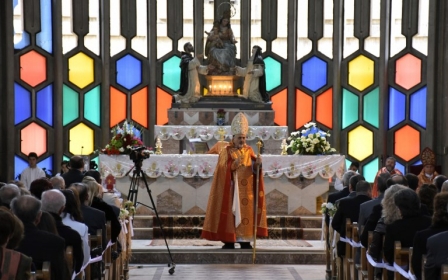