Amnesty International says websites like Booking.com and Expedia fail to tell tourists the West Bank and East Jerusalem are occupied 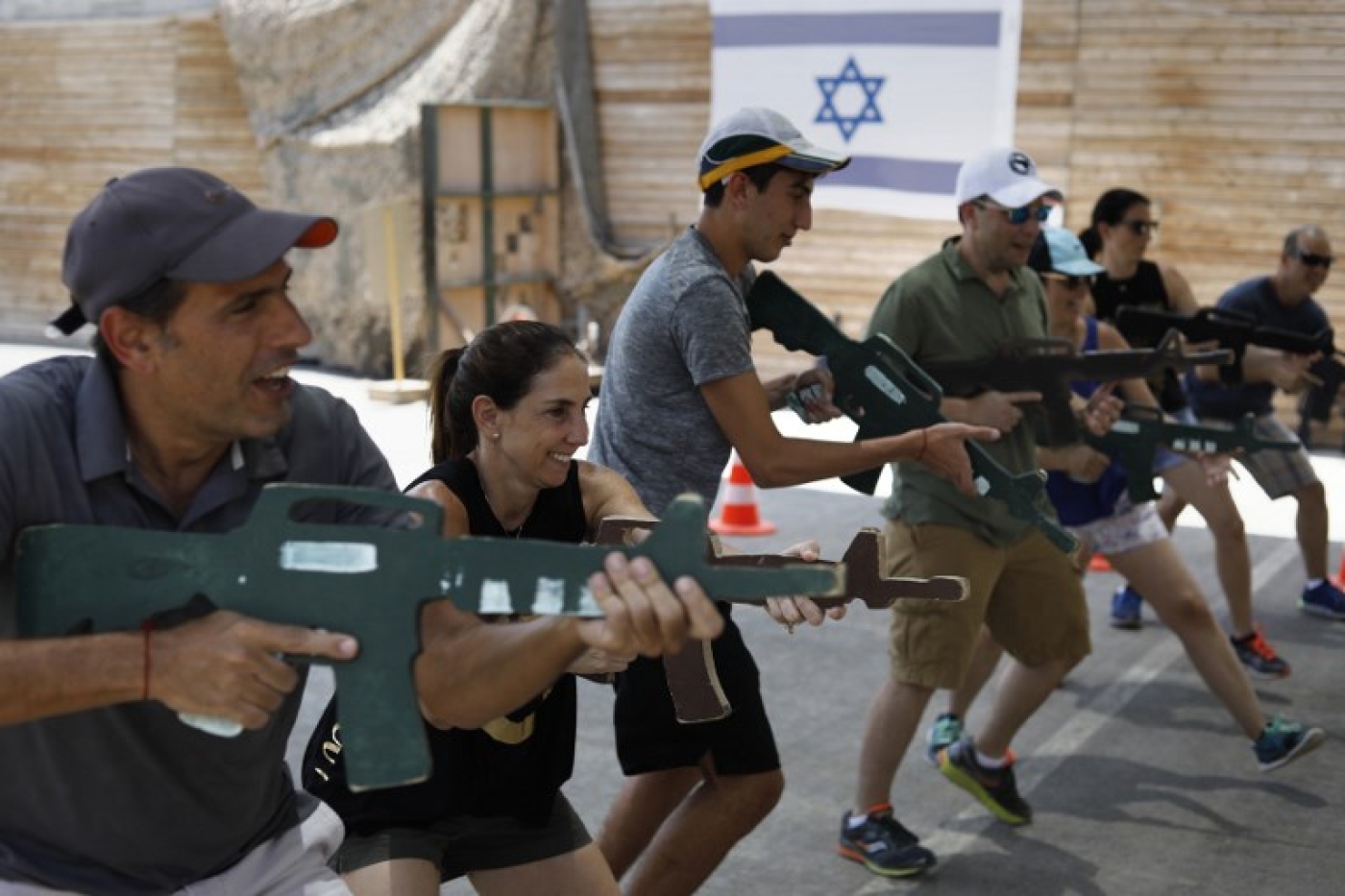 Tourists participate in a two-hour anti-terror course at the Caliber 3 shooting range, near the Israeli settlement of Efrat in the occupied West Bank, on 18 July 2017 (AFP)
By
Mustafa Abu Sneineh

An Israeli official has accused Amnesty International of anti-Semitism after the rights group released a detailed report accusing online tourism companies of profiting from listings in illegal Israeli settlements in the occupied West Bank and East Jerusalem.

Gilad Erdan, Israel's minister of public security and strategic affairs, tweeted that Amnesty "has become a leader in the anti-Semitic BDS campaign", referring to the Boycott, Divestment and Sanctions (BDS) movement for Palestinian rights.

The minister also asked his staff to examine the possibility of preventing Amnesty International staff from entering Israel and expelling those already there.

Earlier on Wednesday, Amnesty International called on Airbnb, Booking.com, Expedia and TripAdvisor to remove home- and hotel-rental listings in Israeli settlements and stop profiting from "war crimes" by offering services there.

"In doing business with settlements, all four companies are contributing to, and profiting from, the maintenance, development and expansion of illegal settlements, which amount to war crimes under international criminal law," the group said in its Destination: Occupation report.

The report studies several tourism listings, including in the West Bank towns of Hebron, Khirbet Susiya, Khan Al-Ahmar, Qaryut and Jalud, as well in as the East Jerusalem neighbourhood of Silwan.

About three million Palestinians currently live in the West Bank and East Jerusalem, while around 600,000 Israeli settlers - including 200,000 in East Jerusalem alone - live in the same area in settlements that are against international law.

Israel occupied the West Bank, East Jerusalem and the Gaza Strip in the 1967 war. It later unilaterally annexed East Jerusalem in a move never recognised by the International community.

Laith Abu Zayed, an Amnesty campaigner, told Middle East Eye that online tourism websites help Israel make its settlements "look normal" - and they do not make it clear that these areas are considered occupied under International law.

"Many tourists we met during our study did not know that this is [the] occupied territories. They thought it's part of Israel because websites such as Expedia and Airbnb list these places as part of Israel and this is a piece of misleading information," Abu Zayed said.

Airbnb is removing its listings in Israeli settlements
Read More »

Following a years-long campaign by Palestinian rights groups, Airbnb, a privately owned US-based company founded in 2008, announced in November that it would remove approximately 200 home-rental listings in Israeli settlements in the occupied West Bank.

While the move was welcomed by Palestinians and their supporters, it was immediately denounced by defenders of Israel, including members of the Israeli government. On Wednesday, Erdan said that Airbnb's decision was an act of surrender to the BDS movement, which "now comes with a price".

However, Amnesty's report found that Airbnb's commitment did not extend to 100 listings in settlements in East Jerusalem, "even though this too is occupied territory".

It also said that as of January, Airbnb had not yet implemented its decision and was still listing properties in the occupied Palestinian territories.

Listings near villages slated for demolition

Abu Zayed said that of about four million tourists that travelled to Israel last year, 45 percent of them visited the West Bank and East Jerusalem.

“It is a big percentage and it contributed to profiting [off] the occupation - the hotels and restaurants - and at the same time ignoring Palestinians," Abu Zayed said.

"Take the Shiloh tourist site, for example. Last week a Palestinian was shot and killed by an Israeli settler in the area, which is surrounded by settlements listed by online companies. Tourists will never hear about that."

The shooter in that attack was from the Adei Ad settlement outpost, a short distance from the Shiloh tourist site and the settlement of the same name, in the north of the West Bank.

In its report, Amnesty noted that Israel has constructed many of its settlements close to archaeological sites as part of an attempt to explicitly link the modern State of Israel to ancient Jewish history.

Shiloh is regarded by Jews as a holy site - with artifacts discovered there allegedly dating back to ancient Judea - but Abu Zayed said that a mosque had also been there for hundreds of years.

"Israel downplays or ignores the significance of non-Jewish periods at archaeological and historic sites," the report said.

TripAdvisor, the report shows, handles reservations and charges a commission fee for bookings at a "2-hour shooting experience" at Calibre 3, a self-styled counter-terrorism training centre run by former members of the Israeli army in the illegal settlement bloc of Gush Etzion, near Hebron in the southern West Bank.

Other rental listings were in particularly sensitive areas of the occupied territories, including near Palestinian villages slated for demolition.

According to the report, Airbnb, Booking.com, Expedia and TripAdvisor all provided listings for holiday rentals and a campsite in or near the settlement of Kfar Adumim.

The settlement lies next to Khan al-Ahmar, a Palestinian-Bedouin community about 10km east of Jerusalem that Israel has long planned to demolish.

Another Palestinian town slated for demolition is Khirbet Susiya, near Hebron in the south of the West Bank.

Israel has forcibly evicted residents of Khirbet Susiya to make way for a settler-run visitor attraction. Residents have also lost access to farmland as a result of the construction.

"In the case of Susiya, you do not just [have] a mosque, but people living there, and online tourism giants fail to mention these facts to their clients. [They need to do that] in order for them to make a responsible and informed decision," Abu Zayed said.