ANALYSIS: Was the Islamic State group responsible for car bombs in Gaza? GAZA - The rules are changing in Gaza. A recent series of five car bombs, which targeted the armed wing of Hamas and the militant group Islamic Jihad, were the first high profile attacks by individuals claiming to be affiliated with the Islamic State (IS) group.

The explosions on 19 July in the Sheikh Radwan neighbourhood, traditionally a Hamas stronghold, shook people’s homes nearby and reminded residents of Israel’s devastating assault on the Palestinian coastal enclave last summer.

Hamas has denied there is an IS presence in Gaza, however, there are certainly a number of people from the territory who are influenced by the group – some have travelled to Syria to fight while others have remained at home.

Following the car bombs, Hamas and Islamic Jihad released a joint statement describing those who carried out the attacks as “a group of hired suspects” attacking the vehicles of “Mujahedeen”.

The military wings of both organisations denounced the bombings as criminal, claiming they served Israel’s desire to sow seeds of discord and division among Palestinians, and both pledged to track down those responsible.

It is not the first time in recent years that a series of coordinated attacks have struck political groups in Gaza. During November 2014 several homes of Fatah leaders were targeted for bombings and several cars were also destroyed. No one claimed responsibility for those bombings, however, Fatah accused Hamas of being responsible, who in turn denied having targeted the West Bank based group’s leaders for attack.

The latest round of car bombings in Gaza have sparked several theories in the enclave about who may be behind them – especially after the claims of supposed IS involvement.

Security sources told Middle East Eye on condition of anonymity that those responsible follow the ideology of IS and aimed to increase instability and division in Gaza. The presence of an IS logo on walls near where the car bombs exploded has been used as evidence to back up this theory.

On social media, however, some IS supporters have said that the logo is old and not related to the recent attacks. Nevertheless, there are many people are believe the IS link to be at least partly true.

There is also a conspiracy floating around some local circles that Israel’s intelligence and armed forces may have been responsible. These people believe that Israel is trying to take advantage of regional issues by carrying out false-flag attacks in order to stir up tensions and encourage Hamas and Islamic Jihad to turn on the Salafists in Gaza.

There is, however, no evidence for this and it seems implausible that Israel would take the risky move of carrying out this kind of covert operation in the heartland of Hamas authority in Gaza.

Another theory is that radical Islamist groups, who are close to IS ideologically, carried out the attacks after one of their members was killed two months ago in the same area of Sheikh Radwan. In this scenario, the car bombs were designed as retribution and to send a message of strength to Hamas and its leaders in Gaza.

The targeting of Islamic Jihad leaders, in this instance, may have been to confuse investigators and muddy the waters as to the motivations behind the bombings.

Another conspiracy doing the rounds among Palestinians in Gaza is that the hidden hand of Iran is behind the attacks. The theory, for which there is again no evidence, is that Iran is trying to meddle in Gaza because of Hamas’ leaders recently having visited Saudi Arabia and held meetings with King Salman while on pilgrimage.

Riyadh has, however, denied that any political meetings took place during the Hamas visit.

Others in Gaza think the car bombings may have been carried out by other Palestinian groups attempting to bring the coastal enclave under the umbrella of the regional response to IS. The idea, in this instance, would be to show the world that Hamas and Islamic Jihad are too being attacked by IS and that Gaza also needs help in this regional fight.

One motivating factor in this instance would be to win military and financial support from Saudi Arabia.

All of these scenarios come together to paint a picture of confusion in Gaza. No one truly knows who was behind the five car bombs on 19 July but everyone is certainly talking about it.

There is concern that IS sympathisers are the most likely perpetrators of the attacks, especially given the fact that they took place just weeks after IS released a video threatening to overthrow Hamas for not adhering to their extreme interpretation of Islamic law.

For Hamas, at least in the short-term, the group sees little use in accusing IS of being responsible, as it would project perceptions of weakness in their grip over power in Gaza. The Hamas fingers remain pointed, no matter how unlikely, at Fatah leaders and the Ramallah based Palestinian Authority security services, assisted by Israeli authorities, in order to maintain the more comfortable narrative of Israel being behind all the ills experienced in Gaza. 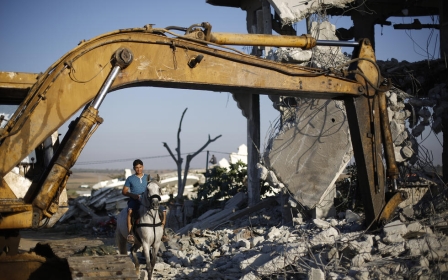