According to the hacker collective, the IS plans to attack the US, Lebanon, Indonesia and Italy Anonymous says it has taken down 5,000 Twitter accounts (AFP)
By
MEE staff

The hacker collective Anonymous said Saturday it has discovered planned Islamic State (IS) group attacks in the US, Indonesia, Italy and Lebanon. These attacks are allegedly to take place on Sunday. Among the possible attacks is an assault at the World Wrestling Entertainment (WWE) scheduled to take place in southern US city of Atlanta.

Last week, IS conducted a series of attacks in the French capital, killing 132 people.

"The goal is to make sure the whole world, or at least the people going to these events, know that there have been threats and that there is possibility of an attack to happen. Another goal is to make sure Daesh [Islamic State] knows that the world knows and cancels the attacks, which will disorientate them for a while," said an Anonymous spokesperson.

"We only appeared now because our goal was to remain undercover and report everything to the right authorities and let them take all the action. But when authorities do not take action, Anonymous does. This part of the op[eration] started last Monday and has [been] and will be active 24 hours a day as long as the op is going on," the spokesperson added.

Anonymous told the International Business Times it relayed the information to several intelligence agencies, including the CIA and Britain's MI5.

The hacker groups does not plan to release the proof publicly.

"If we share the proof [publicly], everyone will start calling it fake because screenshots can be edited and accounts can be deleted. We have purposely not shared account links publicly because they would be shut down immediately and then no one would believe the proof."

Anonymous declared war on IS last week, pledging to wipe the group out online as part of its Operation Paris (OpParis).

On the first day of OpParis, Anonymous stated that it had taken down over 5,000 IS Twitter accounts. Islamic State
Anonymous claims to take out 5,500 IS Twitter accounts 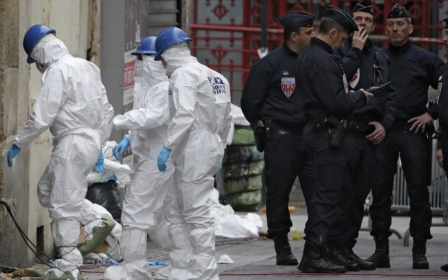