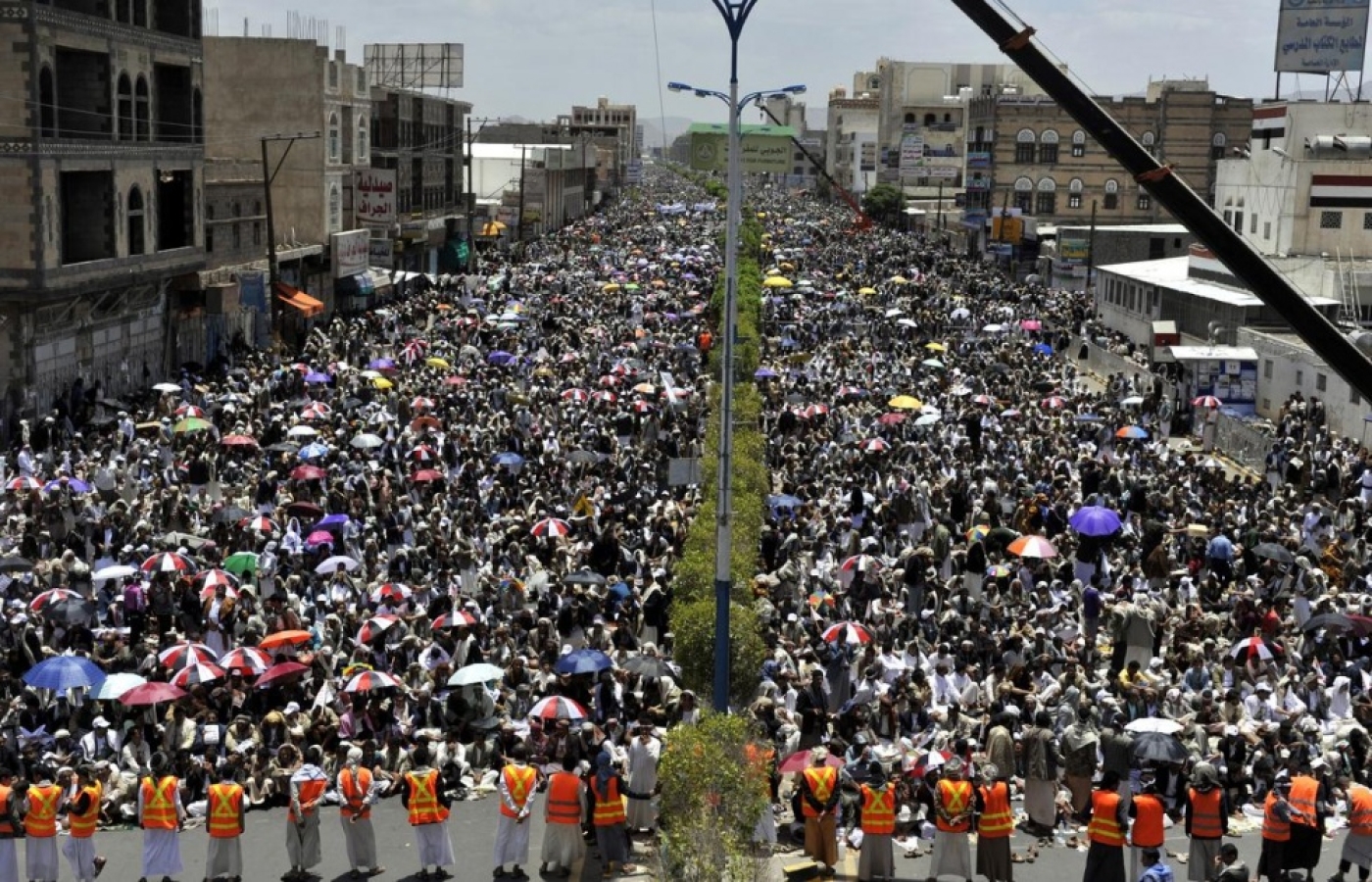 Anti-government protests in the capital of Yemen, Sana'a, on Friday (AA)
By
Yousef Mawry

A sea of Houthi supporters and anti-government protesters packed one of Yemen's main roads in the capital to perform Friday prayers and to officially launch the second phase of their campaign to topple the Yemeni government.

The government under Ali Abdullah Saleh waged six wars against the Shia rebels after the former ruler and Yemen’s Islah Party accused the movement of carrying out an Iranian backed agenda to overthrow the Yemeni government.

“We came today to send a message to the world that we will not accept this government,” said Ali Qahoom, a representative of the Houthis media office, who attended the Friday rally. “We will not stop our protesting until this government is toppled and is replaced with a new government that will support the people in ending this crisis."

The Friday speech was also delivered with a heavy dose of anti-government sentiment. The speaker accused the transitional government of being a western slave which strives only to please its masters, while ignoring its responsibility to the people.

He added that taking to the streets against the current regime is an ‘Islamic obligation’ and is the only way forward for Yemen.

As soon as the Friday prayers ended, the massive crowed immediately got to their feet and started to chant the revolution's famous slogan "the people want the downfall of the government", which continued throughout the demonstration. They were also addressed by Khalid al-Madani, a well-known Houthi figure, who took to the podium and ordered the protesters in attendance to march towards the Ministry of Electricity and the Ministry of Interior to assemble camps for sit-ins and anti-government activities.

Perturbed by the precarious unrest, President Mansour Hadi held an urgent meeting with Yemeni leaders about the Houthi expansion on Wednesday, where he expressed the need for a solution to diffuse the rising tensions.

He later dispatched a mediation committee to the northern province of Sa’da to negotiate with the Houthi leadership. In a phone interview with MEE, Ali Qahoom said the mediation committee proposed a resolution which called on the Houthis to give the Yemeni government a deadline of six months. In order to cut the fuel subsidies and to form a new government which will consist of Houthi representatives. According to Qahoom, the Houthis rejected the proposal; other reports suggested it was President Mansour Hadi who opposed it.

On Saturday Houthi sources told the MEE that after two days of negotiations, the mediation committee and Houthis reached an agreement on the formation of a new inclusive Yemeni government. Specific details of the accord have not yet been released: however, according to local reports the Yemeni government has strongly refused the Shia rebel's demand to lower the prices of fuel and diesel.

In the beginning of 2013, the Yemeni National Dialogue Conference was launched with the expectation of diffusing the political disputes, through peaceful negotiations between all conflicting Yemeni factions, including the Houthis.

After ten months of intensive dialogue between: Yemen’s Islah Party, The Southern Movement, Yemen’s Socialist Party, the Houthi group, the GPC and the Salafist group (Rashad Party), the NDC ended with the drafting of a document which outlined 2000 resolutions to be implement by a new Yemeni government.

However, the transitional government remained in power, which caused the Houthi delegates to withdraw participation from the NDC. They began to take to the streets to demand the downfall of the government which they professed unlawful.

The Houthi’s drive to dissolve the Yemeni government gained momentum after Hadi’s government decided to nearly double the prices of fuel and diesel at the end of July, a move which ignited public anger and streets riots deploring the fuel price hikes.

In an unprecedented event, the Houthi leader delivered a speech last Sunday in which he gave the Yemeni government an ultimatum: to reverse the cutting of fuel subsides by Friday, or else “legitimate actions” would be taken to tumble the government.