Turkish-backed rebels captured the emblematic northern Syrian town of Dabiq from the Islamic State (IS) roup on Sunday, dealing a major symbolic blow to the militants.

The Turkish foreign minister said the fighters will next advance to the town of al-Bab. Turkey in August embarked on an ambitious operation dubbed "Euphrates Shield" inside Syria, backing  opposition fighters to cleanse its border from the IS group and Syrian Kurdish militia forces.

The IS defeat in Dabiq comes after rebel fighters captured Jarabulus and al-Rai from IS in the early weeks of the operation.

"The next target is of course to move to al-Bab," south of Jarabulus in northern Syria, he told a joint news conference with his United Arab Emirates counterpart Abdullah bin Zayed al-Nahyan.

The town, in Syria's northern province of Aleppo, is of little strategic value.

But Dabiq holds crucial ideological importance for IS and its followers because of a Sunni prophecy that states it will be the site of an apocalyptic battle between Christian forces and Muslims.

The Observatory, a Britain-based monitoring group, said rebel forces "captured Dabiq after IS members withdrew from the area".

The Fastaqim Union, an Ankara-backed rebel faction involved in the battle, said Dabiq had fallen "after fierce clashes".

Turkey's state-run Anadolu news agency also said the rebels had taken control of Dabiq and Sawran and were working to dismantle explosives laid by retreating IS militants.

It said nine rebels had been killed and 28 wounded during clashes on Saturday.

Byword among IS supporters

Dabiq has become a byword among IS supporters for a struggle against the West, with Washington and its allies portrayed as modern-day crusaders.

Earlier this week, IS downplayed the importance of the rebel advance on the town.

"These hit-and-run battles in Dabiq and its outskirts - the lesser Dabiq battle - will end in the greater Dabiq epic," the group said in a pamphlet published online on Thursday.

The border area has become deeply unstable, and on Sunday three Turkish police officers were killed when suspected IS suicide bombers blew themselves up during a raid on their sleeper cell in the southeastern city of Gaziantep.

According to Anadolu, Ankara-backed rebels now control 1,130-square-kilometres along the border in Aleppo province, as the northern governorate that has been carved into zones of control by IS, Kurds, rebels, and government forces.

In provincial capital Aleppo, government troops have been waging a fierce Russian-backed offensive on rebels in the eastern quarters of the city.

Fighting continued in Aleppo's northern and southern outskirts on Sunday, as well as in the city centre, according to the Observatory.

AFP's correspondent in Aleppo said there had been nearly non-stop air raids on the opposition-held half of the city since midnight.

Two people were killed Sunday in air raids on al-Nazha, a neighbourhood in the city's east, the Observatory said.

Fighting has surged in Aleppo after the collapse last month of a ceasefire brokered by the US and Russia, raising serious international concerns. 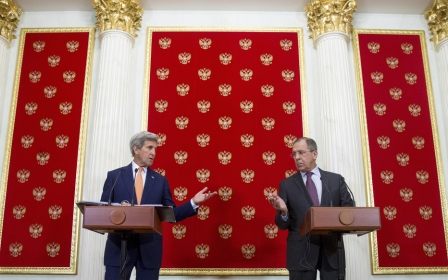 Syria War
US, Russia and allies meet to talk Syria, but with little hope of breakthrough