Arab public prefers light US footprint, even in Syria 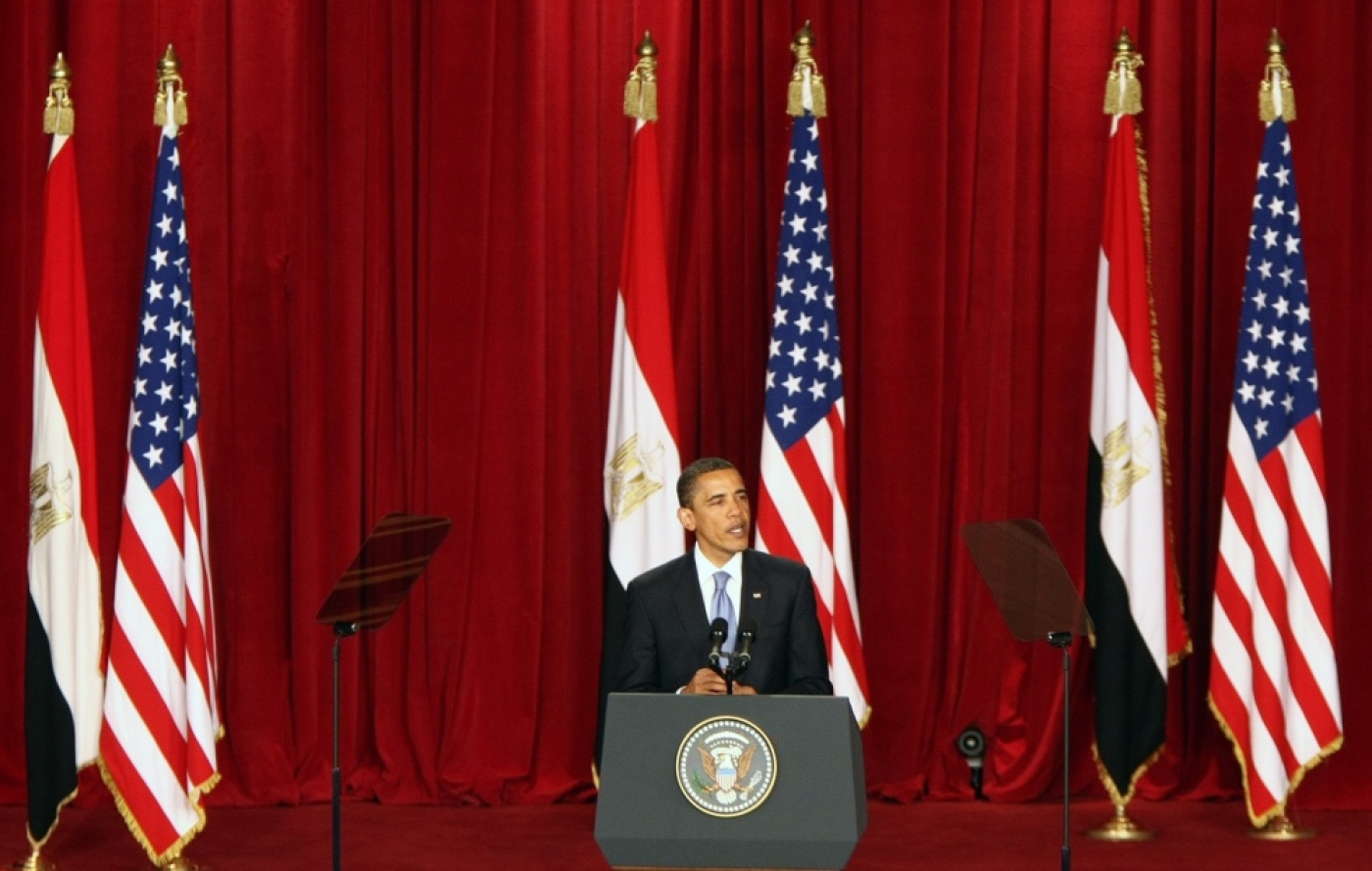 US President Barack Obama delivers his message to the Muslim world in Cairo University campus in Cairo during a visit to Egypt on 4 June, 2009 (AFP)
By
IPS

WASHINGTON - In contrast to some of their leaders, people across the Arab world prefer President Barack Obama’s efforts to reduce Washington’s military footprint in the Middle East to the approach favoured by neo-conservatives and other US hawks, according to the latest in a series of surveys of Arab public opinion released here Tuesday.

While the popular perception of US policies in the region remains largely negative, the survey, which included six Arab countries and the Israeli-occupied Palestinian territories, found a notable increase in Arab support for Obama compared to three years ago, as well as strong majorities who said that having “good relations with the United States” was important to their country.

Overall, Arab attitudes toward the US are back roughly to where they were in 2009 shortly after Obama took office, according to James Zogby, president of the Arab-American Institute (AAI) and director of Zogby Research Services, which conducted the poll.

Obama’s accession ended the eight-year reign of President George W. Bush (2001-2009), whose military interventions in Afghanistan and Iraq and nearly unconditional support for Israel brought US. favourability ratings in the region down to the single digits in most countries.

Among other findings, the poll found that Bush evoked the most negative views by far of the last four US presidents in six of the seven countries covered by the survey.

“Overall, my takeaway is an uptick [for Obama and the United States],” Zogby told a forum at the Middle East Institute (MEI) where the survey results and an accompanying analysis, ‘Five Years After the Cairo Speech: How Arabs View President Obama and America’, were released.

The main lesson to be learned from the increase in positive sentiment toward Obama and the US, he suggested, was “the less damage you do, the better off you are.”

He cited the fact that Washington’s withdrawal from Iraq and its negotiations to curb Iran’s nuclear programme were considered by respondents in all of the countries except Lebanon to be the two “most effective” efforts by the administration to address the challenges it faces in the Arab world.

The survey, which was based on interviews last month of representative samples (800-1,000 in each country) of respondents in Egypt, Jordan, Lebanon, Morocco, Saudi Arabia, the United Arab Emirates (UAE), as well as Palestine, produced a number of notable findings on a variety of other issues, several of which appeared to support Zogby’s observation.

Despite the repeated insistence by a number of Arab leaders - as well as Obama’s hawkish critics here - that the US should do more militarily to oust Syrian President Bashar Al-Assad, significant majorities in all surveyed countries opposed any form of US military engagement, including establishing “no-fly zones,” carrying out air strikes, or even supplying more advanced weapons to rebel forces.

Given a menu of six policy options for the US to pursue in the three-year-old civil war in Syria from which they were asked to choose two, majorities ranging from 51 percent (UAE) to 82 percent (Morocco) in all seven countries opted for providing humanitarian relief to refugees.

Seven in ten Moroccan and Lebanese respondents chose “leave Syria alone”, as did 54 percent of Jordanians. The next most-popular option in the remaining countries - but most popular in Egypt - was “pressing the parties” to negotiate a transitional government.

The new survey found virtually no support for direct US. military intervention in any country, despite the fact that a just-released poll by the Pew Research Centre showed that between six and seven out of ten respondents in Palestine, Jordan, Egypt, and Tunisia hold a “very negative view” of Assad.

Nonetheless, the anti-Assad sentiment “doesn’t translate into Arabs wanting the United States to intervene directly or even provide aid to [the rebels],” said Marwan Muasher, a former Jordanian foreign minister with the Carnegie Endowment for International Peace here. “If I were an Obama adviser, I would use this poll to say that we [have been] right.”

In another blow to US hawks, especially neo-conservatives who have urged a more muscular policy against Syria and Iran, the new poll found that the civil war in Syria has not displaced the Israel-Palestine conflict as the most pressing concern among Arab publics about US policy.

Asked to choose from seven options that they considered the most important challenges for US-Arab relations, pluralities and majorities ranging from 45 percent (Saudi Arabia) to 76 percent (Morocco) cited Israel-Palestine in six of the seven countries. Only in the UAE was the war in Syria considered by a plurality to be more important.

Remarkably, ending Iran’s nuclear programme was among the least-chosen options, even in Saudi Arabia and the UAE whose governments have been the most hawkish toward Tehran.

Similarly, asked to choose the single greatest obstacle to peace and stability in the Middle East among six options, pluralities and majorities in all but the UAE cited the “continuing occupation of Palestinian lands”.

While Iran and its nuclear programme were not seen as particularly threatening by majorities in the seven Arab countries, Tehran’s favourability ratings continued their sharp decline since 2006, when its support for Hezbollah during the war with Israel and defiance of the US gained it strong backing throughout the Arab world.

While a majority in Lebanon (81 percent) and a 50-percent plurality in Palestine view Iran favourably today, fewer than a quarter of respondents in the other five countries said they saw Iran in a generally positive light. Only one percent of Saudi respondents said so.

Muasher suggested two main factors appeared to contribute to the disillusionment; the repression that followed the disputed 2009 presidential elections and, more important, Iran’s backing for Assad in Syria.

One of the new survey’s most notable findings dealt with US policy toward Egypt and the changes of government there over the past three years, according to Zogby. Asked whether the US was “too supportive, not supportive enough, or just right” toward each government, majorities in all countries except Palestine said Washington was “too supportive” of Hosni Mubarak.

Perhaps more surprising, pluralities and majorities in five of the seven countries - including 61 percent in Egypt itself - said Washington was “not supportive enough” of Mohammed Morsi’s presidency.

The exceptions were Lebanon and UAE, which, along with Saudi Arabia, have been the interim government’s biggest financial supporter since the military coup that ousted Morsi. Even in Saudi Arabia, which has led the counter-revolution against Morsi’s Muslim Brotherhood across the region, a 44-percent plurality said Washington had not given Morsi enough support.

While Arabs remain highly critical of US policies in the region, there has been an increase in Arab support for Obama in all seven countries since 2011, the year when he ceased insisting on an Israeli settlement freeze in the West Bank and when the hopes raised by his inauguration and subsequent speech in Cairo in which he pledged improved relations with the Arab world collapsed across the region.

At that time, ten percent or fewer of respondents in each country said they supported Obama’s policies. In 2014, that support increased ten-fold in Egypt (to 34 percent), eight-fold in Jordan (to 25 percent), nearly five-fold in UAE (to 38 percent), about three-fold in Morocco and Saudi Arabia (to 28 percent and 34 percent, respectively).

Favourability ratings for the United States have also improved over the last three years, although they have lagged behind Obama’s, according to the survey.

Arab Spring
The dismal record of the Riyadh-Abu Dhabi axis in the Arab world
Adlene Mohammedi
Arab Spring
Can the Arab uprisings move toward a successful revolution?
Joe Gill
Arab Spring
Arab Spring 2.0: The people are showing the rulers how to govern
Ferid Belhaj 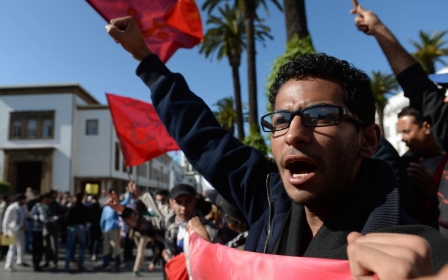 Egypt Vote
Why Sisi will be overthrown, soon
Abdelrahman Rashdan