Meanwhile, Sudan's Bashir gives more details in court about Saudi and Emirati largesse, and a US TV channel lands in hot water in Iraq after a report on corruption Bahraini Foreign Minister Sheikh Khaled bin Ahmed bin Mohammed al-Khalifa criticised Hezbollah’s attack on Israel on Sunday while accusing the Lebanese state of "only watching" the escalation on its borders.

"The aggression of one state against another is prohibited by international law. A state’s apathy towards battles taking place on its borders, subjecting its people to danger, is a major complacency leading that state to shirk any responsibility in the matter," the Bahraini minister wrote on Twitter.

The Bahraini minister's tweet was met with a wave of outrage from Arab bloggers who criticised him and said he was biased in favour of Israel in its conflict with Hezbollah.

On Sunday, Hezbollah announced the destruction of an Israeli military vehicle in the Avivim area, near the southern borders of Lebanon. Israel counterattacked by firing on southern Lebanon, raising fears of a serious escalation with Hezbollah after a week of escalating tension.

Hezbollah and Lebanese authorities accused Israel of launching an attack by two drones in the southern suburbs of Beirut a week ago.

Bashir admits to receiving funds from Saudi Arabia and UAE

Ousted Sudanese President Omar al-Bashir has admitted receiving funds from Saudi Arabia and the United Arab Emirates and keeping them personally away from state institutions. This came in the latest court hearing session on corruption cases, according to details published by Al-Quds Al-Arabi, which said that its correspondent attended the hearing session.

Bashir admitted again that he had received $25 million from Saudi Crown Prince Mohammad bin Salman and said that he had “personally taken it from bin Salman and preferred to store it in his palace instead of handing it over to the Bank of Sudan". Bashir also admitted that he paid millions of dollars to businessman Tariq Sir El Khatim, the husband of one of his relatives, according to the London-based newspaper.

He also admitted to having personally received a $1 million-check from UAE President Sheikh Khalifa bin Zayed during a previous visit to the Emirates.

However, he said he did not know whether the check was drawn from a UAE bank.

“I do not know where to cash this check now,” he said, prompting the prosecution to wonder how a head of state could personally receive a check worth such a large amount without knowing whether he cashed it or not.

The US-based Arabic language TV channel Al-Hurra has been suspended in Iraq after running a report over the weekend on allegations of financial corruption involving senior officials in the country, including the fate of huge funds run by figures and institutions in shrines and religious sites in Karbala.

The US embassy in Baghdad also issued a statement disowning the content of the report published by the US channel, amid expectations that anger would escalate and result in demonstrations heading toward the embassy and to Al-Hurra's office in Baghdad.

The embassy said in a statement that “the State Department and US embassies around the world do not have supervisory authority over the content of the programs of Al-Hurra TV”, insisting that “the Iraqi government has the right to respond to and hold accountable Al-Hurra for any report it believes to be inaccurate or far from being professional, or contradicts US policies". 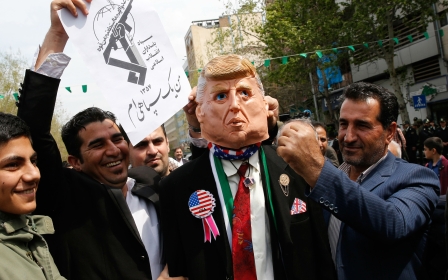