Meanwhile, a Saudi activist was arrested for posting a video highlighting bread shortages in the kingdom; and in Algeria, an anti-government activist was released after nine months of detention Parliament speaker Ali Abdel Aal refused to suspend plenary sessions planned for next week, even after reports of new infections among MPs (AFP)

Egypt has recorded new coronavirus cases among its lawmakers, bringing the number of infected MPs to seven as parliament prepares to increase its sessions next week, the London-based Al-Araby Al-Jadeed newspaper reported.

Parliamentary sources said that the deputy of Sohag province, Mamdouh Muqaled, contracted the coronavirus, known officially as Covid-19, days after supposedly recovering from the illness and coming out of hospital isolation.

The sources said Muqaled had met with senior officials in the ministries of health and education after his health condition stabilised, and was later surprised to have tested positive again.

The parliament also reported infections among employees in some of its committees, including budget and health affairs, in addition to two journalists from Youm7 and Al-Wafd newspapers and a photographer assigned to film the plenary sessions.

The sources said that Parliament Speaker Ali Abdel-Aal refused all suggestions of suspending the sessions, insisting on holding them on time, starting Sunday.

Saudi authorities arrested an activist well-known on social media for circulating a video about bread shortages in stores, according to Arabi21.

The activist, known as Abu al-Feda, posted a video from inside a market describing shelves designated for bread as “empty”.

Government loyalists called for Abu al-Feda’s immediate arrest on social media after the video was published, saying it violated the general prosecution’s warnings that filming empty store shelves is punishable for spreading terror among people. Hours later, loyalists published news of his arrest.

Abu al-Feda was named globally at the end of March when US President Donald Trump published a tweet in which he referred to an account that had the image of Abu al-Feda via Twitter.

Trump tagged Abu al-Feda in a tweet about the coronavirus pandemic, mistaking his handle “@FdA” with the Food and Drug Administration (FDA) “@US_FDA”.

An activist in Algeria's anti-government movement was released from prison on Thursday, following nine months of temporary detention for calling for civil disobedience, the London-based Al-Quds Al-Arabi newspaper reported.

Sharif Ghassoul was detained on 24 August 2019 after a sign urging civil disobedience was found in his possession, according to his lawyer Arezqi Aliwat.

"The charges were trumped-up," Aliwat said.

On Thursday, Ghassoul was handed a six-month prison sentence by a court in Bordj Bou Arreridj, a province in Algeria’s southeast, and was released on time served.

During the trial, which started on 21 May, the public prosecutor’s office requested a five-year prison sentence for Ghassoul, the maximum penalty prescribed for similar charges in Algeria. 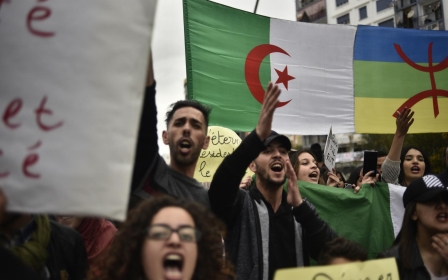