Jordanian health official warns of health crisis in the kingdom, while the UAE institute visa restrictions for Tunisians 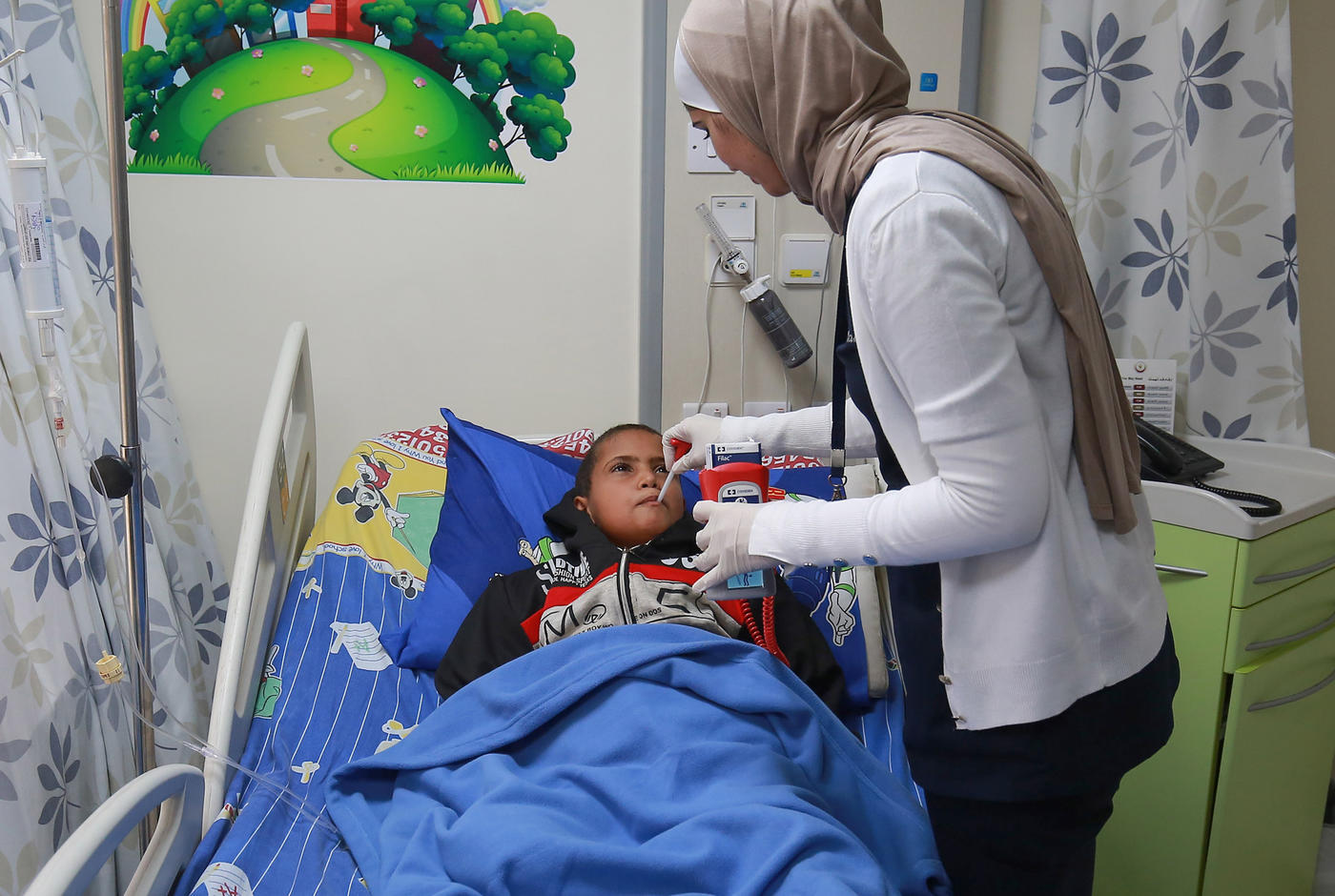 Yemeni Aymen, who is suffering from a congenital spinal malformation, receives treatment at a private hospital in the Jordanian capital Amman (AFP)
By
Mohammad Ayesh

One out of every three children in Jordan suffers from anaemia according to a senior health official, reported The New Arab newspaper.

The secretary-general of the Higher Population Council in Jordan, Abla Amawi, said that children in the country were facing serious health hazards, adding that 32 percent suffered from the blood cell condition.

Amawi also revealed that children constitute a quarter of the victims of fatal traffic accidents and that 79 percent of children with disabilities are not enrolled in schools.

The results of the Jordan Population and Family Health Survey (JPFHS) showed that 3 percent of Jordan’s children under the age of 18 and 5 percent of Syrian children living in Jordan were orphans.

The council also found that “the coronavirus pandemic has aggravated the social and economic challenges facing the most vulnerable children and youth, as the number of families with a monthly income less than 100 Jordanian dinars ($140) has doubled since the outbreak of the pandemic".

The UAE has confirmed it will be imposing visa restrictions on Tunisians, limiting visas to married Tunisians and their children, those over 60 years old and those who have residence permits in one of the Gulf countries.

The head of the air transport committee of the Tunisian Association of Travel Agents (FTAV), Abdelaziz ben Issa, confirmed the decision, according to the local Ultra Tunisia website, one day after the end of the visit of Tunisian President Kais Saied to Qatar. Ben Issa added that the move came at a time of year when requests for UAE and Gulf states visas were increasing.

Saied completed an official visit that lasted three days to Qatar at the invitation of the emir, Sheikh Tamim bin Hamad Al Thani.

In an interview with Qatar News Agency, Saied implicitly criticised the wave of normalisation agreements with Israel signed by some Arab countries, including the UAE, saying: “We do not interfere in any country’s free will, but I believe that the Palestinian cause is a central issue even if many have tried unsuccessfully to exclude it from the Arab citizen's circle of interests, but it will remain a central issue for the Arab and Muslim nations."

On 22 December 2017, the UAE decided to temporarily ban Tunisians from travelling and entering the UAE, causing a wave of anger and resentment among Tunisians.

In response, the Tunisian Ministry of Transport suspended Emirates airlines flights to and from Tunisia.

Norwegian mediation between Palestinians and Israel

The newspaper said that "secret meetings and mediation efforts made by a European country", coupled with the victory of the Democratic candidate Joe Biden in the US presidential elections, heavily influenced the decision. Israeli and Palestinian officials already held a secret meeting, the first in about six months, to coordinate the transfer of funds that Israel collects by imposing taxes on Palestinian goods to the treasury of the Palestinian government, said the report.

The funds were withheld by Israel for six months which caused the PA significant financial difficulties.

The tax funds that the authorities demanded the Israeli side to hand over are estimated at more than $195m per month.

On 19 May, the PA announced the suspension of security, economic and political cooperation with the Israeli authorities, before retracting the decision as 17 November.

The Saudi Public Investment Fund (PIF) has announced that it will reduce its transactions in the US stock market, cutting its stocks by $3bn in the third quarter of 2020, reported Al Khaleej Online.

During the third quarter, the fund disposed of all its shares in six companies, including Cisco, Booking and Berkshire Hathaway, owned by billionaire Warren Buffett.

On the other hand Saudi Arabia retained all its shares in six companies, including Uber, which offers transportation services via its application.