Meanwhile, a Saudi prince says those asking about Khashoggi’s corpse are 'parrots', and an Egyptian journalist has been found hanged in her home Kuwait has announced ending the contracts of 25,000 expatriates working in the government sector, to replace them with Kuwaitis, according to the Kuwaiti newspaper Al-Rai.

The measure comes as part of a government campaign that has been in place for years, aiming at reducing the unemployment rates among Kuwaitis.

The head of the Kuwaiti parliamentary Human Resources and Development Committee, MP Khalil Al-Saleh, announced the termination of 25,000 expatriates’ services following a parliament session on Tuesday.

Saleh told the Rai newspaper that the number of Kuwaitis waiting to be recruited has been reduced to 6,000, and they will be distributed to government agencies during the coming period.

He added that, according to the replacement policy, 4,640 expatriates had been laid off in the last two years with a vision to employ Kuwaiti nationals.

Saleh said that 1,500 Kuwaitis were expected to be hired in the banking sector in the coming days.

Saudi Prince Abdulrahman bin Musaad has commented on a question raised by a Twitter user inquiring about the fate of the body of Saudi journalist Jamal Khashoggi, killed at his country's consulate in Istanbul in 2018.

Bin Musaad said in tweet that the killers involved in the murder of Khashoggi were being prosecuted before the judiciary, and that the body was cut and handed over to a Turkish contractor, according to the investigations.

He added: "Where is the body? What a question that you keep repeating like parrots …!  The man was killed in a heinous crime and the perpetrators are facing justice and his body was cut by them in a despicable act and this is not a secret. The prosecution talked about this in detail and stated that the body was handed over after being dismembered to a Turkish contractor."

The Saudi prince said in another tweet: "The subject of Khashoggi is now before the judiciary, and the victim’s children, who are the sole defenders of their father’s rights, declared their confidence in the judiciary of their country and announced this in the US media."

An Egyptian journalist has been found by her family hanged inside her house in Egypt's capital Cairo in mysterious circumstances, according to the Egyptian newspaper Al-Watan.

The family of journalist Rehab Badr had to break into her apartment to find out why she had not answered their calls, before finding her body hanging from a ceiling fan in one of the rooms. Al-Watan reported that the security services in Cairo were intensifying their efforts to uncover the mystery surrounding the incident.

The investigators are collecting information about people close to her to find out whether or not there was a criminal motive, according to the newspaper.

A source in the Cairo Security Directorate told the paper that preliminary evidence pointed to suicide.

The source added that after initial fingerprints were extracted, the evidence indicated that Badr had killed herself. The family and husband are being investigated in order to uncover the victim’s possible reasons and motives.

Badr had worked as a press officer with the Luxor African Film Festival, according to Al-Watan.

Saudi activist Ghanem al-Dosari has claimed that Saudi Crown Prince Mohammed bin Salman was behind "secret attacks targeting the opponent of the Saudi regime", he was quoted as saying by Al-Quds Al-Arabi newspaper.

'They are spying on everyone who criticises them'

In the interview with the Arabic service of the Turkish Anadolu news agency, Dosari said that the "targeting of dissidents during the era of bin Salman is taking place openly", and that his mobile phone was hacked. He added that he filed a lawsuit against the Saudi government in Britain for this reason.

He also said that he was assaulted by Saudis in London, where he lives, pointing to the presence of people watching his movements.

"London police visited me and informed me that my safety is threatened. I have been placed under police protection, although the security services did not disclose the source of the threat," Dosari said. "However, I believe that the source of the threat is the Saudi regime, as many opposition activists are being spied on by the crown prince.

"They are spying on everyone who criticises them, and they publicly disclosed that." 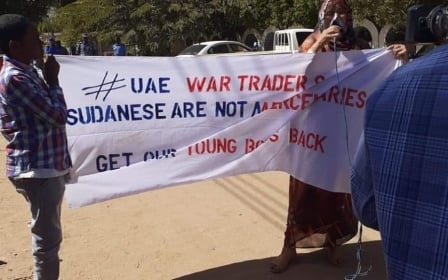