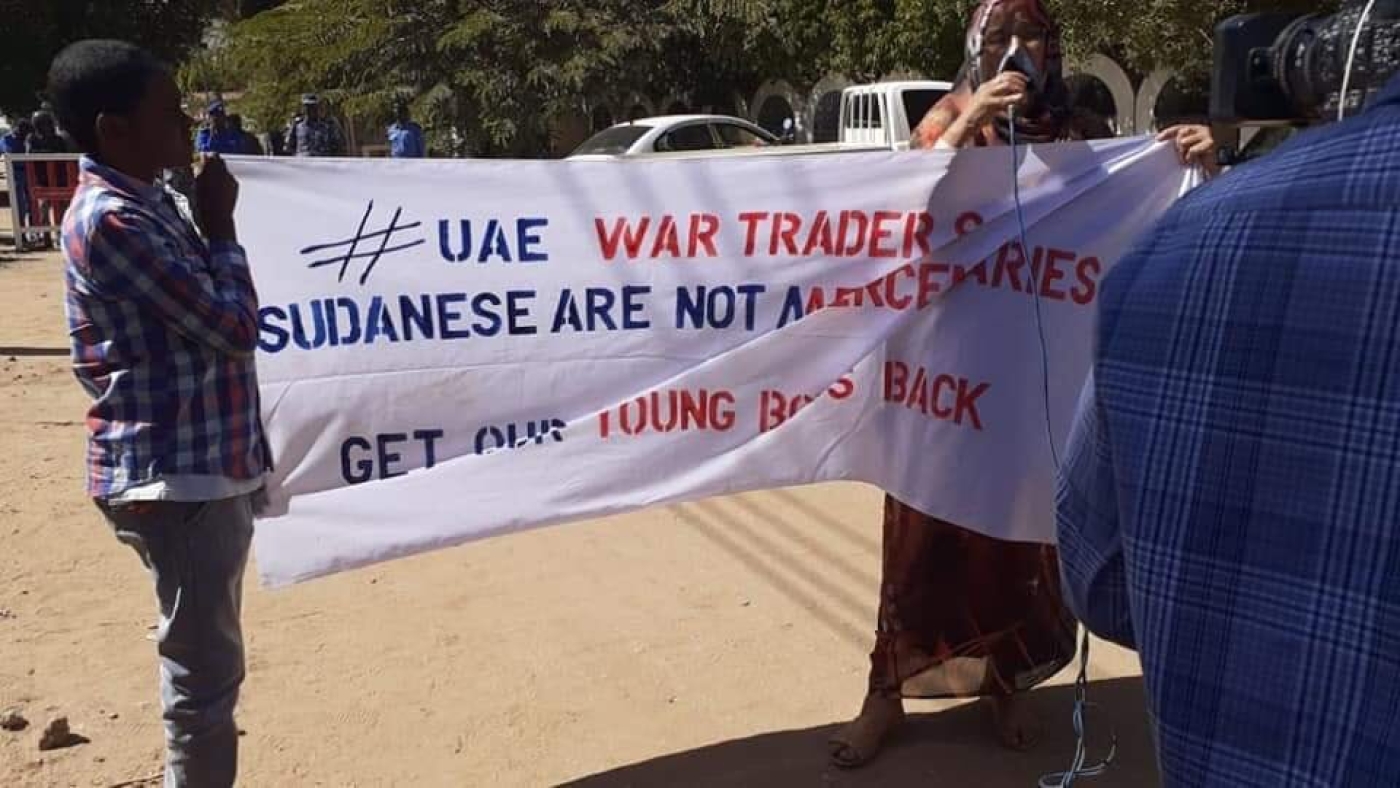 A number of Sudanese families have held a protest in front of the embassy of the United Arab Emirates in the capital Khartoum. They are protesting what they say are contracts between an Emirati company and their sons to send them to fight in Yemen and Libya, according to the Al-Quds Al-Arabi newspaper.

The protesters say a company is recruiting young Sudanese men as security guards for private companies in the UAE, but the men arrive there, they are surprised by the choices they are given: either fighting in Yemen or Libya.

Witnesses reported that dozens of Sudanese organised a protest in front of the UAE embassy on Sunday, and held banners reading: "No to mercenarism," "No to charlatanism," "No to deception," according to the London-based newspaper.

A Sudanese family demanded the transitional government on Friday to intervene to return their son, who has been detained in a training camp for three months, from the UAE, after he and others were "deceived", the report added.

Twitter users published samples of the contracts for security guard positions in the UAE.

A few days earlier, activists revealed the involvement of the Emirati company in recruiting about 3,000 Sudanese young men and turning them into mercenaries, according to Al-Quds Al-Arabi.

Egyptian and Gulf sources revealed a new Saudi intervention in the Libyan crisis that includes providing a large financial and military aid package to Khalifa Haftar, commander of the Libyan National Army, in order to sustain Saudi influence in Libya, according to the London-based newspaper Al-Araby Al-Jadeed.

The sources explained that Saudi Crown Prince Mohammed bin Salman pledged to Haftar to send military aid as soon as possible to strengthen his power, in an attempt to impose a new reality on the ground.

The sources also stated that although there is a red line set by the European powers not to let Haftar enter the capital Tripoli, which is under the control of the internationally recognised Government of National Accord, the Arab camp supporting Haftar, represented by Saudi Arabia, the UAE and Egypt, is still insisting on supporting the general, especially after Turkey imposed itself as a partner in the resolution of the crisis.

Tensions between Riyadh and Ankara have mounted since the assassination of Saudi journalist Jamal Khashoggi inside the Saudi consulate in Istanbul and Turkey's open investigation into the murder.

"Saudi Arabia has not been significantly involved in the Libyan crisis, leaving the matter to the Emirati and Egyptian allies", a Gulf source told the newspaper.

"However, Turkey’s growing role in the crisis... has prompted Saudi Crown Prince Mohammed bin Salman's involvement to try and thwart Erdogan and defeat him indirectly through the Libyan crisis."

Investigations by Kuwait’s security services showed that a high-ranking official is involved in leaking important and sensitive information to fake social media accounts, according to the Kuwaiti Al-Qabas newspaper.

"A figure in a sensitive position is involved in leaking sensitive information that was published on social media by accounts known for spreading disorder and confusion," the daily said.

Al-Qabas quoted a well-informed source as saying that "the high-ranking official has spread incorrect information to affect people working in the sensitive area in which he works. It also turned out that he has cooperated with the fake accounts owner, with whom he has close ties."

The source indicated that this high-ranking official does not yet know that he has been identified, and is still holding his position. It is expected that he will be arrested soon.