The Iraqi judiciary said on Sunday it had issued an arrest warrant against Trade Minister Malas Abdulkarim al-Kasnazani on corruption charges.

"The central investigation court has issued an arrest warrant against the minister of trade and his brother on charges of financial corruption," judiciary spokesman Abdelsattar Bayraqdar said in a statement.

The pair's case has been transferred to a specialised anti-corruption court in Baghdad, he said.

Kasnazani, who took part in a cabinet meeting in the morning, later issued a statement saying he would cooperate with the judiciary and head to court himself to deny the charges, which remain unclear at this stage.

Kasnazani is the highest-ranking official to be targeted by an arrest warrant since Prime Minister Haider al-Abadi promised a crackdown on graft in August.

The trade minister is a political ally of Iyad Allawi, a politician who has been accused by the main Shia bloc in government of abetting insurgent Sunni groups.

Allawi held one of the three vice-president jobs Abadi scrapped as part of his reform package but the former interim prime minister is challenging the decision. Many of Abadi's measures have yet to be implemented.

The judiciary's statement provided no details on the accusations against the minister and his brother. But Iraqi media reports said Kasnazani is suspected of awarding contracts without tenders to firms linked to his Jordan-based brother Nehru, a wealthy businessman who once had presidential aspirations. Most public or government contracts require multiple companies to apply for tender in order to boost competition.

Their father, a Kurd who once ran a militia backed by former president Saddam Hussein to oppose peshmerga rebels, is the leader of the largest Sufi order in Iraq, the Kasnazani order.

Sufism, which focuses on the mystical dimension of Islam, is widespread in Iraq. Orders that transcend the Sunni-Shia divide are organised around a grand master and meet to perform specific rituals, which can include music, dance and trance.

Malas and his two brothers - Nehru and Gandhi - were arrested in the late 1990s, allegedly for forging Saddam's signature, but were released and fled to Kurdistan, an autonomous region of northern Iraq.

Their father is believed to have once had close ties with Izzat al-Douri, who was Saddam's number two and is also a Sufi. Douri was reported killed in a military operation the Talal Hamreen mountains near Tikrit in April 2015, according to the governor of the Salahuddin.

Douri and his loyalists were allied with the Islamic State group in the early phase of the IS offensive in June 2014.

The Kasnazanis fell out with Saddam near the end of his reign and are reported to have played a key role in assisting the United States in planning the 2003 invasion of Iraq. 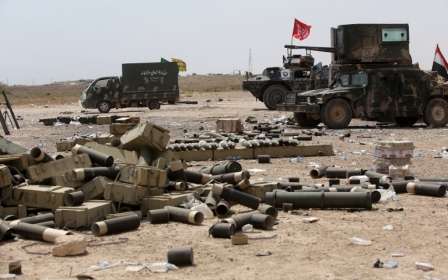