Assad vows to retake all of Syria, as senior rebel groups reject truce 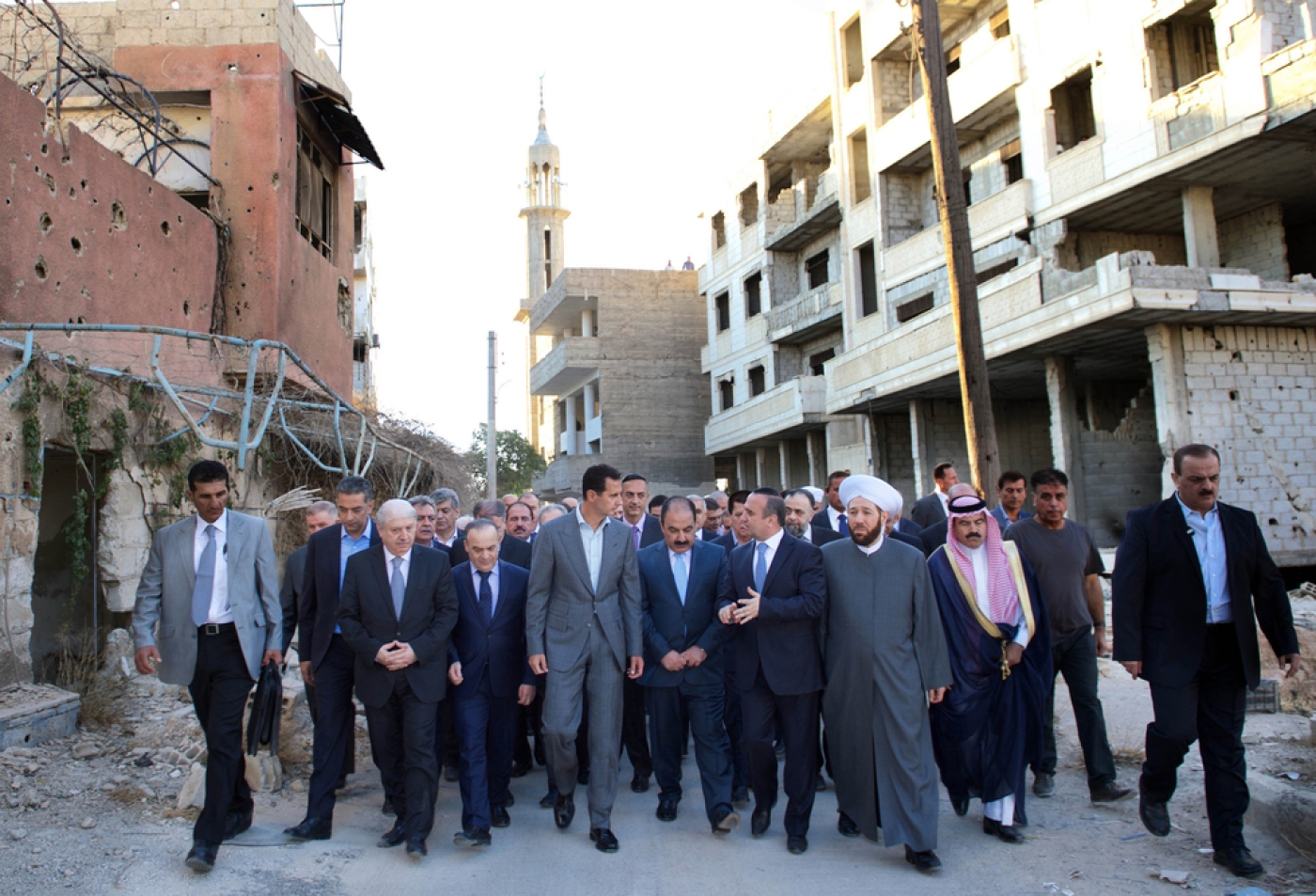 Syria's President Bashar al-Assad vowed to retake all of Syria from "terrorists", hours before a truce brokered by Russia and the United States was due to take hold on Monday.

Speaking in Daraya, a former rebel stronghold recently surrendered to the government, Assad said "the Syrian state is determined to recover every area from the terrorists", state media reported.

"The armed forces are continuing their work, relentlessly and without hesitation, regardless of internal or external circumstances," he said.

Assad made a rare public appearance to celebrate the Muslim Eid al-Adha holiday in Daraya, where state media showed him attending prayers at the Saad Bin Moaz mosque.

After years of government siege and fighting, its remaining residents and rebel fighters evacuated the town in late August under a deal with the regime, which has since retaken control.

"After five years, some people still haven't woken up from their fantasies," Assad said, referring to the anti-government protests that erupted in Syria in 2011.

"Some were betting on promises from foreign powers, which will result in nothing," he added.

Assad was joined at the prayers by a number of members of his ruling Baath party as well as several ministers and members of parliament.

The mufti, or Muslim cleric, presiding over the prayers, hailed Daraya as an example for Syria, which has been ravaged by conflict for five years.

"Daraya is living proof for all Syrians that the only option available to you is reconciliation and abandoning fighting," said Adnan al-Afiyuni, mufti for Damascus province.

Rebel fighters said they had been forced to agree the deal with the government after the siege created a humanitarian crisis for Daraya's remaining residents.

However some groups have rejected the deal.

Ahrar al-Sham on Sunday rejected the truce deal sayingin a statement on YouTube that the deal would only serve to "reinforce" the Assad government and "increase the suffering" of civilians.

Ahrar al-Sham, which has an influential presence on the ground in Syria's brutal war, is the first rebel group to officially react to the deal reached on Friday following marathon talks in Geneva.

"The people cannot accept half-solutions," the group's deputy leader Ali al-Omar said in the video to mark the start of Eid al-Adha on Monday, when the truce is due to come into force.

"The Russian-American deal... will send all the sacrifices and gains of our people who have risen up into smoke. It will only serve to reinforce the regime and surround the revolution militarily," he says.

Omar also rejected the aspect of the deal in which Washington is supposed to convince mainstream opposition fighters to break their alliance with Fateh al-Sham, the group formerly known as Al-Nusra Front and linked to Al-Qaeda. That group, which is not covered by the truce deal, has also dismissed the accord.

"The negotiations and the deals which do not take account of fighters on the ground are useless."

More than 290,000 people have been killed and more than half the population displaced since the conflict began.

As part of the complex agreement, a seven-day pause in the fighting would begin on Monday evening, the beginning of the Muslim holiday of Eid al-Adha. During that time, the Syrian army would relax its stranglehold on rebel-held areas of Aleppo, allowing humanitarian aid to be delivered to the starving city, while rebels would stop fighting around government areas.

The Syrian regime would suspend airstrikes, the main cause of civilian deaths, on rebel-held areas around the country.

The complex deal, arrived at by US secretary of state John Kerry and Russia's foreign minister Sergei Lavrov, envisages an initial ceasefire to allow humanitarian aid into besieged enclaves. If the deal holds for a week the Pentagon and Russia's military would start planning joint air operations against hardline groups. However there are no monitors to the truce on the ground and no penalties for any side that might violate it.