PM attacked at ceremony to mark anniversary of massacre of 8,000 Muslims by Bosnian Serb forces in July 1995 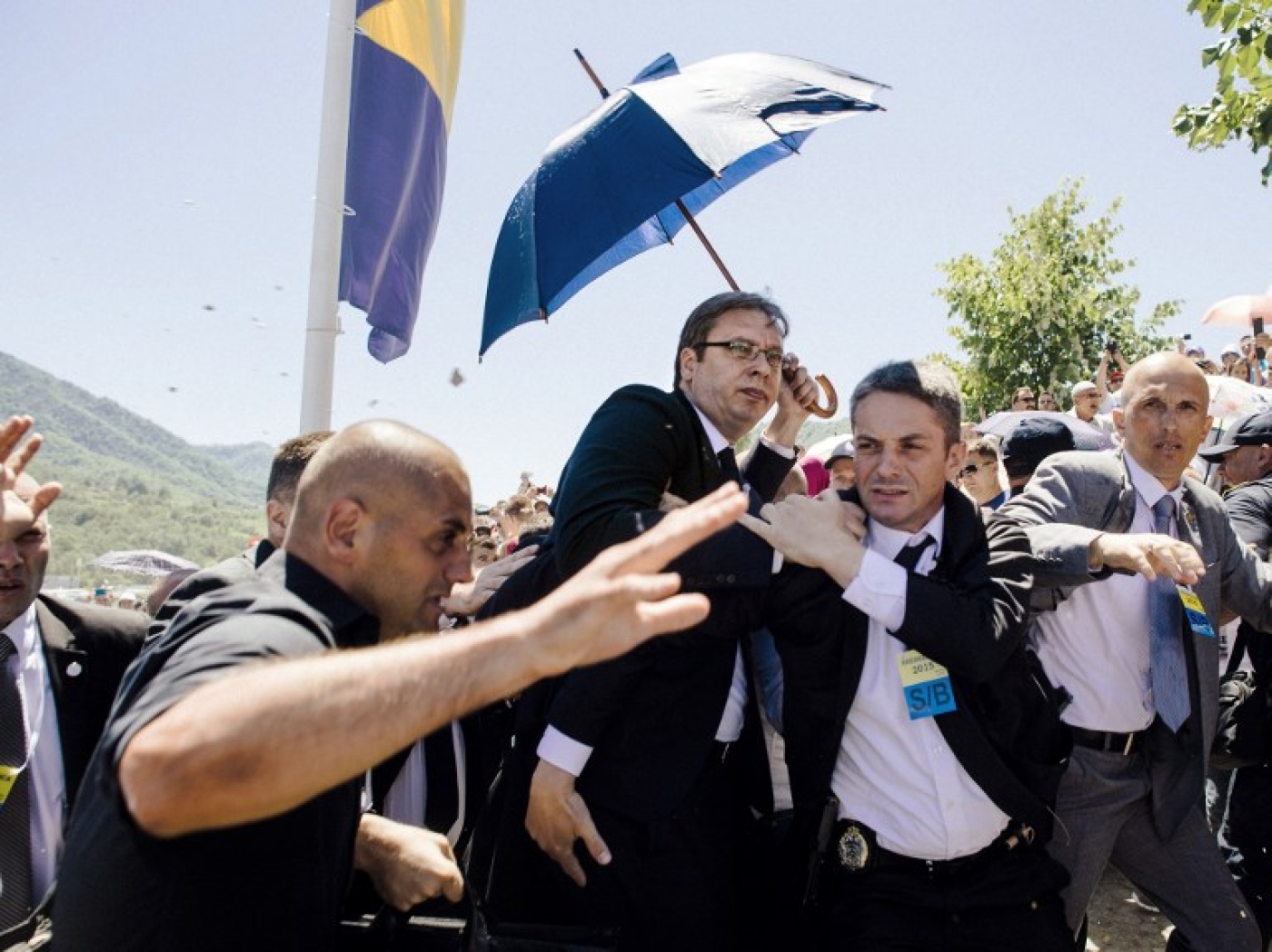 An angry crowd hurling stones and plastic bottles forced Serbia's premier to flee a ceremony on Saturday marking the 20th anniversary of the Srebrenica massacre of some 8,000 Muslims in Bosnia, Europe's worst atrocity since World War II.

Prime Minister Aleksandar Vucic had just laid a flower at a monument for the Bosnian Muslim men and boys killed and buried there when the crowd started chanting 'Allahu Akbar' (God Is Great) and throwing stones.

Vucic ran for cover shielded with umbrellas by his bodyguards who were hit by the hail of stones as the crowd also shouted insults at the Serbian leader.

Vucic, whose country backed Bosnian Serbs during and after the 1990s inter-ethnic war in Bosnia, was among numerous dignitaries, including former US president Bill Clinton, and tens of thousands of people attending the commemoration in the eastern Bosnian town.

The prayers of an imam finally calmed the irate people in the crowd of mourners as their attention turned to the burial of newly identified massacre victims.

Vucic had earlier condemned the "monstrous crime" in Srebrenica, where some 8,000 Muslim males were murdered by Bosnian Serb forces who had captured Srebrenica in July 1995, near the end of Bosnia's war.

Serbia quickly reacted to the incident, calling it an attack against the country.

"It is an attack not only against Vucic but against all of Serbia and its policy of peace and regional cooperation," Foreign Minister Ivica Dacic said in a statement.

Srebrenica Mayor Camil Durakovic condemned the attack, saying: "This is the work of sick minds who abused this solemn event." He added that Vucic had "tried to show compassion with our sadness and suffering".

Vucic returned to Belgrade where media had reported he was injured in the incident, but he told reporters that, although a stone hit him in the mouth, he was not hurt, while his eyeglasses fell and broke.

"I regret that some did not recognise our sincere intention to build a sincere friendship between Serbs and Bosniaks (Muslims)," he said of the incident, adding: "My hand remains outstretched (to Bosnian Muslims) and I will continue with my policy of reconciliation" between the two Balkan nations.

Serbian and Bosnian Serb politicians have long denied the extent of the killing in Srebrenica, although two international tribunals have described the bloodshed as genocide - a massive killing not seen since the German Nazi regime and its concentration camps during World War II.

In 1995, Srebrenica was supposedly a UN-protected "safe haven", but the Bosnian Serb forces led by Ratko Mladic, on trial for war crimes in The Hague, brushed aside the lightly armed Dutch UN peacekeepers.

The slaughter was followed a few months later by the Dayton peace deal, brokered by the Clinton administration, which ended the 1992-95 conflict that claimed some 100,000 lives.

US President Barack Obama spoke of the need for "healing the wounds of the past" in a statement on the Srebrenica anniversary, saying that "only by fully acknowledging the past can we achieve a future of true and lasting reconciliation".

On Saturday, the remains of 136 newly identified victims were laid to rest alongside more than 6,000 others already buried at a memorial centre just outside the town of Srebrenica.

In most cases only body parts of the Srebrenica victims have been found, as their bones were moved from mass graves to so-called "secondary" graves in a bid to hide the scale of the atrocity.

Begajeta Salihovic came to bury her father, whose remains were found in two such sites.

"His skeleton is still not complete, but we decided to bury him since we want to give him a trace," said Salihovic, 51, whose brother was also killed in the massacre. Her two other brothers were killed at the start of the war, but their remains were never found.

Kadira Salkic lost her three sons and husband in the ill-fated town.

"Only God knows how I manage to continue to live ... I still cry," the 75-year-old whispered.

"But there is nothing I can do. Even if I would die it would not make them come back."

Although the atrocity occurred 20 years ago, debate continues to rage over its description as genocide.

In 2005, then-Serbian president Boris Tadic attended ceremonies marking the massacre's 10th anniversary, becoming the first leader from his country to visit the site.

Then in 2010, the Serbian parliament condemned the massacre, and three years later Serbian President Tomislav Nikolic made a personal apology.

But all of Serbia's leaders, including Vucic, a former ultranationalist-turned-pro-European, have refused to acknowledge the massacre as genocide.

Earlier this week, Western powers clashed with Russia on the topic when Moscow - after lobbying by Serbia and Bosnian Serbs - vetoed a draft UN resolution submitted by Britain that called for the Security Council to recognise the mass killing as genocide.