Baghdad, a fog of threats and nerves ahead of Kurdish referendum Baghdad is talking up economic sanctions and military intervention as Iraqi lawmakers become increasingly nervous ahead of the Kurdish independence referendum.

Iraqi Prime Minister Haider al-Abadi cancelled his planned visit to the annual General Assembly of the United Nations in New York on Tuesday, expressing concern about what he termed the "critical situation".

And Iraqi Shia lawmakers have renewed their claim that Baghdad may resort to tough measures, depending which way the vote swings on 25 September.

Key Iraqi politicians and parties, including Abadi, have been in constant contact with Turkey, Iran, Syria and Saudi Arabia as well as representatives of the US, UK, France and the UN secretary general, all of whom strongly oppose the referendum. 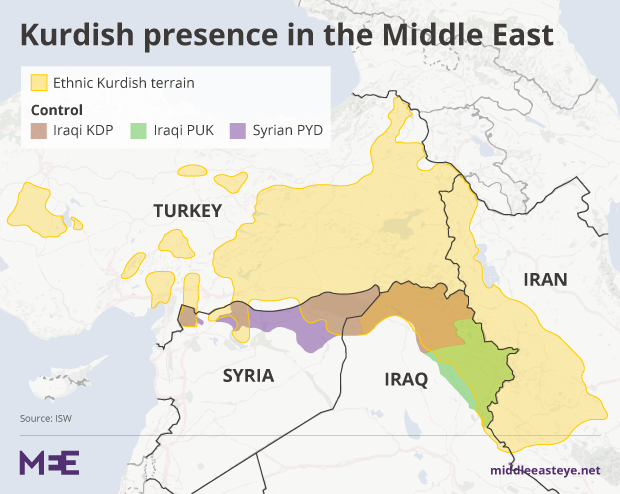 Kurdistan has existed as a semi-autonomous region since 1991, with growing autonomy over its own affairs. While Kurdish lawmakers are an essential partner in Iraq’s power-sharing agreement - of which they have been a part along with Shia and Sunni politicians since 2003 - many are still keen to establish their own state.

But Shia politicians, who dominate the Iraqi government and parliament, fear a yes vote will only encourage other political forces to demand autonomy, reject the constitution and rebel against central government.

'It encourages the separation of and rebellion against the constitution'

Ali al-Alaq, a Shia lawmaker and one of Abadi’s advisers, told MEE: "This [vote] will be a source of great damage for the political system… it encourages the separation of and rebellion against the constitution.”

On Monday, Iraq’s Supreme Federal Court ordered the suspension of the vote until its legality can be clarified, after complaints from Abadi among others.

But while the order bears legal weight, it cannot be implemented in practice in the Kurdish region, which has its own police and government.

The National Alliance is Baghdad's biggest parliamentary bloc, it includes most of the Shia political parties and supports the Iraqi government.

Late on Tuesday, its leaders called for the referendum to be cancelled on the grounds that it was unconstitutional and had no foundation in law.

Any negotiations, they said, "should be based on the constitution. No timetables and no unconstitutional guarantees.”

Shia politicians regard military action as one of several “strategic cards” which Baghdad might play if the autonomous Kurdish region votes yes.

Abbas al-Biyati, a Shia lawmaker and member of the National Alliance, told MEE that the government has a wide choice of peaceful options, believes in dialogue and will work with regional, neighbouring and international partners to prevent the vote.

He added: “Baghdad will not stand idly by. This issue affects the unity of the country and threatens the internal and regional security in the region.”

Other National Alliance leaders who spoke to MEE said that if Kurdistan “moved on”, then they would consider other options.

"The government has more than six strategic cards,” Fadi al-Shimari, a leader of Ammar al-Hakim's Al-Hekma political party told MEE. "These cards are strong and would abort any future attempts to separate or unilaterally declare a state.”

Baghdad, backed by the Shia alliance, has already begun to prepare to put pressure on Kurdistan, members of the Shia Alliance told MEE, although they declined to divulge any details.

But action could include hindering oil exports, closing the border posts of Kurdistan, cancelling federal support for Kurdistan airports, preventing international airlines from running flights to and across Kurdistan and restricting the movement of Kurdish politicians and officials, according to Shia lawmakers and members of the National Alliance who spoke to MEE.

"There will be big consequences for this [vote]. Kurdistan will be at risk," Alaq, said.

Kirkuk: Heart of the storm?

For his part, Massoud Barzani, president of Iraqi Kurdistan, has deployed additional troops in the southern and northern entrances to Kirkuk over the last few days, local security sources told MEE, as part of a high overall security alert.

A curfew was imposed late on Monday, the security sources added, after armed clashes inside Kirkuk between Kurds on one side and Turkmen and Arabs on the other. One Kurd was killed and two Turkmen wounded in the fighting.

'Kirkuk is a barrel of TNT, we should all work to cool it and defuse it. It is a very sensitive and dangerous city, filled with many internal and external complications'

Bayati said: "Kirkuk is a barrel of TNT, we should all work to cool it and defuse it. It is a very sensitive and dangerous city, filled with many internal and external complications. All sides need to be keen to keep it calm.”

One senior Shia lawmaker close to Abadi, who declined to be identified, told MEE: "Changes could happen in the next 48 hours."

Abadi and many Shia leaders now expect the worst of scenarios: "We are afraid that if Barzani fails to hold the referendum, then he will create a mess and trouble in Kirkuk and, at the end of the day, may seize it through military force. In this case, Abadi would have to go with the military option, albeit on a limited scale.” 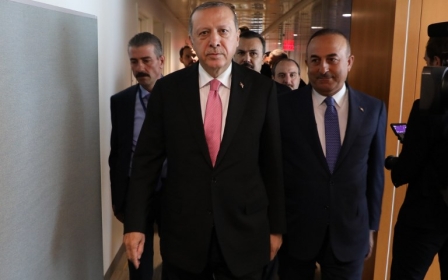