A militant group in Bahrain has claimed an attack on police officers in the town of Bani Jamra in the north, as Bahraini authorities continue to suppress opposition groups in the country.

The group, calling itself the "Martyr al-Nimr Battalion" - presumably named after the Shia Saudi cleric executed by Saudi Arabia in January - appear to mark the rare emergence of an armed group among anti-government forces in the tiny Gulf Kingdom.

"The Mujahideen in the battalion of martyr al-Nimr were able to target al-Khalifa mercenaries near Bani Jamra with the suitable weaponry," said the group in a statement released on Sunday, referring to the ruling al-Khalifa monarchy.

The group said the attack came in response to action by the authorities - largely made up of Sunnis - to suppress Shia religious imagery during celebration of the Islamic Muharram festival.

"This operation is a condemnation and a response to the blatant violations by al-Khalifa mercenaries to remove the Husseini banners and degrading its holiness and infringements of the Husseini rituals."

The group also claimed responsibility for an earlier attack in the coastal village of Karbabad on 22 September, which led to a number of injuries and an increased security presence in the area.

It was not possible to independently verify the group's claims.

Demonstrations against the ruling Khalifa monarchy have been on-going since 2011, with the government resorting to increasingly oppressive measures to quell dissent.

So far, demonstrations have been largely peaceful, apart from improvised projectiles like Molotov cocktails and paving stones.

The emergence of an armed militant group follows the dissolution of the largest legal opposition group, Al-Wefaq, and the continuing refusal by the authorities to release the organisation's leader Ali Salman.

On Monday, Bahrain's top court rejected an appeal by Salman, who is currently serving a nine-year jail term on charges of inciting "hatred" and forceful regime change.

He was originally sentenced in July 2015 to four years in jail, but the appeals court in May more than doubled his jail term to nine years after reversing an earlier acquittal on charges of "crimes of promoting change to the political system by force".

The court of cassation set 17 October as a new date to examine Salman's sentence.

The Bahraini government has repeatedly claimed that Iran has been funnelling support to the opposition in Bahrain, which is overwhelmingly made up of Shias who have long complained of discrimination under minority Sunni rule.

In June, Bahraini authorities claimed they had dismantled a militant cell which had received backing from Iran and Iraq. The same month, a car bomb exploded killing one woman in the capital Manama.

Two men were later arrested for the bombing, with the Interior Ministry accusing Iran of providing the men with training and resources.

Since then, Bahrain has taken steps that activists have described as a renewed crackdown, including re-arresting prominent human rights activist Nabeel Rajab and stripping the leading Shia cleric Isa Qassim of his citizenship. 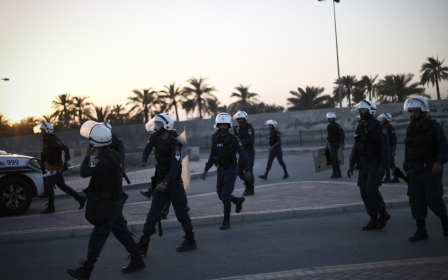