The Balkan mine trap awaiting refugees 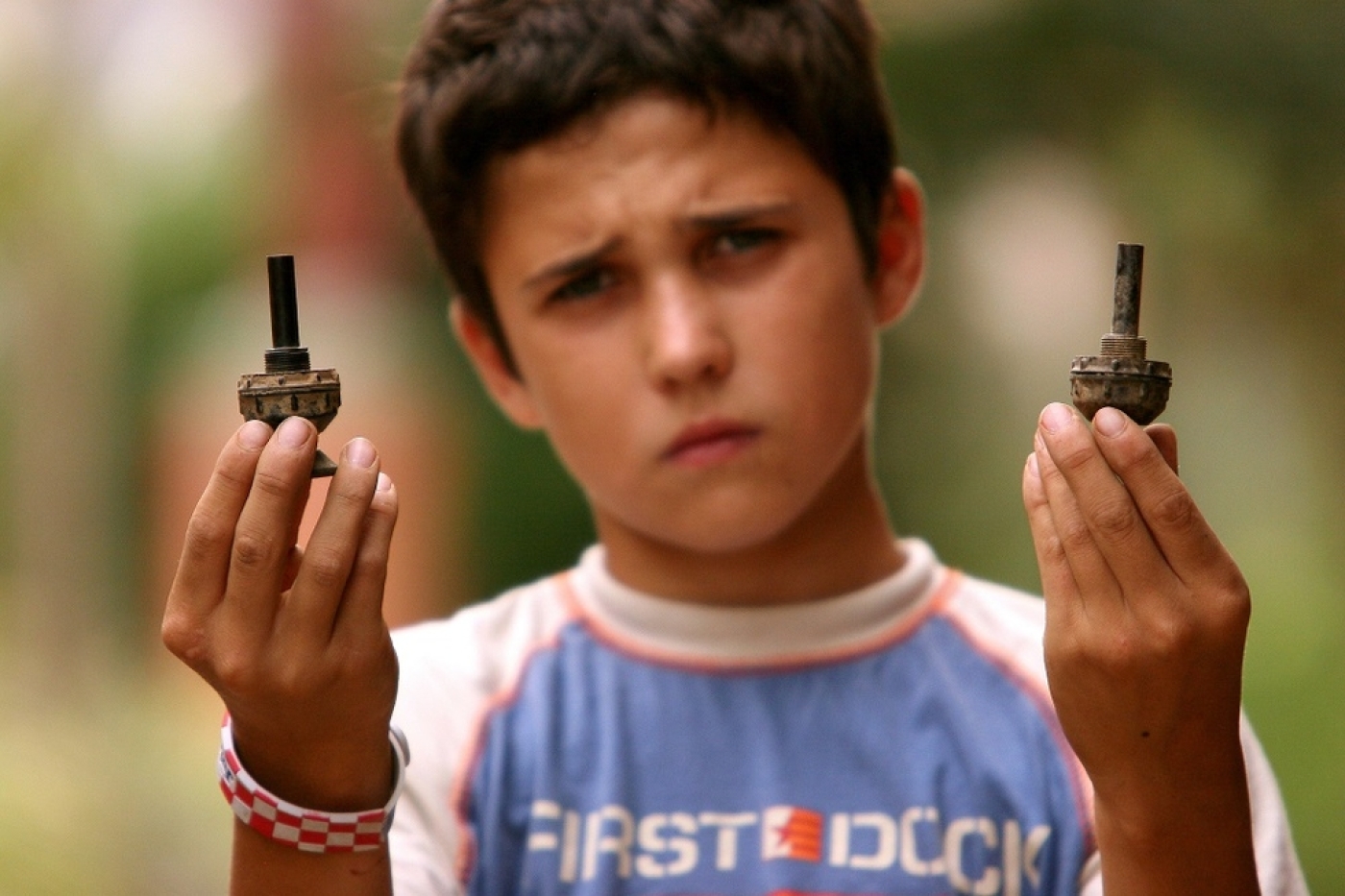 A Croatian boy holds pieces of a mine found in his home, very close to the Serbian border (AFP)
By
Simona Sikimic

The changing route of migration in the Balkans is putting refugees at risk of coming increasingly close to mine fields scattered throughout the region.

Mine fields, left over from the Yugoslav Wars in the 1990s, litter not only the Croatia–Serbia border, but parts of southern Serbia and much of Bosnia and Herzegovina.

Overall around 750 square kilometres are still suspected to be filled with unexploded ordinance in the ex-Yugoslavia – some 50,000 in Croatia and up to 120,000 in Bosnia, according to the Bosnia and Herzegovina Mine Action Centre.

The issue first attracted international attention on Wednesday when scores of refugees began to enter Croatia from Serbia for the first time, but the refugee influx to the EU over recent months had already prompted emergency mine clearance work in Serbia and Bosnia.

At the start of the month, Norwegian People’s Aid (NPA) sent emergency teams into southern Serbia to speed up mine demarcation and clearance and also to spread awareness about the mines, giving out leaflets in Arabic and English to warn those coming in. The organisation also says it was thinking about how its action in Bosnia will be impacted by a possible influx of migrants and refugees there.

While the migration issue is not new, Darvin Lisica, the regional director of Norwegian People’s Aid for South Eastern Europe, told Middle East Eye that the crossings are getting increasingly erratic. Before, people largely came by road or used smugglers to help them. But since this summer, as increasing numbers of people have come, they are now using illicit routes that put them in greater danger.

“We can see that the routes are changing very quickly indeed,” Lisica said. “We saw this very clearly earlier this week when [early on Tuesday] Hungary closed the border. People changed their routes and suddenly we saw thousands of people head to the Croatian border where there are un-cleared mine fields.”

The fields in Croatia are marked, although there is still great concern that people – especially those crossing at night or in a hurry - will not be able to see the signs.

However, the situation in Serbia and especially in Bosnia - where mines have been left in a much more ad hoc manner and cover between two to three percent of the total surface area - is much more precarious. 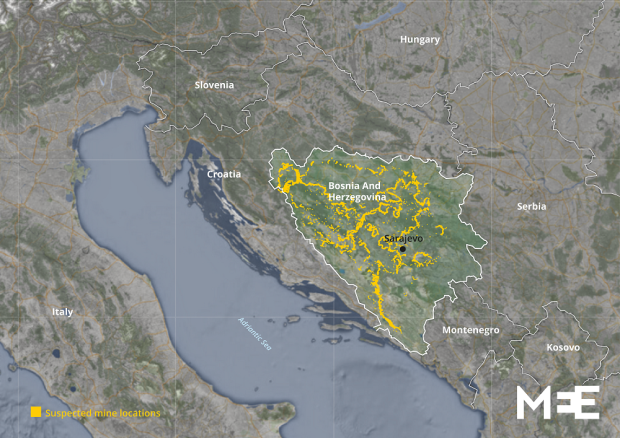 Serbia has already seen more than 120,000 refugees and migrants – mainly from the Middle East - cross through this year. Until recently, 35,000 were still estimated to be there and more are coming in from Macedonia. Very few have so far reached Bosnia, but several aid groups told MEE that they expected that refugees could enter soon and had been preparing for their arrival.

In Serbia, near the border with Kosovo, there are unmarked and unknown fields which were left by Serbian paramilitary groups in the late 1990s as the tensions with ethnic Albanians intensified. No records on their locations were kept.

Further complicating the picture is the existence of NATO cluster munitions that were dropped on Serbia during the 1999 NATO bombing campaign aimed at stopping Serbian aggression in Kosovo.

In 2008, 111 countries agreed to make them illegal under international law, but these deadly and indiscriminate weapons have never been fully cleared. The Action Mine Centre for Serbia said that cluster munitions can still be found in an area around 6 square kilometres – about the size of Gibraltar.

While locals tend to know areas to avoid, few migrants and refugees are even aware that there is a danger.

“Some, but not all, of the people we meet who are coming in know there was a war, but they very rarely think that there might be mines here,” Lisica said.

“These things are unfortunately not taken seriously until someone dies, and when someone is killed, it is too late.”

In Croatia, officials estimate that since the beginning of the Balkan wars in 1991, about 2,500 people have died from land mines, and some 500 since. In Bosnia, the number is even bigger and more than 8,000 people have died, including 1,732 who have been killed since the war ended in late 1995.

“That is a lot of deaths for a country where there is peace and the conflict ended more than 20 years ago,” Lisica said. 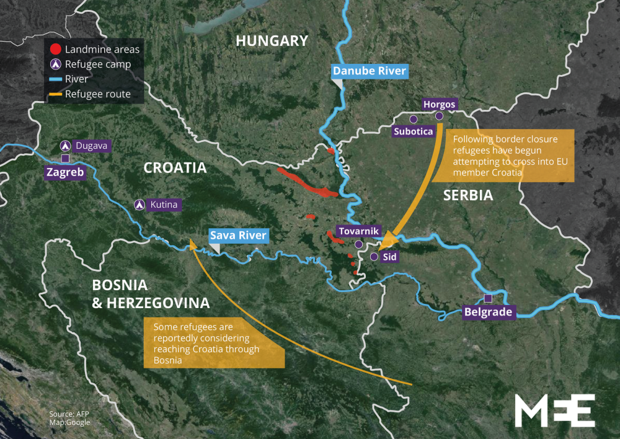 The problem, according to Adam Komorowski, the commercial director at UK-based Mines Advisory Group, is that while there was a lot of initial interest and international assistance for mine clearance, this waned once high-risk areas where civilians tended to go were demarked and cleared.

But the "refugee crisis has put them back into play as a serious issue because people are likely to take much more risk,” Komorowski told MEE. “So suddenly they are being brought back into the spotlight.”

Nor are these the first minefields Syrian refugees would have encountered on their way to Europe where they hope to be granted asylum in places like Germany and Sweden.

Large parts of the Syria–Turkey border are also lined with mines that have never been cleared.

“There are 100,000s of mines literally stretching the length of that border,” said Komorowski. “The Syrian war has held up progress in clearing that and there have been reports that more mines were now being added.”

De-mining teams in the Balkans said they are monitoring the situation very closely and pouring in extra resources to ensure migrants and refugees stay safe, but their work is being frustrated by the constant shifting of the migration patterns.

“The situation is changing very quickly, almost every day,” a spokesperson for the Red Cross in Serbia told MEE. “It can be difficult to know where people will be and where they will set up camps.”

NPA’s Lisica said his teams have to constantly carry out analyses on “micro-locations” just to keep up to speed.

With the Hungarian-Serbian border looking like it will remain closed, and the Serbia-Croatia border now closed as well, a wider shift is expected over the coming weeks as new arrivals in Greece seek out alternative routes to the wealthier EU states.

Threats from the Hungarian Prime Minister Viktor Orban that his country would soon start to build a fence on parts of its border with Croatia – after it completes construction on its border with Serbia and Croatia – will also likely only lead to people seeking out fresh options.

The coming winter, which sees temperatures readily fall well below freezing in much of the Balkans, is also expected to shift migration patterns.

NPA’s Lisica said he believes that the migration route will soon shift closer to the coasts where the weather is milder. This will bring more uncertainty and a fresh set of challenges.

“We all have to work together because this is a regional problem – it is not just Serbia’s – we all have to realise that [the refugee influx] will impact the whole of South East Europe and is not going to end any time soon.”