Fadwa Barghouti,the wife of Marwan, writes to Catholic church head urging intervention 'before it is too late' Palestinians walk past a poster of Marwan Barghouti (AFP)
By
AFP

The wife of the leader of a hunger strike by hundreds of Palestinian prisoners in Israeli jails has written to Pope Francis calling on him to intervene "before it is too late".

Fadwa Barghouti, wife of Palestinian leader and prominent prisoner Marwan Barghouti, has called on the pope to "speak up, because freedom and dignity are God-given rights, and no human group should deprive another of these rights."

"Your call for respect of the rights of the Palestinian people, including the rights of our political prisoners, would allow the voice of those placed in isolation to reach the world," the letter says.

The Vatican has recognised Palestine as a state.

The hunger strike began on 17 April, led by Barghouti, who is serving five life sentences over his role in the second Palestinian intifada.

Israeli authorities say 894 Palestinian prisoners have kept up the strike, though Palestinian officials say it is more than 1,000.

Some 6,500 Palestinians are currently detained by Israel for a range of offences and alleged crimes.

Around 500 are being held under Israel's system of administrative detention, which allows for imprisonment without charge.

Palestinian prisoners have mounted repeated hunger strikes, but rarely on such a scale.

Israel has vowed not to negotiate with the hunger strikers, with Public Security Minister Gilad Erdan calling them "terrorists and incarcerated murderers".

In her letter, Fadwa Barghouti said: "The Israeli courts are instruments of oppression not justice, especially Israeli military courts with their conviction rate of 90 percent to 99 percent for Palestinians."

Marwan Barghouti, called the "Palestinian Mandela" by supporters, is a popular figure among Palestinians.

The European Parliament has called for his release, saying he could potentially help peace efforts.

While many Palestinians view him as a hero, Israelis point to the bloody suicide attacks of the second intifada of 2000-2005 and his role in that uprising. 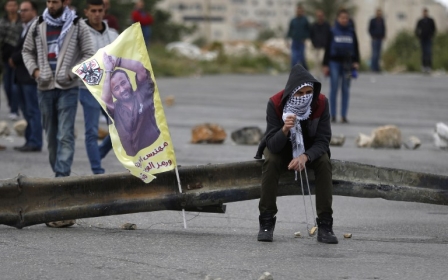