Battle for US Republican Party on full display at national convention

While some members of GOP elite have decided to sit this convention out, far-right religious populists are filling the void CLEVELAND, United States - The mood outside Cleveland’s Quicken Loans Arena after the news of Donald Trump’s confirmation as the Republican nominee for the presidential race is at once apocalyptic and carnivalesque. It has been that way for the past two days as the influx of prophesiers and Trump paraphernalia salespeople have descended upon this Midwestern town.

A women is solemnly calling on all sinners to repent. It is not clear if she is herself a Trump supporter, or if she sees the latest developments in the GOP as a sign that the end of time is drawing nigh.

“It was the day when it became incontrovertibly clear that a distinguished political party has fallen into the grip of a vulgar demagogue with a thuggish retinue,” conservative political commentator Bill Kristol wrote on Monday night, after the Republican National Convention (RNC) began.

Many of the Republican elite are taking a similar line. Away from the convention, high-level secret meetings have been held in private rooms and restaurants in Cleveland among those plotting to regain control of their party. Politico dubbed these meetings a shadow convention.

Regardless, Trump campaign chair Paul Manafort declared on Wednesday: "This is the Trump party now."

"He's the nominee of the party, Republicans have said 'We trust you to lead us this fall and we think you're the strongest candidate and you have the best vision,'" Manafort told CBS.

Meanwhile, outside the RNC, an Abraham Lincoln lookalike tells Middle East Eye that Trump is not his first choice, but “he’s still representing the party I founded”.

Eventually the doomsday preaching is upstaged by three men with bigger signs and louder acoustics, who call passing women “sodomites”.

“Fear Him Who Has Power to Cast You Into Hell,” reads one of their signs, while another warns that the Catholic pope is, in fact, the antichrist.

With some of the GOP elite sitting this RNC out, the vacuum has been filled by the evangelical crowd. Trump is hardly a likely figure - he has been married three times, had a child out of wedlock and stumbles when trying to make even the most basic reference to the Bible. Yet under his watch, Evangelicals have increased their influence in the party.

Fundamentalist religious messages are overwhelming at this year’s RNC. A van decked in giant images of a mangled foetus is endlessly looping around central Cleveland. Another advertises: “For the wages of Sin is Death,” with “SODOMY” “AIDS” and “THE LAW” in aggressive capitals.

It’s not only religious folks who are happy with the GOP’s drift into out-and-out populism.

Michael Rine is a truck driver from Taylor Mill, Kentucky. Long-haired, bearded and wearing black jeans and a red baseball cap, he told MEE this is his first RNC.

The three issues that drive Rine’s support for Trump, he said, are border security, protection of the right to bear arms and creating more jobs.

Unemployment is high in his home state of Kentucky, he says bitterly, especially if you count in those forced to work two jobs because of low wages.

Rine believes Trump has broken taboos by speaking about these issues.

“Trump is like a giant cheerleader who others can get in behind,” he said.

He told MEE that the moment he went from being a passive, even dubious, supporter to becoming completely on board with Trump was when he saw news reports in early June showing Latino Americans burning the US flag during an anti-Trump demonstration in San Jose, California.

“That’s when I went out and brought the hat and the pens,” he said.

Like the majority of those here, he says he gets his news from Fox TV almost exclusively.

For other longstanding Republican voters, however, all the machismo is more of a turnoff.

“I can tell you, this is the craziest presidential race I’ve ever seen, and I lived through Nixon,” a Cleveland waitress named Shelly told MEE, shaking her head. “And I’m a Republican.”

Like most of the locals, she said she was keeping well away from the convention area this week.

Yet Trump’s upheaval of the Republican Party status quo is winning over other supporters.

Clifford Khouri is a Cleveland businessman out celebrating Trump’s nomination in a bar. He is also a lukewarm conservative. He has never been a member of the Republican Party, does not like the party’s elite and describes himself as an independent.

He is excited at the idea that Trump is an “outsider”. Khouri is American-born, but parents migrated to the US from Lebanon. Another major drawcard for Trump, in his view, is that he has promised not to engage in faraway wars.

“Bush’s biggest mistake was the entire destabilisation of the Middle East,” he said.

“The value of the consultants and the lobbyists in Washington is going to go right down if this guy gets elected,” he said, with a broad grin. “How will they trade on influence? He’s going to shake things right up. That’s why the Republicans don’t like him either.”

Accidental or not, Trump’s great skill has been empowering and mobilising the party’s disaffected grassroots members, instilling in them a sense of rebellion. He has taken the presidential nomination, and now the real war for the party’s soul is about to begin. 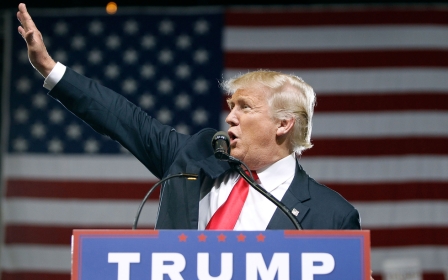