As Lebanon reels from a massive explosion in its capital's port, speculation over its causes has been rife 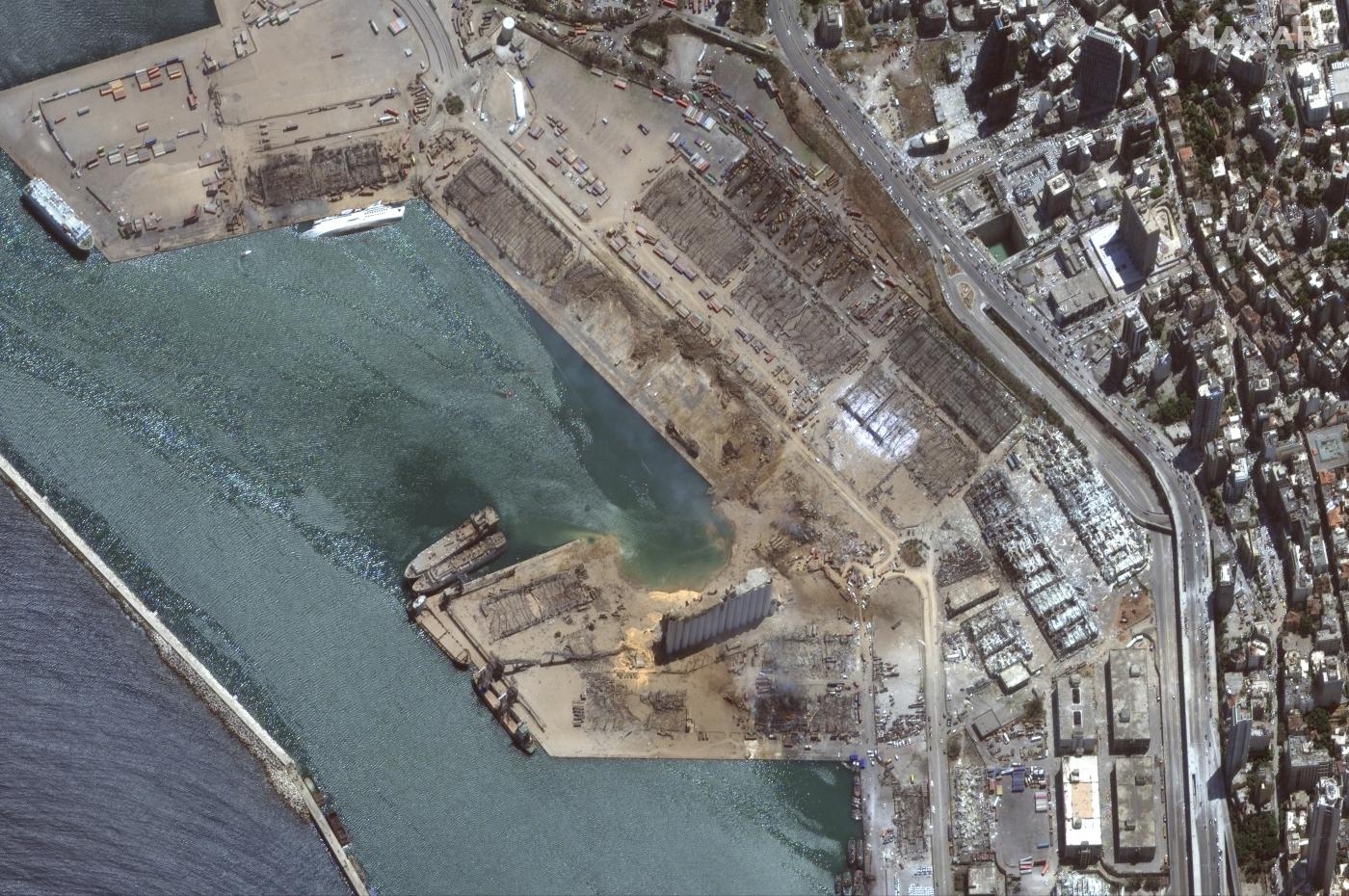 Since Tuesday's explosion brought death and destruction to Lebanon's capital, Beirut, social media has been awash with speculation and conspiracy theories over the source of the huge blast.

The Lebanese government has so far indicated that it was caused by 2,700 tonnes of the chemical compound ammonium nitrate, which had been left lying in a warehouse in Beirut’s port since 2013.

Many are unconvinced by the official narrative and have offered alternative explanations.

Middle East Eye looks at five of the most common theories that have emerged, and what we know so far about their likelihood.

Several social media users were quick to pin blame on Israel for the attack, with some citing comments by Prime Minister Benjamin Netanyahu shortly before the blast.

Tweet of Israel's P.M.
before #BeirutBlast
Something is wrong 🤔 pic.twitter.com/PBJbEpvrGI

After touring a military base in the Israeli city of Ramle on Tuesday, Netanyahu warned: “We hit a cell and now we hit the dispatchers. We will do what is necessary in order to defend ourselves. I suggest to all of them, including Hezbollah, to consider this.”

The PM was referring to the Israeli army, claiming to have thwarted a Syrian government attack along the border in the occupied Golan Heights on Monday, targeting four people who had apparently planted explosives.

“These are not vain words; they have the weight of the State of Israel and the IDF behind them and this should be taken seriously,” he tweeted.

The comments came as tensions had risen in the area after a Hezbollah fighter was killed in an apparent Israeli strike on the edge of Damascus.

Despite the timing of Netanyahu’s tweet, there is little evidence to suggest Israel was targeting Hezbollah in Beirut.

An Israeli military source denied carrying out the attack, stating that it was “not a security-related event”.

Israeli military sources tell Israeli 10 News reporter: Israel didn't bomb Beirut. The explosion did not occur in a Hezbollah weapons depot. This was not a security-related event. https://t.co/hgDXFVxZdH

Iran, an enemy of the state of Israel, is also thought to have ruled out Tel Aviv's involvement.

Israel announced that it had offered medical and humanitarian aid to Lebanon, and Tel Aviv’s municipal building will light up on Wednesday evening in solidarity with victims of the explosion.

The offer to help has been criticised by some observers as “propaganda”.

Israel has invaded, bombed and violated Lebanese airspace and maritime waters on countless occasions over many years now, killing vast numbers of Lebanese civilians in the process. Tel Aviv’s ‘offer’ to ‘help’ Lebanon is crude and sickening Israeli propaganda. #BeirutBlast

While some theorised that Israel carried out the attack in order to target Hezbollah, others speculated that the Lebanese group itself may have played a role.

A 2017 video of Hezbollah’s Secretary General Hassan Nasrallah threatening to attack Israel’s Haifa port, in which he speaks of the "nuclear-like" explosion caused by ammonium nitrate, was widely shared.

Others re-posted a tweet from the Israeli army purportedly showing the location of an Iranian and Hezbollah "missile project".

Despite these videos and images resurfacing, Lebanese officials have maintained that the site of the blast was a warehouse storing confiscated materiel, with no suggestion that it was a Hezbollah depot.

Although the full details of the incident are yet to emerge, it is widely believed the blast was a result of an accident involving highly explosive materials.

However, scores of people have speculated it was a bomb targeting Lebanon's capital.

Among those suggesting a deliberate attack may have been carried out was US President Donald Trump.

"I met with some of our great generals and they just seem to feel that it was, this was not some kind of a manufacturing explosion type of event,” he said to reporters on Tuesday.

“This seems to be, according to them, they would know better than I would, but they seem to think it was [an] attack."

The Trump administration offered no further explanation about the apparent "attack" and did not respond to Middle East Eye’s request for comment.

Some on social media posted videos and images of black objects flying near the blast site to suggest a missile may have been involved.

Most of these posts were ridiculed, as other users pointed out that the supposed objects were mostly likely to be birds.

Chris Palmer, a former ESPN journalist with more than 100k followers on Twitter, claimed the mushroom-like cloud of smoke which formed after the blast meant it was an “atomic bomb”. The tweet was later deleted.

Jeffrey Lewis, a missile expert at the Middlebury Institute of International Studies, dismissed that theory in comments to online publisher Vice.

“Those of us who study nuclear weapons can explain over and over again until we are blue in the face that this looks nothing like a nuclear explosion,” Lewis said.

“People are seizing on the ‘mushroom cloud’, which you see in all kinds of explosions. There are none of the phenomena we would expect to see and the coloration is all wrong.”

A prominent UK left-wing activist, Aaron Bastani, claimed the blast was caused by a thermobaric weapon, which uses oxygen from the blast zone to generate a high-temperature explosion.

Thermobaric weapons were used by the UK and US in Afghanistan, and by the Syrian government against rebel forces in the western city of Qusayr in 2013.

Bastani deleted the tweet, and the theory has been widely condemned.

It's actually the Russians who use thermobaric weapons more 'liberally than anyone' (they even developed a handheld version) - not the Israelis/Americans as he seems to be implying.

And no, it looks nothing like a 'thermobaric weapon' pic.twitter.com/sgQhf2CZLQ

On Tuesday, Abbas Ibrahim, Lebanon’s head of General Security, said “the explosion took place in a warehouse of high-explosive material confiscated for years”.

This has led to theories and rumours about from whom the explosive substance was confiscated.

Some Twitter users have pointed the finger at a supposed Turkish shipment headed for Syria.

Translation: Construction: The materials that caused the explosion: sodium nitrate seized from a ship carrying ammunition from Turkey to terrorist groups in Syria

This theory has been proven to be false.

At the time, the shipping monitoring organisation ShipArrested.com reported that "upon inspection of the vessel by Port State Control, the vessel was forbidden from sailing”.

“Most crew except the master and four crew members were repatriated and shortly afterwards the vessel was abandoned by her owners after charterers and cargo concern lost interest in the cargo."

After footage of the first blast emerged, several people were quick to notice firework-like sparks going off simultaneously, shortly before the second blast.

3rd video from another angle. Initial reports that explosion occurred due to accidental fire break in fireworks cache #Lebanon #Beirutpic.twitter.com/1WnCO6N0HI

“Talking about fireworks is ridiculous, there is no fireworks but high-explosive materials,” Ibrahim said on Tuesday.

Since then, however, Lebanese authorities have suggested fireworks may well have been stored near the ammonium nitrate.

Director General of Lebanese Customs asked whether fireworks were stored near ammonium nitrate:

His answer: Most probably, this was the case.

Every single politician in Lebanon is responsible for this. Your corruption and incompetence is killing us. @akhbar https://t.co/3dYNixwFfu

Boaz Hayoun, owner of the Tamar Group, an Israeli firm that works closely with the Israeli government on safety and certification issues involving explosives, said that fireworks were likely involved.

“This is very specific behaviour of fireworks; the visuals, the sounds and the transformation from a slow burn to a massive explosion.” 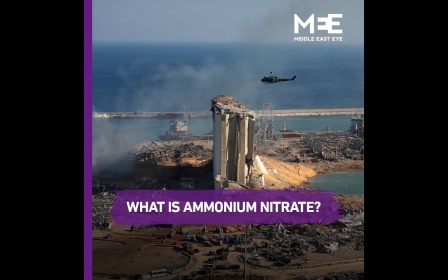