Belgium has arrested six people on suspicion of planning an attack on New Year's Eve, following a series of raids in which weapons and communications equipment were seized.

The mayor of Brussels announced on Wednesday that the city was cancelling its annual New Year's Eve party and fireworks for security reasons, with the Belgian capital remaining on high alert over a possible terrorism threat.

"Unfortunately we have been forced to cancel the fireworks and all that was planned for tomorrow evening ... following a risk analysis by the crisis centre," Yvan Mayeur told broadcaster RTBF.

"That would have brought a lot of people together in the centre of Brussels."

Mayeur said in the current circumstances it wasn't possible to "guarantee that we can check everyone coming to the event... it's better not to take any risks".

On Thursday morning six people were detained following raids at seven locations across the city. Police confiscated computer equipment, mobile phones and material relating to a type of airgun.

On the same day a judge ruled that two Belgian nationals arrested earlier this week may be held in custody for another month on charges of threatening to carry out a terrorist attack.

The men were named by the AFP news agency as Said Saouti, 30, and Mohammed Karay, 27, on information provided by their lawyers.

Belgium has been on high alert since the attacks by the Islamic State group on Paris last month, which killed 130 people.
Members of the group based themselves in Brussels and travelled from the city to carry out their assault in the French capital. Belgium has staged dozens of anti-terrorism raids in the aftermath.

A key suspect in the Paris attacks, Belgian-born fugitive Salah Abdeslam, is believed to have fled to Brussels in the hours after the massacre, which was claimed by the Islamic State jihadist group.

The Belgian authorities have so far detained nine men in the case including four accused of helping Abdeslam get away from the crime scenes. 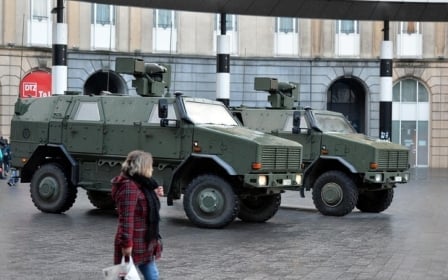