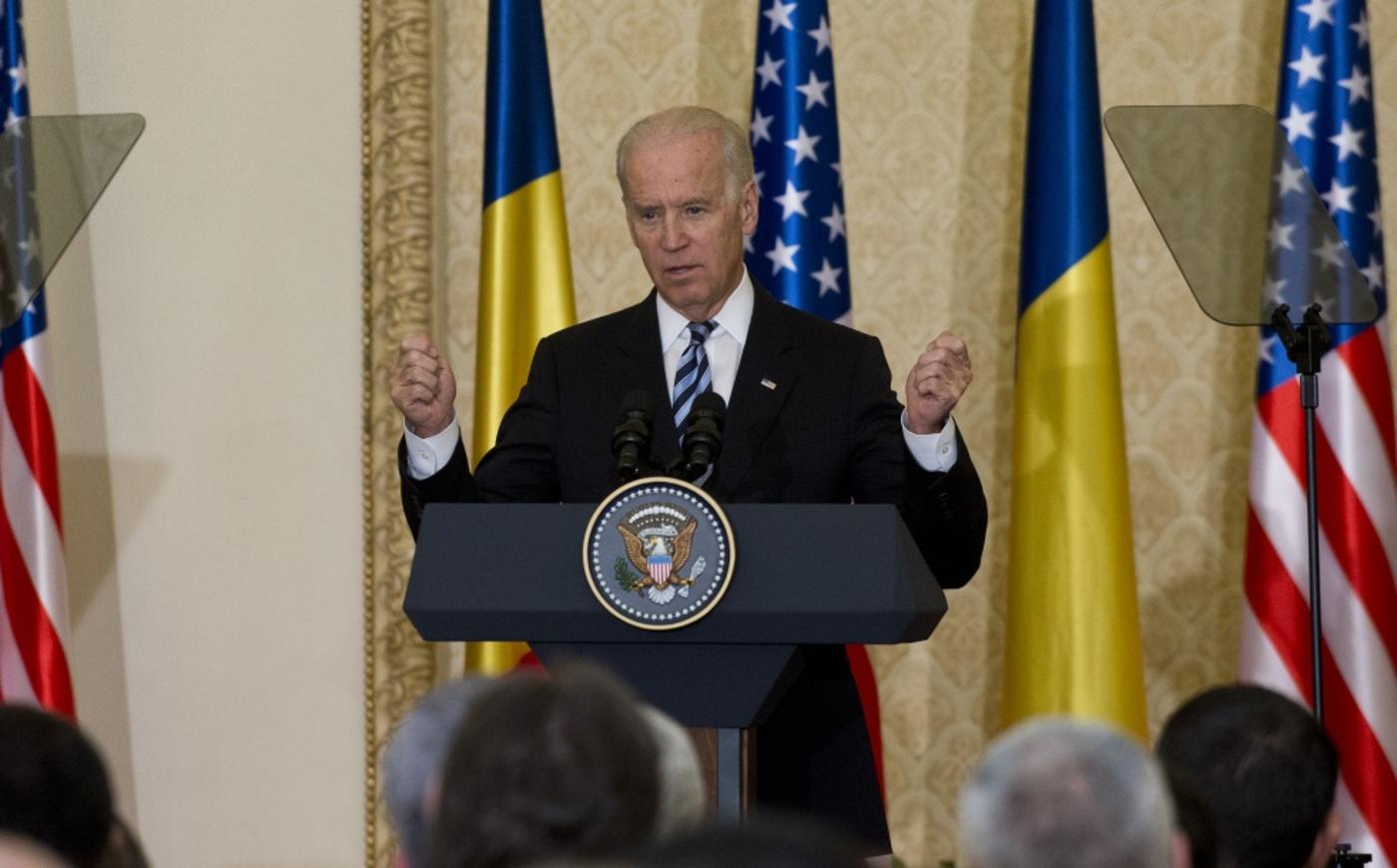 US Vice President Joe Biden arrived in Cyprus on Wednesday for talks aimed at trying to promote a peace deal on the divided island that would release its untapped gas deposits as a substitute for European reliance on Russian energy.

The length of the visit is a surprise. The first American vice-president to travel to Cyprus since 1962, Biden will stay for as much as three days.

Little progress has been made since Greek Cypriot and Turkish Cypriot negotiators resumed peace talks in February after decades of failure.   The main mediator is the United Nations and although Washington can exert powerful influence on both sides, it is far too early for Biden to be able to broker concessions at this stage, analysts say.

They believe the real reason for his extended stay is Washington’s desire to accelerate a deal on exploiting Cyprus’s Aphrodite gas field and ensure that the main customer is Europe via a pipeline to Turkey.  He will press both sides to understand that no investment will come unless a peace deal is secure.

Cypriot President Nicos Anastasiades told reporters on a state visit to Berlin last week “Cyprus should be developed into an energy centre that helps to reduce other dependencies”.  White House officials echoed his point in a conference call with journalists before the Biden visit:  “The discovery of hydrocarbons could position Cyprus, we believe, as an energy and economic leader in the region”.

Gas fields were discovered in deep water off the island’s southern coast in 2011 but the size of the deposits is disputed with estimates ranging from 60 trn to as low as 3.6 trn cubic feet.   It is also undecided whether the gas would be best exploited via the fixed infrastructure of an undersea pipeline or by building a liquefied natural gas plant in Cyprus which would have the flexibility of allowing tankers to load up and supply markets anywhere in the world.   LNG plants are very expensive and Cyprus’s Aphrodite field does not have enough deposits to make this method of marketing profitable.

Cyprus signed a deal with the French company Total at the end of last year for an LNG plant to be built in Cyprus.   But the condition was that more gas deposits would first have to be discovered beyond the Aphrodite field. Another option under discussion is that Israel’s recently discovered off-shore gas fields could use an LNG plant in Cyprus.

Some analysts argue that an underwater pipeline from Israel to Turkey would be a good solution as it would pass close to Cyprus.

Turkey’s relations with Israel have improved in recent months after Israel apologised for attacking the Mavi Marmara relief ship for Gaza in 2010.   “If the Cyprus issue is solved, Aphrodite’s gas could be added to the pipeline”, Mehmet Ogutcu, chairman of the London-based consultancy, Global Resources Corporation told Middle East Eye on Tuesday.  Three Turkish companies have formed a consortium and are already negotiating to buy Israeli gas.

“One problem is whether the Turkish government will give the go-ahead.  The other is whether Cyprus will allow the pipeline through its Exclusive Economic Zone.  US involvement is critical because time is critical.  There is a narrow window of opportunity”, Ogutcu added.  East Mediterranean gas would lose its significance since there will soon be an oversupply of gas worldwide.

Turkey insists the two sides in Cyprus must agree on a formula for ensuring the island’s oil and gas wealth is shared with the Turkish residents of Northern Cyprus.   It refuses to accept that islands have continental shelves and opposes the Cyprus government making energy deals with foreign firms without a comprehensive peace deal.  Turkey has threatened to use its navy against oil and gas rigs if no compromise is found to resolve the dispute.

The island was divided after Turkish troops invaded exactly 40 years ago this summer, leading to a mass exodus of around 190,000 Greek Cypriots living in Kyrenia and other northern towns and villages.  Some 55,000 Turks left the southern part of the island.  The Turkish Cypriot entity is only recognised by Turkey.

After decades of tension, a re-unification plan for a bizonal and bicommunal federation was negotiated by former UN secretary general Kofi Annan.   In 2002 Turkish Cypriots overwhelmingly voted to accept it but a similar referendum on the Greek Cypriot side was defeated.   Since then no serious progress towards negotiating a new deal has been achieved in spite of occasional statements of optimism from one or other of the sides.

Biden has agreed to cross into the Turkish Cypriot entity tomorrow to meet its leader Dervis Eroglu in his residence.    Greek Cypriot opposition parties have criticised the move for “upgrading” the entity’s international status but the US has won guarantees that no flags or other symbols of sovereignty will be displayed.

In spite of such protocol spats, tension between the two parts of Cyprus is substantially less since the Turks proposed an opening of the border between the North and the South in 2004, which the Cyprus government accepted.

In the capital Nicosia, Cypriots and foreign tourists can walk across the “Green Line” patrolled by bored-looking UN police,  stopping only for a few minutes to show their passports or ID cards.    There are several vehicle crossing points where formalities are equally simple and holidaymakers arriving at Larnaca airport in the south can be in northern Cyprus within an hour, or they can fly to Ercan airport in the north via a brief stop-over in Turkey.

Since being elected last year Anastasiades has used his strongly pro-American position  (his predecessor was a communist) to persuade Washington to support the idea of confidence-building measures by the Turkish side to kick-start the peace process.   The main one being proposed is the handing-back of the ghost town of Varosha, which lies on the Turkish side next to the ancient city of Famagusta.

Before the 1974 war the town was a beach resort with casinos.   Now it lies looted and abandoned behind coils of razor-wire.  Green tarpaulin sheets partially block the view but travellers who go up to these barriers can glimpse the holes made by artillery shells and machine-gun fire on the facades of what were once hotels and luxury flats.

Most other property owned by Greeks in the north has been occupied by Turkish Cypriots or sold to Turks and other foreigners.   Varosha is an exception, a dead resort that no developer has wanted to take over.

Biden is expected to announce US funding for a master-plan for its development.    In his meeting with the Turkish Cypriot leader, Dervis Eroglu, he is likely to press for Varosha to be returned to the Greeks.

Turkish Cypriot leaders made a powerful gesture of goodwill at Easter.   They allowed Greeks to hold a Good Friday service in the large Ayios Giorgos Exorinos church in Famagusta.   Thousands of Greek Cypriots who used to live in the town crossed the border for what was the first worship to take place in the church for decades.

Turkish Cypriots leaders are unlikely to go further and give in to US urgings on Varosha.  Last week Turkey’s foreign minister, Ahmet Davutoglu, made a lighting visit to the north to agree a joint position on the Biden visit with Eroglu.   He described the vice-president’s trip as a “positive and important step” but said there would be no “big news” on Varosha.   He rejected any hand-over saying confidence-building measures  must be equitable and balanced.   If Varosha was to be discussed , then something of equal value would also have to be on the table from the Greek Cypriot side.  “Otherwise while increasing the confidence of one side you may reduce the confidence of the other,” Davutoglu said.

In a case that has been argues for several years the European Court of Human Rights last week ordered the Turkish government on to pay 90 million euros ($124 million) in compensation for human rights abuses committed during and after Turkey's invasion in 1974.   Davutoglu said the timing of the judgement, which Turkey will not accept, was aimed at undermining the peace drive on the island.