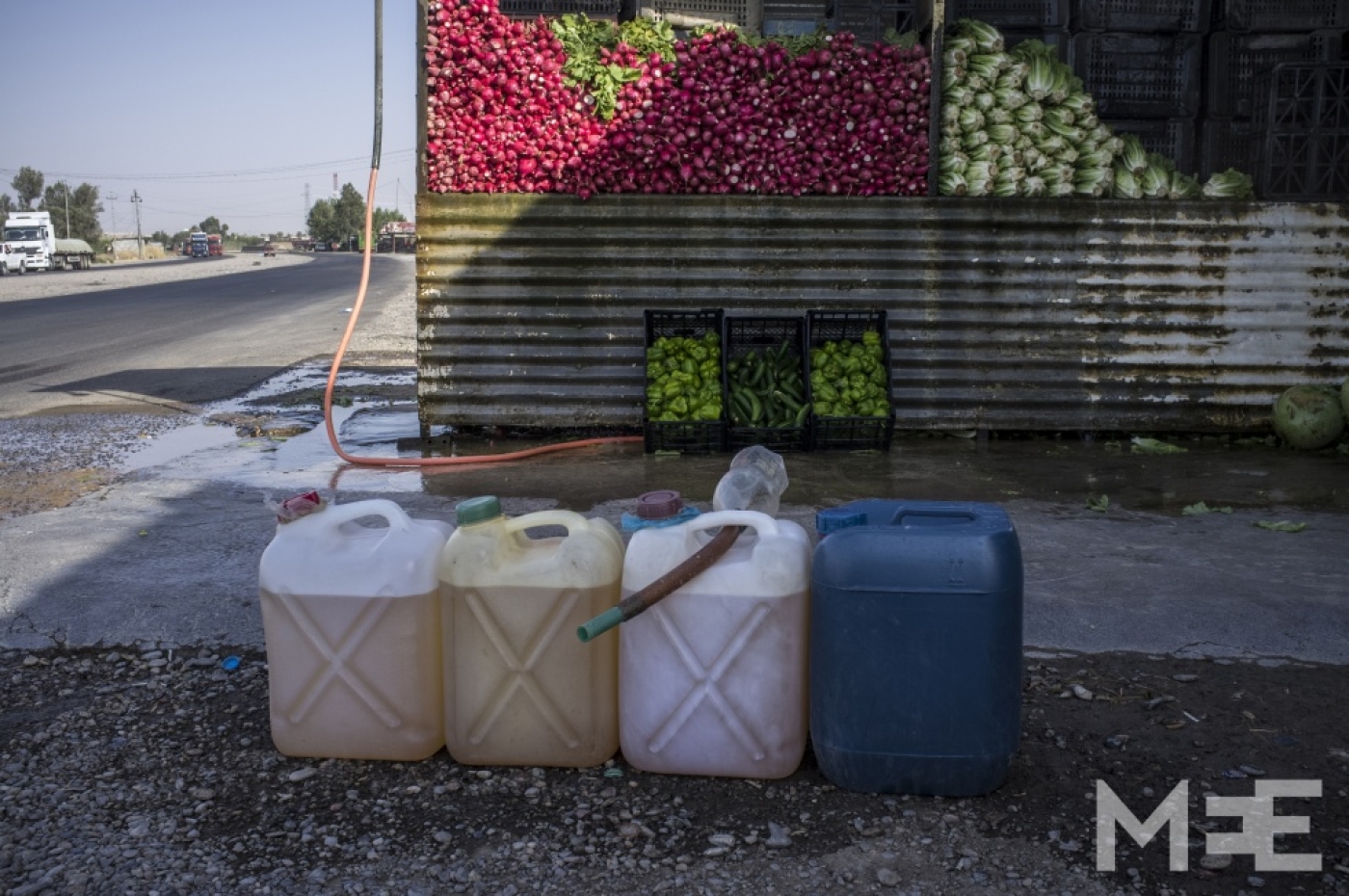 The price of oil, both legal and smuggled, has shot up as Iraqi's panic buy oil (Hannah Smith)
By
Hannah Smith

BARGHASH CROSSING, Iran-Iraq border - The road that winds east from Suleymaniyah to the Iranian border is steep, treacherous and slow, twisting along mountain sides and dotted with cedar trees, cutting through villages where life trundles along at a distinctively unhurried pace.

Few people in Iraq’s Kurdish region (KRG) would have reason to take the road to the Barghash border crossing, but for the past ten days this route has been unusually busy. Every day, dozens of tanker lorries wind their way down the mountains, bringing fuel that has been refined in Iran to the petrol stations of northern Iraq.

The KRG’s politicians are hoping that these Iranian imports can ease the fuel crisis that is gripping the country. The massive Baiji oil refinery, which supplies 60% of the KRG’s refined fuel, has been out of action for over a month. It is now part of the frontline between the beleaguered Iraqi National Army and the Sunni insurgents of the Islamic State (IS), who swept towards the facility just a few days after their breath taking blitzkrieg on Mosul.

An oil industry source told Middle East Eye that Baiji refinery has not been damaged - it is too valuable an asset for either the government forces or IS to destroy merely for the sake of controlling it – but all the employees have been evacuated and the Iraqi Army does not seem able to expel the militants.

The knock on effects of the battle for Baiji can be seen on the streets all around the KRG. The queues at the petrol stations have stretched for miles since the beginning of IS’ assault as people panic and buy. Two weeks ago the government issued fuel-rationing coupons in an attempt to quell the panic, but last Thursday (17 July) the stocks from Baiji finally ran out. Overnight, the packed petrol forecourts turned eerily empty.

In a northern suburb of Kirkuk, petrol station manager, Umid Hameed took his first consignments of Iranian fuel on the day after the Baiji fuel stocks ran dry. “I got a call two days ago from the Petrol Protection Distribution Centre (the government-run strategic petrol store),” he said. “They told me that the Iraqi petrol was about to run out.”

After the crisis started, Hameed was limited to just one tanker of Iraqi petrol per day. Now he is free to buy as much Iranian fuel as he likes - but for his customers, the price has shot up, almost tripling in a single day from 450 Iraqi dinars per litre to 1250 Iraqi dinars.

“My customers are going crazy, asking why the price is so high,” he said. “This is not a solution.”

Hameed’s station is not government owned, but he says that the KRG is now forcing him to buy Iranian petrol, using the gas that he also sells as a leveraging tool.

“The gas that we sell comes from the government,” he explained. “So they said that if I want to continue selling that, then I have to sell the Iranian oil too.”

A litre of fuel at the petrol station is now as expensive as it is on the black market, where even before the official imports started, many in the KRG were already buying Iranian fuel. It’s not hard to find vendors selling smuggled Iranian petrol - they are dotted along roadsides throughout the KRG, selling their wares in see through jerry cans that display the orange tinge that is distinctively Iranian. Since the start of the crisis, many drivers have preferred to take their chances with black market fuel than wait for hours at the petrol stations.

Eighteen year-old Shalaan, a stallholder who has dealt in more traditional (and legal) goods, such as cigarettes and watermelons for the past two years, said that he spotted a business opportunity in the growing petrol station queues.

“I have a friend who goes to the Iranian border to buy from the smugglers, and then I buy it from him,” he explained. “In the first days of the crisis we were selling lots - my best was around 100 jerry cans in one day.”

Back near the Barghash crossing, the line between the Iranian petrol that is smuggled and that which is imported legally is often blurred.

An Iranian tanker driver called Amir, who had just come across the border and was taking a tea break before continuing on his journey, told us that he sometimes uses his lorry to import fuel legally, and sometimes to bring in consignments on false paperwork.

Other drivers are in a far less fortunate position. Every spare space on the seven-kilometre stretch of road between the border crossing and the customs office is packed with stationary tankers.

A group of angry drivers gathered in a truckers’ café to air their grievances and explain why. “We have been here for ten days!” exclaimed a thick-set man with a heavy black moustache. “We have no place to shower or sleep, and we’re running out of money.”

The drivers said that they are all bringing refined Iranian petrol into northern Iraq, but have been left stranded because their bosses - the middlemen who buy the fuel from the Iranian refineries and then sell it on to the KRG - are withholding the paperwork that they need to pass through the customs point and deliver their cargo.

Some drivers, they said, were managing to get the paperwork and go through, but they had no idea why they are being kept in limbo.

“I think it is the merchants,” said one. “They are keeping as many of us here as possible so that there will be a fuel shortage in the cities and the price will go up.”

Another thought that the delay could be the result of corruption within the government. “The tankers that are going through belong to merchants who know people in the KRG,” he said.

Faced with an uncertain and uncomfortable wait, many of the drivers have simply parked up their cargo and gone home to wait for a phone call to tell them that they can move again.

At the edge of a dusty expanse of wasteland packed with tankers but empty of people, we found four young men sheltering from the afternoon sun in a makeshift shack. They told us that by day they are security guards, keeping watch on the thousands of litres of legal but marooned fuel to ensure that no-one tries to siphon it off. By night, they are smugglers, links in the chain that brings illegally imported fuel from the very same place to the very same customers.

“If you want, I can get you 1000 jerry cans tonight!” said one, as he explained how his contact on the other side of the border buys fuel from petrol stations in Iran and brings it over the mountain smuggling routes on donkeys. He buys the petrol for the equivalent of 400 Iraqi dinars per litre in Iran; by the time it reaches black market sellers like Shalaan, it costs 1200 dinars. For the customers in the KRG, the smuggled petrol costs 1250 dinars – exactly the same price as the legally imported Iranian fuel.

The smugglers have heard rumours, however, that the Iranian government is cracking down on the trade by limiting the amount that customers can buy at petrol stations near the border and increasing their patrols on the mountain frontier.

“Of course, that means that the price is going to go up,” said one. “But there’s no way to stop the smuggling – the situation creates the demand. Before Mosul, fuel in the KRG cost 500 dinar at the petrol stations, so who would have bought Iranian then?”

People in the KRG say that it stings to think that such an oil rich country as Iraq is now forced to import fuel - whether legally or illegally - from their neighbour. “When I see the lines of cars downtown, I can’t believe it,” said an oil engineer called Ahmed. “The Kirkuk oil field is 110km long, and 10-12km wide. It’s what we call a super-giant oil field. It’s unbelievable to think that we’re bringing petrol from Iran.”

Ahmed says that the problem is the lack of refineries: while the KRG is rich in oil, it has only two refineries in its territory, which together can provide just a third of the fuel that the region needs.

“It’s bad policies, bad arrangements,” he said. “The KRG spoke about building a new refinery in Kirkuk after 2003, but the Baghdad government always gave an excuse not to. And establishing a new refinery now will not be easy - it will take two to three years at least.”

At his petrol station in Kirkuk, Umid Hameed sees only one way out of the crisis. “The only solution is Baiji,” he says. “If we don’t get that functioning again, the crisis will continue.”