Britain, the Middle East and arms sales: A breakdown 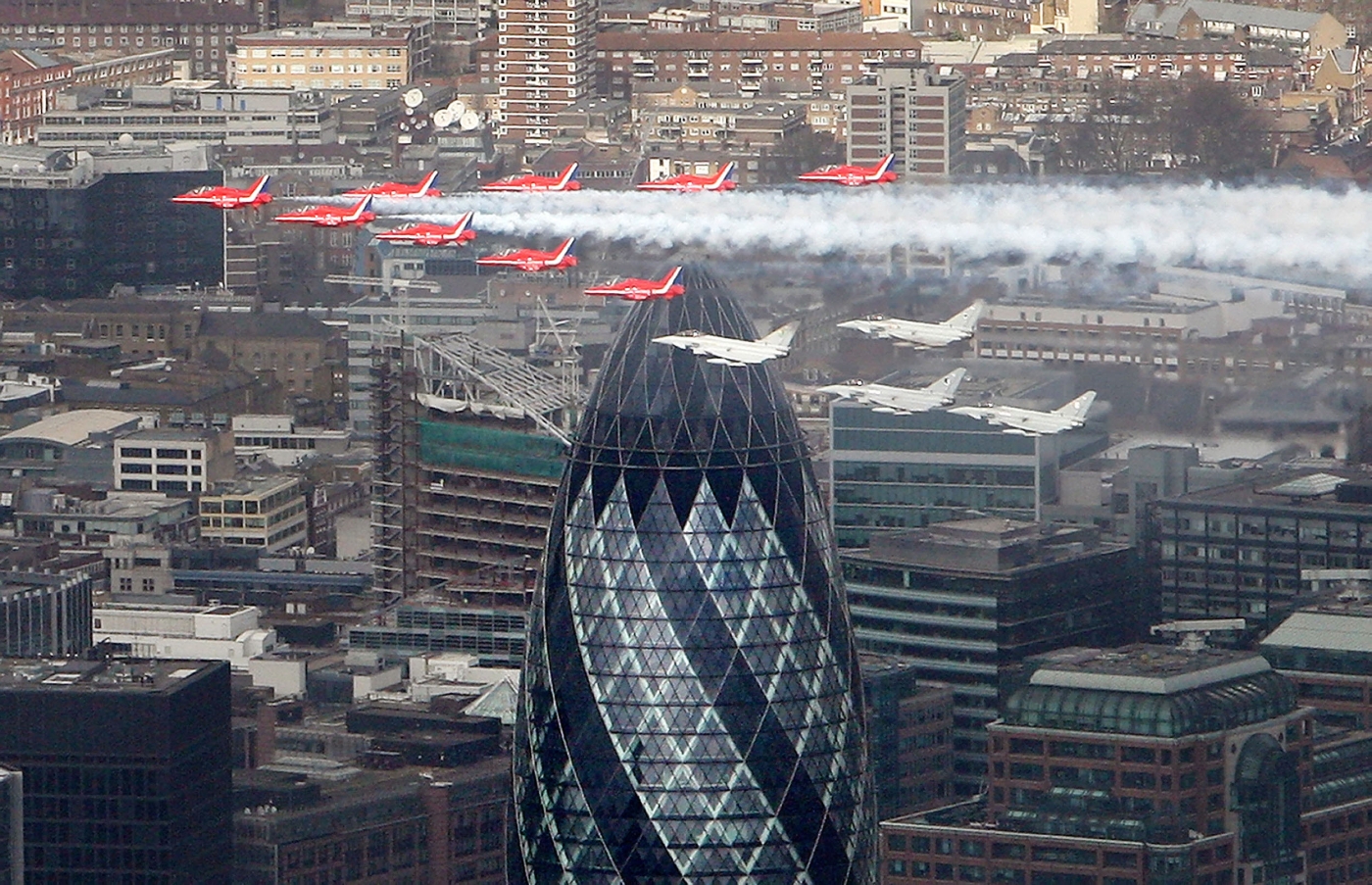 The UK government has sold Typhoon aircraft (pictured flying with Britain's Red Arrows) to Kuwait, Qatar, Oman and Saudi Arabia over the past decade (AFP/File photo)
By
Rayhan Uddin

New figures released by the British government have revealed the extent to which the Middle East dominates spending on both UK and global arms.

The data, published on Tuesday by the UK Department for International Trade, provided estimated figures on defence and security imports and exports between 2010 and 2019.

While the US and UK led the way on exports, countries from the Middle East, and in particular Saudi Arabia, were among the biggest buyers.

Middle East Eye breaks down what the figures say about the region's arms dealings.

Over the past decade, the Middle East has spent more on defence than any other region of the world. 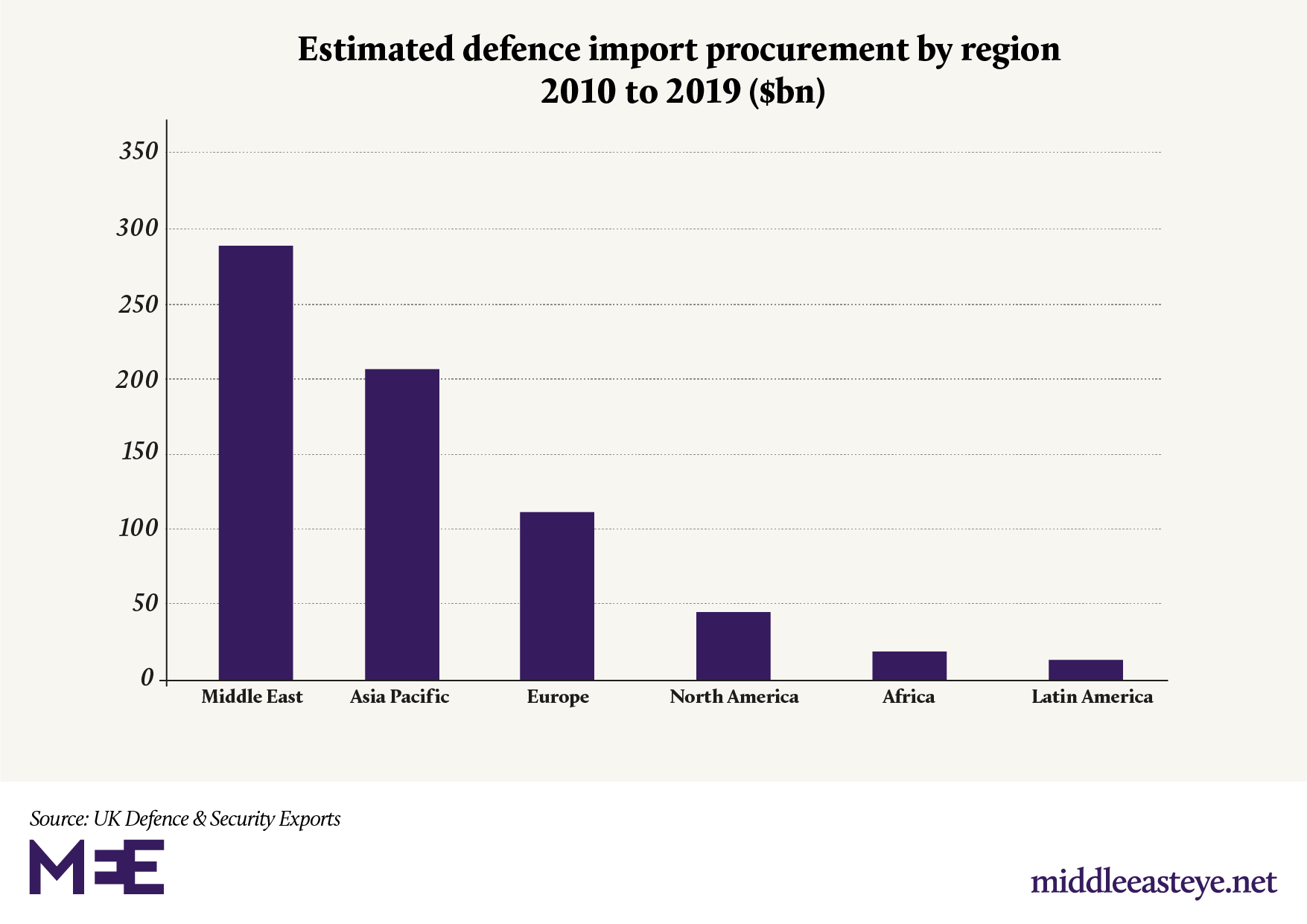 The second largest region was Asia Pacific, with $208bn purchased globally, followed by Europe, which spent $111bn over the past decade.

Saudi Arabia spends twice as much as anyone else

Saudi Arabia was confirmed as comfortably being the biggest defence spender of any single country in the past 10 years, having purchased $116bn worth of arms.

The next highest spender, India, spent nearly half that amount, at $60bn.

Riyadh’s regional Gulf rival Qatar closely follows in third place, with $57bn worth of contracts signed in the past decade.

Of the top 10 importers, five were from the Middle East, with the United Arab Emirates, Egypt and Kuwait joining Saudi Arabia and Qatar. Abu Dhabi spent $24bn, while Cairo and Kuwait City spent $22bn and $18bn, respectively.

Over half of British arms go to the Middle East

Of the UK’s $125bn defence exports since 2010, a staggering 60 percent of sales have been purchased by countries in the Middle East. 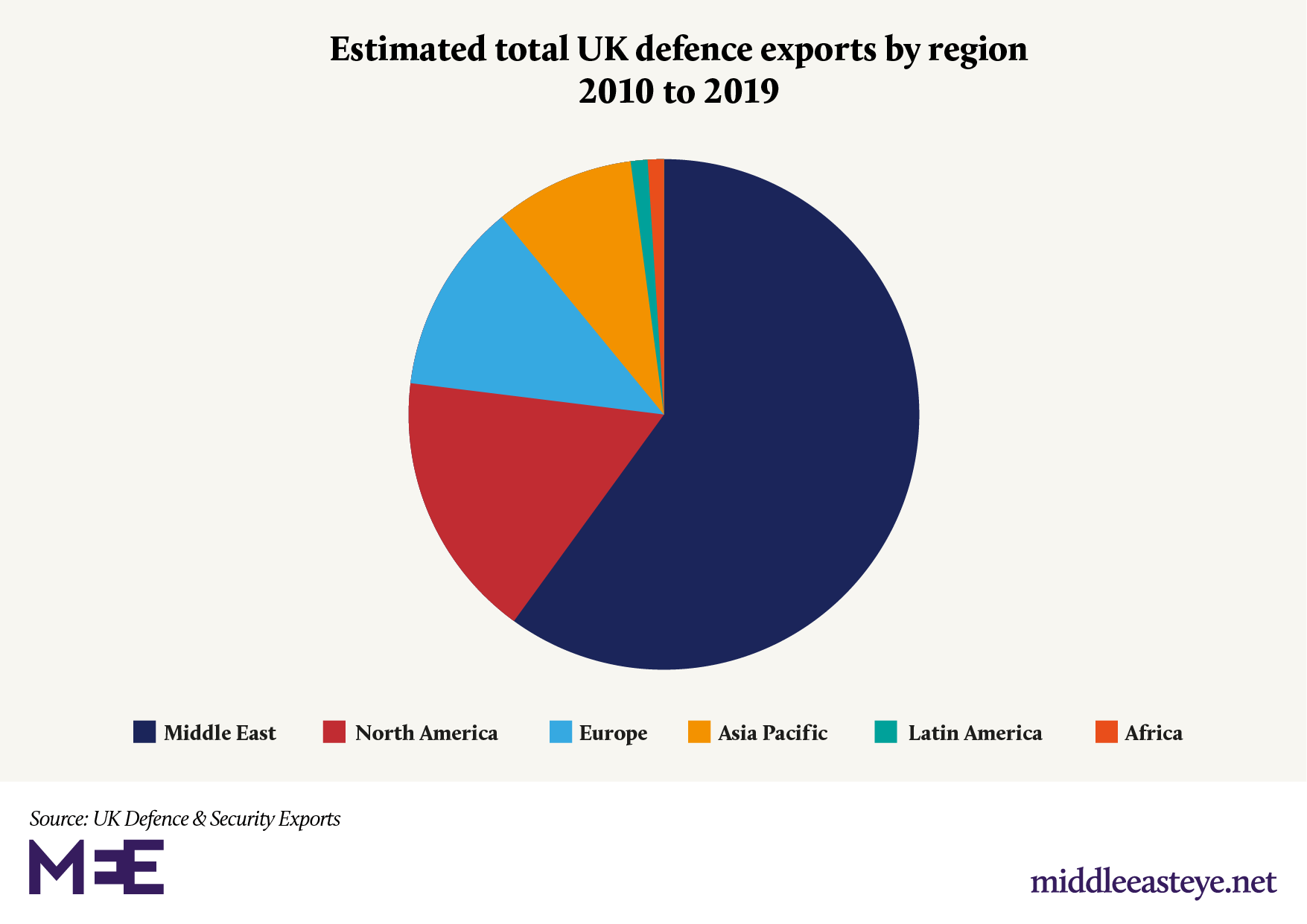 The second-highest region to purchase British arms was North America, amounting for 17 percent of sales.

The UK has won a significant amount of contracts in the Middle East over the past decade, including Typhoon aircrafts to Kuwait, Qatar, Oman and Saudi Arabia, in addition to Brimstone missiles purchased by Doha and Hawk aircrafts sold to Muscat.

Similar to the figure for the past decade, the Middle East made up 58 percent of the market share for UK defence exports in 2019.

The second largest importer was Europe, with a share of 20 percent.

Though British sales to the Middle East were significantly higher than to anywhere else in the world, the market share of the region fell from 77 percent last year. 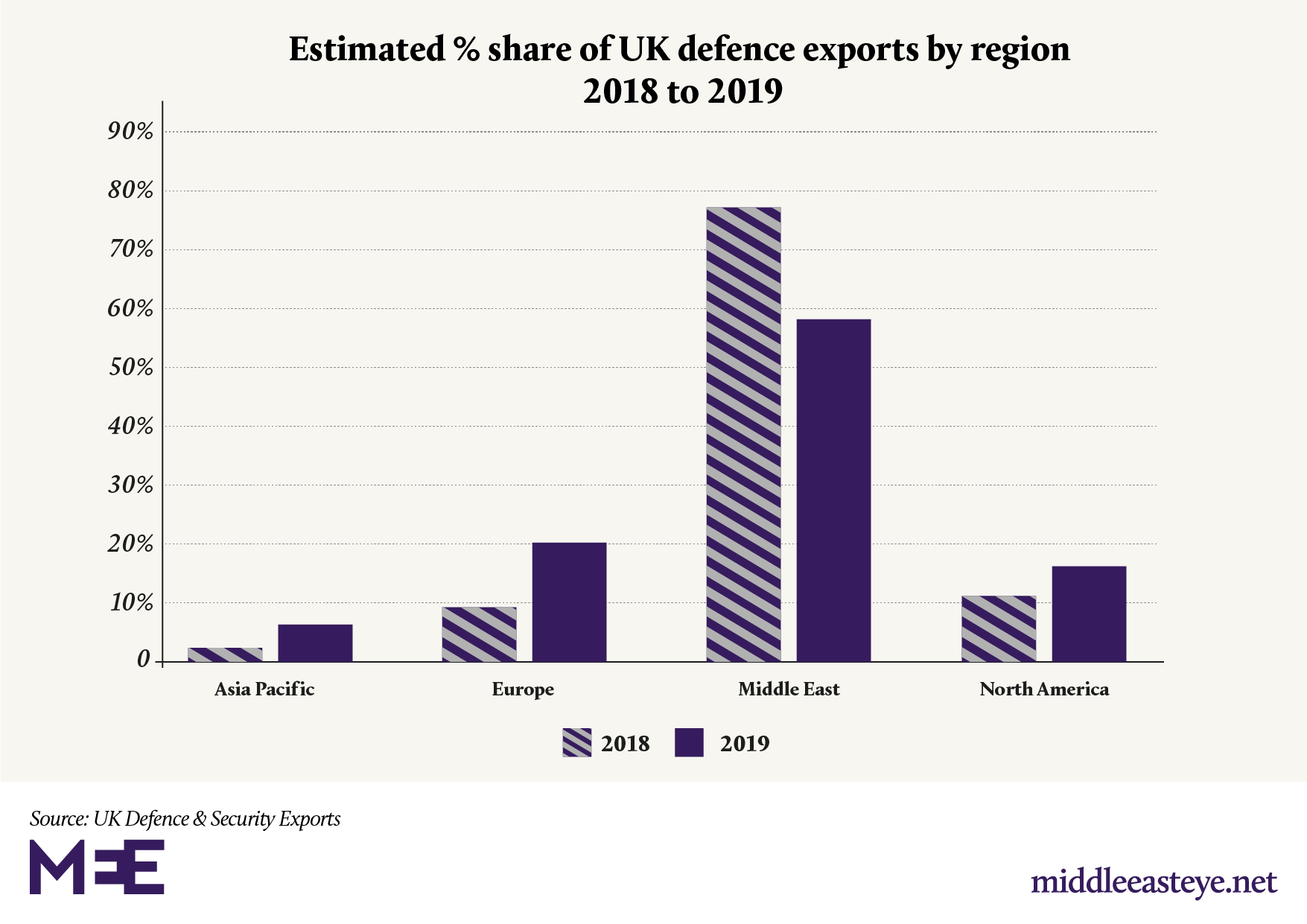 While the figures did not provide a breakdown by countries, it is highly likely that this decline was due to a halt in arms sales to a Saudi-led military coalition fighting in the civil war in Yemen.

In June last year, the British government announced that it was banning all new arms sales to Saudi Arabia, the UAE, Egypt, Bahrain and Kuwait, after a lengthy legal battle. The Court of Appeal ruled that the government had failed to make an assessment of whether there was a risk that the weapons could be used to breach international humanitarian law.

The UK has since resumed arms sales to the Saudi-led coalition, after International Trade Secretary Liz Truss said that any breaches of international law were “isolated incidents”.

While the Middle East dominates arms imports, the only country from the region to feature in the top 10 exporters over the past decade is Israel.

The US leads the way on sales, having exported $341bn worth of arms to the rest of the world. The UK is second with $125bn, followed by Russia’s $98bn.

Israel is joint seventh, exporting $16bn - the same figure as Canada and Spain. 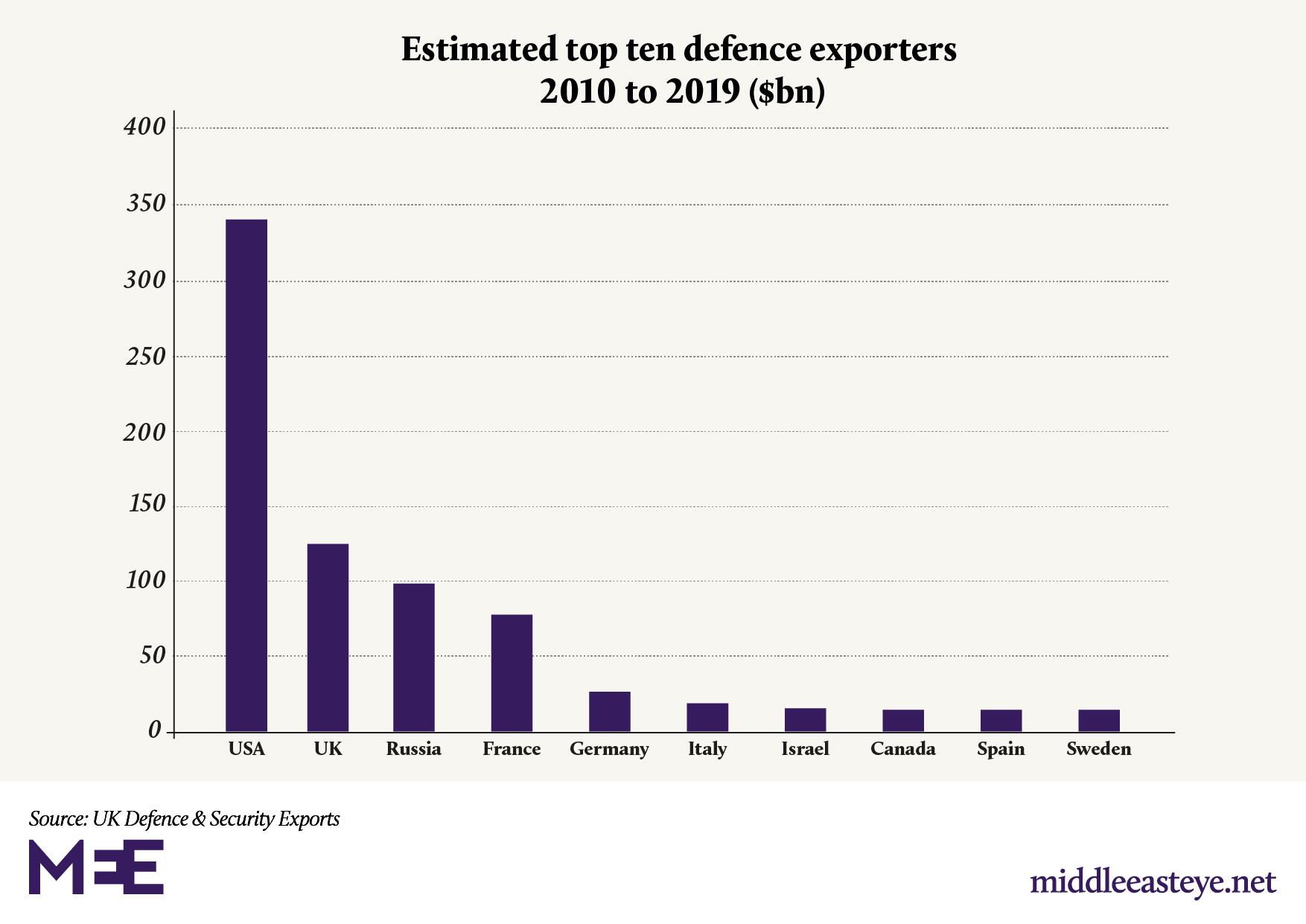 According to Israel’s own estimates, its exports are much higher than the UK’s figures released this week suggest. A report released by the Israeli defence ministry in June said the country had sold $7.2bn in 2019 alone, and a similar figure last year.

Many observers have suggested that the recent normalisation deal between Israel and the UAE will likely be accompanied by an increase in arms deals between the two countries.

The UK’s security exports, which include security for major events, central governments, borders and transport, mostly went to Europe.

Europe spent £2.59bn on British security, making up 36 percent of the market share.

The Middle East region made up only 7 percent - a much lower share than the region’s spending on defence. UK cyber-security exports to the Middle East were just slightly higher, with an 8 percent market share for the region.

No countries in the Middle East were among the world’s top 10 security exporters, with the USA, China and the UK leading the way.

Israel - which did not feature in the top 10 - is thought to be a large exporter in surveillance solutions. In particular, Israeli cyber-security firm NSO Group has been frequently condemned by human rights groups for selling spyware to governments accused of using it to surveil journalists, activists and citizens.

As with arms sales, many have predicted that the recent Israel-UAE deal will result in a strengthening of cyber-security ties between the two countries. 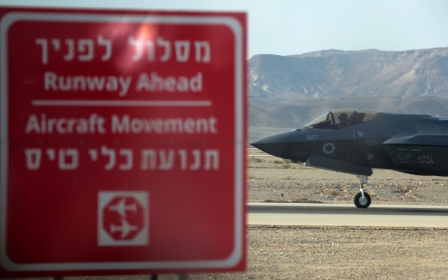 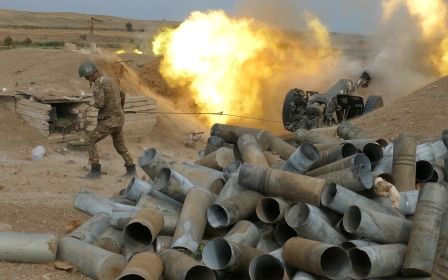 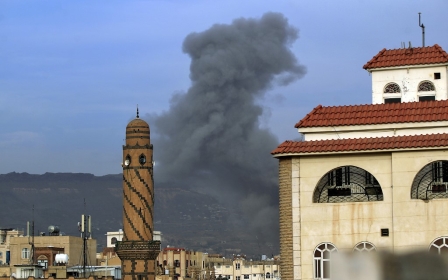