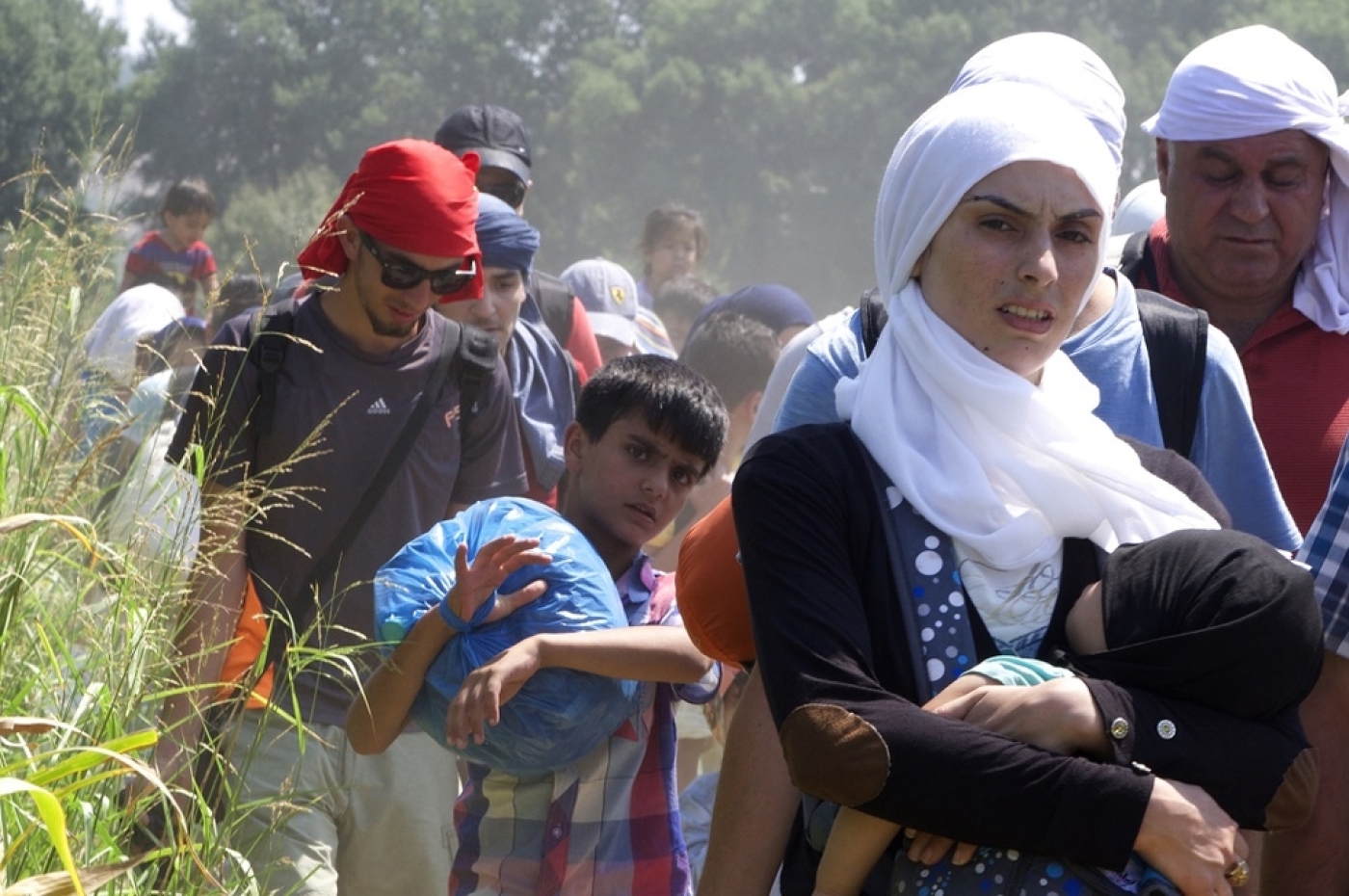 A group of refugees, mostly Syrian people, walk through the fields in northern Greece as they travel towards the Macedonian border (AFP)
By
MEE and agencies

He did not confirm a figure, although the UN has said that the UK has agreed to take in 4,000 Syrians.

“We obviously welcome very much the move to increase resettlement spaces for Syrians in the UK. Those spaces are going to be critical to the lives and future of 4,000 people,” spokeswoman Melissa Fleming told AP.

In his speech, Cameron said that the refugees would be taken from UN camps bordering Syria, in places like Turkey and Lebanon. Refugees who have already crossed into Europe will not be considered, he added.

"We will continue with our approach of taking them from the refugee camps. This provides them with a more direct and safe route to the UK, rather than risking the hazardous journey which has tragically cost so many lives," Cameron said during a trip to Portugal.

He did not mention the crisis in Calais where refugees and migrants have been trying to illegally board trains and buses headed to the UK, stalling trains and shutting the Channel Tunnel in recent weeks.

On Thursday Cameron said that he had been "deeply moved" by images of three-year-old Syrian toddler Aylan Kurdi, who was found dead on a Turkish beach, and said Britain would meet its "moral responsibilities". The images have sparked widespread outrage, despite the migrant and refugee crisis intensifying for much of this year.

Further details about the plan are set to be outlined next week. Scottish Nationalist Party leader Nicola Sturgeon hit back at the announcement saying that she wanted more details of the plan, adding that so far the difference between Germany's and Britain's response “couldn’t be more stark”.

She added that Scotland should accept 1,000 refugees as a “first step” and that this should not be a cap or limit.

The UK has taken in 5,000 Syrian refugees so far, and provided £900mn ($1.3bn) worth of aid over the last four years, although until now Cameron had proven resistant to taking in more refugees. On Wednesday he said that "taking more and more refugees" was not the answer to the EU's current migration crisis.

"We are taking action across the board... the most important thing is to try to bring peace and stability to that part of the world," Cameron said. "I don't think there is an answer that can be achieved simply by taking more and more refugees." However, it seems that the latest wave of public pressure has forced him to relax his position.

"The prime minister isn't changing his argument," BBC's deputy political editor James Landale wrote. "He still thinks opening up Europe's borders and agreeing quotas will not solve the refugee crisis. In fact, he thinks it would make it worse by increasing pull factors and encouraging people traffickers. But, as the crisis gets worse and the public and political pressure grows, the prime minister does now accept that Britain has a moral duty to do more."

The social media response, much like the British public, has so far been split.

David Cameron: Britain must accept its fair share of refugees seeking safety in Europe - Sign the Pet... https://t.co/PkxznFkRxy via @Change

So David Cameron is spending yet more money but this time to transport the migrants to the uk , not impressed...

A YouGov poll on Thursday found that one in 10 Brits would be willing to house a refugee in their homes, although 75 percent said they would not and 14 percent were undecided.

The announcement comes as fresh tragedy hit the Mediterranean, with at least 30 migrants feared drowned off the Libyan coast, the International Organisation for Migrants said.

So far this year, more than 2,500 people have drowned in the Mediterranean with the numbers expected to keep growing over the coming months.

In the first six months of this year, more than 220,000 people were detected crossing the Mediterranean to Europe.

UN High Commissioner for Refugees António Guterres called on Friday for the EU to admit up to 200,000 refugees as part of a "mass relocation programme" that would be binding on EU states.

"People who are found to have a valid protection claim... must then benefit from a mass relocation programme, with the mandatory participation of all EU member states," Guterres said in a statement on Friday.

EU foreign ministers are scheduled to meet later on Friday to discuss the refugee crisis.

"Europe cannot go on responding to this crisis with a piecemeal or incremental approach," Guterres said. "No country can do it alone, and no country can refuse to do its part."