Muhammad Rabbani says he has been subjected to Schedule 7 questioning more than 20 times (MEE/Osha Al-Mossallami)
By
Simon Hooper
, Osha Mahmoud

The director of a British human rights group says he is facing a possible prison sentence for refusing to disclose passwords for his phone and laptop when he was stopped and questioned by police at Heathrow Airport last year.

Muhammad Rabbani, the international director of Cage, was arrested by counter-terrorism officers on 20 November following a "Schedule 7" examination which took place on his return to the UK from a trip abroad.

Rabbani told Middle East Eye he had declined to share his passwords because of client confidentiality relating to the case of a torture survivor which he had been investigating.

He said he felt he had been subjected to a “digital strip search” despite being told by police that he had “nothing to worry about” and was not suspected of any wrongdoing.

Schedule 7 (see below) of the Terrorism Act allows police and immigration officials to detain and question any person passing through border controls at ports and airports for the purposes of determining whether they are involved in terrorism.

'Passwords have become very personal intimate things. Although they are only a few letters they are actually like the key to the front door of your house'

No suspicion of involvement in criminal activity or warrant is required, and failing to answer questions or cooperate is a criminal offence.

“Passwords have become very personal intimate things. Although they are only a few letters they are actually like the key to the front door of your house,” said Rabbani.

“With a password you can enter into a person's life. Everything is digitised these days, sometimes going back years and years. So when that is violated and you are forced to surrender a password without reason or suspicion, that really feels like a digital strip search.” Rabbani said he was questioned for three-and-a-half hours at Heathrow airport before being arrested and handcuffed and taken to a police station. He was released on bail nine hours later but his phone, laptop and a USB stick were confiscated and remain in police possession.

He will learn this week whether prosecutors plan to press charges carrying a possible three-month prison term.

Rabbani said he had been stopped for questioning under Schedule 7 powers more than 20 times but had never previously been arrested. On other occasions police had “acted with discretion,” he said, when he had failed to divulge passwords and not pursued the matter.

“I have never been arrested before. I don't have any criminal convictions so that was something quite difficult to be put in handcuffs, to be taken by police officers through the airport. I asked them, 'Do I need to be in handcuffs?' They were not suggesting that I had done anything violent. All of that is disturbing because I don't think I've done anything wrong.”

Under Schedule 7 powers, police can access and download travellers' electronic devices and collect biometric data such as DNA samples and fingerprints.

According to 2016 statistics, only 0.02 percent of stops lead to an arrest. An even smaller number lead to criminal charges

A leaflet handed over to people subjected to Schedule 7 questioning says that police officers have the right to request passwords and log-in details and warns that failing to comply with any requests “could result in a prison sentence, a fine, or both”.

Civil liberties and human rights groups including Cage have long raised concerns that Schedule 7 powers are being used as a means of intelligence gathering and are discriminatory against ethnic minorities.

According to 2016 statistics, only 0.02 percent of stops lead to an arrest. An even smaller number lead to criminal charges.

Gareth Peirce, a human rights lawyer at Birnberg Peirce and Partners, said: “Schedule 7 is an enormous blunderbuss that is over-used and the consequence of its overuse is that it is abusive. It affects almost every Muslim who contemplates travelling. It is not just the increasing numbers of Muslims stopped but that the same people are stopped repeatedly. Once on the system, you are flagged up for life.”

Rabbani told Middle East Eye that the devices seized contained sensitive information relating to an investigation that Cage is undertaking into allegations of the involvement of a western government in the torture of a detainee.

“The result has been interference into an ongoing investigation. My devices are gone. Some of the information that I needed and wanted to use has gone," he said.

"I don't think it's sensible or anyone would agree with government interference in the work of an independent NGO seeking redress for a torture victim.”

Police use of Schedule 7 powers was previously subjected to scrutiny in 2013 when David Miranda, the Brazilian partner of investigative journalist Glenn Greenwald, was stopped at Heathrow while carrying electronic files relating to documents leaked by the US whistleblower Edward Snowden.

A court of appeal judgment in that case ruled that the use of Schedule 7 powers in respect of journalistic information or material was incompatible with rights of freedom of expression.

“The Miranda case ruled that there needs to be some sense of proportion and police need to behave sensibly,” said Rabbani.

“If you a doctor, if you a lawyer, if you are a journalist, in any profession where you are dealing with members of the public you have a duty of care to protect clients' confidential information. The implications of this power are far wider. They do come up against important values for an open society."

London-based Cage, whose directors also include former Guantanamo Bay detainee Moazzam Begg, describes itself as an “independent advocacy organisation working to empower communities impacted by the War on Terror”.

The organisation has been the target of past attacks by the British government and its supporters, notably after revealing in 2015 that a British citizen, Mohammed Emwazi, who had appeared in Islamic State (IS) group execution videos, had approached it years before to complain that he was being harassed by the British security services.

Then-prime minister David Cameron singled Cage out for criticism in a speech in the same year in which he pledged to tackle the “poison” of Islamist extremism.

The United Kingdom is considered to have some of the most invasive surveillance powers among western nations.

Data-collecting powers granted to intelligence agencies by last year's Investigatory Powers Act (RIPA) were described by Jim Killock, the executive director of the Open Rights Group, as “a surveillance law that is more suited to a dictatorship than a democracy”.

But Killock told MEE that powers to demand passwords under RIPA at least required suspicion and an investigation, whereas Schedule 7 allowed for “entirely speculative demands” for the same information to be made.

"Handing over a password means giving access to a whole device and with it our entire digital lives. People should only be compelled to hand over their password if a warrant has been issued because there is a specific reason to suspect them of wrongdoing,” said Killock.

The Metropolitan Police confirmed that a 35-year-old man had been stopped and subsequently arrested under Schedule 7 powers on 20 November 2016. It said it would not be appropriate to discuss details of an ongoing investigation. 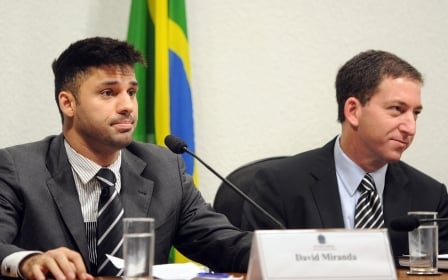