Claiming to channel the assassinated Egyptian president, psychic tells TV audience that Abdel Fattah al-Sisi should fear for his life Reality TV broke new ground on Egyptian television when a psychic was invited into the studio to predict the future.

Presenter Ranya Mahmoud Yasmin, whose father is a movie star, took the brave decision last week to test on air the claims of the psychic, Ahmad Shahin, that he can communicate with the spirits of the dead. Her show appeared on a channel loyal to President Abdel Fattah al-Sisi.

In the interests of editorial balance, she also had installed on the sofa a religious scholar and sheikh from the official Al Azhar, the country's most prestigious Islamic university, to rubbish the psychic’s claims. The sheikh argued that these were bogus because once people were dead, no one could communicate with them. Shahin was not to be so easily deterred.

In what must have been adverse conditions - the studio lights, the continuous barracking of the Sheikh and the giggles of Yasmin who struggled to keep a straight face - the calm and collected psychic proceeded to communicate with the world beyond.

Shahin stood up and dangled a pendant over a bowl of smoking incense. "Maltoush. Maltoush. The wheel. The wheel," he intoned." Here he comes. He is present."

Challenged by the sheikh to summon his dead uncle Ibrahim, Shahin announced he had a more important voice online. The uninvited studio guest turned out to be the late president Anwar Sadat. Shahin wrote Sadat’s alleged words down on a piece of paper.

Shahin continued reading from the scribbled text: “I was killed in the midst of my children in the army.

"May its shield protect Egypt. Beware of what is coming and take care of your southern borders because they will be taken away from you.

"Beware of the treachery of the Muslim Brotherhood. Because they will reinstate their president and there will be another coup. And then nothing else will happen at all.

"But beware of what is coming next. Wait for Hasan, because he is coming soon. Hasan who is known for his good looks is coming to you soon. He is the one you are waiting for.”

By now beside himself, the sheikh accused the psychic of endangering national security by suggesting that Sisi was going to be assassinated.

The 11-minute clip which is now on YouTube had an unhappy ending for Yasmin, whose employers could not get the joke. She denied in a tweet that she had been sacked by Said Hasasin, president of the Al-Asimah (The Capital) channel.

She maintained that she resigned, and was moving to Al-Hadath TV Channel where her future, to say nothing of Egypt’s, beckons. 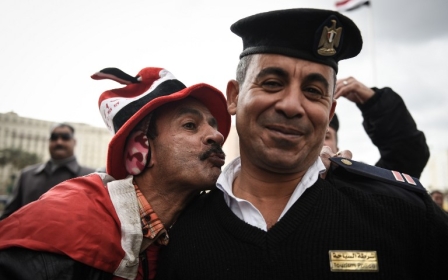