This combo photo shows the two suspects in the 2 December 2015 mass shooting in San Bernardino, California, (AFP)
By
MEE and agencies

Despite the Islamic State (IS) group's claim to have inspired the 2 December San Bernardino massacre, the investigation thus far has not confirmed whether any IS leaders actually had any role in the deadly shootings in California that killed 14 people.

Much remains unclear about the motivation of the young Muslim couple who allegedly attacked the husband's co-workers at a workplace holiday party in San Bernardino, California on Wednesday.

The FBI said one of the attackers, Tashfeen Malik, 29, pledged allegiance to IS in a Facebook posting, while her husband, Syed Rizwan Farook, 28, had been in touch with the al-Nusra Front and one other unnamed armed group in Syria.

An official IS broadcast declared "we pray to God to accept them as martyrs" but it did not explicitly state whether the group had any involvement in the attack.

FBI Director James Comey told reporters the shooters had showed signs of “radicalisation” but no evidence thus far of being officially apart of an armed group.

The FBI, currently investigating the attack as an act of terrorism after finding evidence that the wife may have made an online pledge of allegiance to IS, has not yet provided details as to when and why the couple chose to get radicalised.

The attack came as a surprise to experts because their nondescript target did not symbolise a specific cause and the couple are not thought to have been on any watch list.

An attorney representing Farook and Malik's family told reporters that Malik never mentioned IS or terrorism.

“As far as I know, there was no discussion of any of that [among family members]," Mohammad Abuershaid said.

However, the attack bore the hallmarks of the mass shootings that have become so common in the US.

The shooters bought the firearms and ammunition used in the attack legally at a gunstore based in Fort Worth, Texas.

A Los Angeles Times report found that the gunstore, Cheaper Than Dirt, is a “shooting sports discounter” where customers can purchase guns, ammunition and tactical gear online or by telephone. Customers can also buy kevlar vests, high-capacity ammunition magazines and a large variety of semi-automatic rifles.

“Bringing a firearm into your home is one of the most important decisions you can make,” an automated response began after a call to the dealership, according to the Los Angeles Times. “Federal law requires all firearms are to be shipped to federally licensed firearm dealers only,” according to the message.

Cheaper Than Dirt's website also claims that “purchasing a gun online is really, very easy,” and it helps directs customers to a portion of the site dedicated to helping Californians buy guns.

According to a 2007 report by the Small Arms Survey, a Swiss group that tracks arms profileration around the world, the US far more guns per capita circulating among the population than any other country. Around 270 million guns are in circulation in the US, averaging nearly a gun per person.

US laws and regulations regarding gun ownership are lenient compared with countries in Western Europe. US citizens can legally purchase high-powered firearms and as much ammunition as they want without it being flagged by the authorities.

Farook and Malik bought 2,000 nine-millimetre handgun rounds, 2,500 .223-caliber rifle bullets and "hundreds of tools" with the potential of being used to build explosive devices, authorities said.

Despite its leading role in overseas military actions against Islamist networks such as al-Qaeda and the Islamic State group, the US does not face a domestic militant threat on the scale of its European allies.

"However, in Europe, so-called 'lone wolf' attackers cannot easily get their hands on high-powered firearms," Alexander Meleagrou-Hitchens, head of research at the International Centre for the Study of Radicalization and Political Violence, told AFP.

"The problem for the United States is that these type of jihadists can arm themselves legally and then become almost as deadly as highly trained jihadists with formal connections to groups abroad. For me, it has always been a matter of time before a group of homegrown jihadists in America got their hands on firearms and carried out an attack like this, it is such an obvious and easy thing to do."

Following the California attacks, US President Barack Obama implictly said that those wanted for terrorism could legally purchase a firearm.

This year has seen record numbers of arrests of suspected extremists, many of them victims of FBI sting operations but others with ties to foreign groups deemed "terrorist organisations" under US law.

According to a major study of US militants released this week by George Washington University, 250 Americans have traveled or attempted to travel to Syria or Iraq to fight for the IS group's self procalimed "caliphate".

There are 900 active investigations against alleged IS sympathizers spread across all 50 US states and 71 have been charged with "IS-related" activities since March. Fifty-six of these suspects were arrested this year.

It was not until days after the attack that IS called the perpetrators "soldiers" of its caliphate in an English-language radio broadcast and "supporters" in Arabic.

Experts following the threat said the core group seemed as surprised as anyone by the attacks.

Rita Katz, director of private terror watchdog the SITE Intelligence Group, told AFP that during last month's IS attacks in Paris the group had flooded the Internet with celebratory propaganda, some of it apparently pre-prepared.

But this week, the usual militant online forums were silent until news emerged from the US investigation that the couple were Muslims who had met in Saudi Arabia and had apparently found their own way to radicalisation.

"They [the forums] didn't celebrate it. It was nothing compared to what we usually see. It took them two days to come out with anything," Katz told AFP. "Now if you go on Twitter, it's a totally different story. They're flooding Twitter now."

Katz said police photographs of pipe bombs the couple had prepared resembled the detailed diagrams provided for so-called "lone wolf" attackers in al-Qaeda's online English language magazine Inspire, and the suspects' decision to mount their own raid rather than joining an organised cell reflected instructions posted in the Islamic State's publication Dabiq - named after the Syrian village where the group expects to make its last stand against infidel forces at the world's end.

The second edition of Dabiq published in July last year told supporters who were unable to make a pilgrimage to fight for the caliphate; to pledge allegiance, or "bayat" in Arabic, to the IS leader; and to launch domestic attacks.

"Try to record these bayat and then distribute them through all forms of media including the Internet," it said.

In May this year, two gunmen attacked a conference in Garland, Texas, that was hosting cartoons of the Prophet Mohammed designed to be offensive to some Muslims. Police suspect the attackers were self-radicalised jihadists.

Wednesday's attackers were not the first young US couple tempted by the movement. Earlier this year, 22-year-old Mohammad Oda Dakhlalla and 19-year-old Jaelyn Delshaun Young were arrested as they prepared to head to Syria. 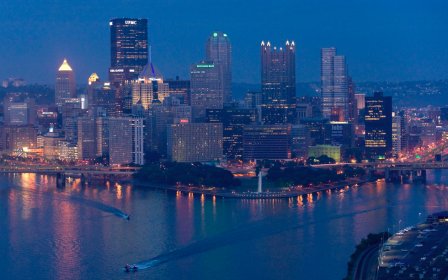