Germany, Indonesia, the UK, Iranians, Iraqis and Yemenis among those condemning Trump's ban on entry from seven Muslim countries British Foreign Secretary Boris Johnson is set to call his US counterpart as politicians and the public deman that a planned state visit by Donald Trump be cancelled over the US president's "Muslim ban."

By Monday morning there were more 1,000,000 signatures on a petition calling for the planned visit to the UK to be cancelled.

"Donald Trump's well documented misogyny and vulgarity disqualifies him from being received by Her Majesty the Queen or the Prince of Wales," read the petition

"Therefore during the term of his presidency Donald Trump should not be invited to the United Kingdom for an official State Visit."

The petition was launched on Sunday afternoon, and is gaining signatures at a rate of hundreds per minute.

Every petition that garners more than 100,000 signatures must be considered for a parliamentary debate - MPs will vote on Tuesday about whether to debate the bill.

The Conservative MP Nadhim Zahawi - who was born in Iraq and is directly affected by the ban - is calling for an emergency debate on the issue.

With @Ed_Miliband calling for an emergency debate on the divisive ban by the United States on Nationals from predominantly Muslim countries.

As the petition continued to gain steam, Johnson - as well as Home Secretary Amber Rudd - were set to contact the US administration to gain assurances that British citizens would not be hit by Trump's executive order, which suspends the arrival of refugees for at least 120 days and bars visas for travellers from seven Muslim majority countries for three months.

Labour party leader Jeremy Corbyn earlier on Sunday called for the visit to be cancelled, asking whether it was "right to endorse somebody who has used this awful misogynist language throughout the election campaign, awful attacks on Muslims and then this absurd idea of building a wall with their nearest neighbour?"

Ruth Davidson, the leader of the Conservative Party in Scotland, also added her voice to those calling for Trump's visit to the be cancelled.

"A state visit from the current president of the United States could not possibly occur in the best traditions of the enterprise while a cruel and divisive policy which discriminates against citizens of the host nation is in place," she said, according to the Guardian. After much pressure from domestic politicians including members of her own party, British Prime Minister Theresa May confirmed on Sunday that she did "not agree" with Trump's measures and would intervene if they impacted UK citizens.

"But we do not agree with this kind of approach and it is not one we will be taking. If there is any impact on UK nationals then clearly we will make representations to the US government about that."

Her statement came after outcry over May's refusal on Saturday to condemn the measures and the revelation that an Iraqi-born Conservative Party MP would be subject to the ban.

'Donald Trump destroyed my life. My family's life. I used to think America was a state of institutions but it's as though it's a dictatorship.'

Iraqi-born MP Nadhim Zahawi tweeted that he had had received "confirmation that the order does apply to myself and my wife as we were both born in Iraq," despite both possessing British passports.

"A sad sad day to feel like a second class citizen! Sad day for the USA."

The furore came as demonstrations continued to be held across the US and the wider world, with more planned in the coming days.

A US judge temporarily halted deportations of Muslims detained on entry from the countries affected on Saturday.

US District Judge Ann Donnelly issued her decision, ordering authorities to stop deporting refugees and other travellers stuck at US airports.

"Our courts today worked as they should as bulwarks against government abuse or unconstitutional policies and orders."

The ACLU said the reprieve would help 100 to 200 people with visas or refugee status who found themselves stopped in transit or at US airports.

Thousands demonstrated across the US over the weekend, particularly targeting airports, calling for refugees and Muslim migrants to be allowed into the country.

Huge numbers turned up at JFK airport in New York, a city with little support for Trump's presidency generally, chanting "let them in!" and holding placards condemning both the anti-Muslim order and the plan to build a wall along the border with Mexico:

Taxi drivers in the city also announced a suspension of their services for an hour in solidarity with immigrants who have been temporarily blocked from coming into the country.

World leaders lined-up over the weekend to condemn Trump's policy.

"She is convinced that even in the necessarily resolute battle against terrorism it is not justified to place people from a certain origin or belief under general suspicion," her spokesperson, Steffen Seibert, was quoted as saying by national news agency DPA.

The foreign ministry of Indonesia, which is not one of the countries affected by the ban, said it "deeply regretted" Trump's policy.

"Even though this policy is the United States' authority, Indonesia deeply regrets it because we believe it would affect the global fight against terrorism and the refugees' management negatively," ministry spokesman Arrmanatha Nasir told AFP.

"It is wrong to link radicalism and terrorism with one particular religion," Nasir said.

Indonesia's embassy in Washington has advised its nationals living in the United States to stay alert and learn about their rights from the American Civil Liberties Union. In Yemen, which is affected by the ban, the Houthi rebels currently targeted by a Saudi-led coalition condemned Trump's ban as "illegal and illegitimate".

The Houthi-controlled news agency SABA quoted a foreign ministry source as saying the ministry was aware that such action is the sovereign right of the US government.

But "the source said emphatically that any attempt to classify Yemen or its citizens as a possible source of terrorism and extremism was illegal and illegitimate".

Politicians from Iran and Iraq, two other countries affected by the ban, called for their countries to respond in kind to Trump's order.

Iraq's foreign affairs committee on Sunday said the US travel curbs imposed on Iraqis were "unfair," and asked the government in Baghdad to "reciprocate" the American decision.

The committee made its call after a meeting in Baghdad.

"We ask the Iraqi government to reciprocate to the decision taken by the US administration," said the committee in a statement read to Reuters by one its members, Hassan Shwerid.

"Iraq is in the frontline of the war of terrorism ... and it is unfair that the Iraqis are treated in this way."

On Sunday, Iran's foreign minister said Americans who already hold Iranian visas can enter the country, even though Tehran vowed to "respond in kind" to the US ban on Saturday.

"Unlike the US, our decision is not retroactive. All with valid Iranian visa will be gladly welcomed," Mohammad Javad Zarif said on Twitter.

With more than one million Iranians living in the United States, the restrictions have already caused chaos for students, businessmen and families.

US State Department figures show Iran accounted for around a quarter of the 31,804 visas granted to citizens from the seven countries last year.

Among thousands facing difficulties, an Iraqi family was barred in Cairo from taking their connecting flight to New York on Saturday.

"I had sold my house, my car, my furniture. I resigned from work and so did my wife. I took my children out of school," Fuad Sharef, 51, told AFP.

"Donald Trump destroyed my life. My family's life. I used to think America was a state of institutions but it's as though it's a dictatorship." 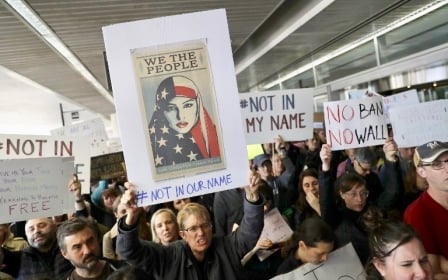