Canada to take in hundreds of refugees detained in Libya

Immigration minister says 150 refugees have been resettled in Canada, while 700 others will arrive in next two years Refugees and asylum seekers have been subjected to torture and other inhumane treatment in Libya (AFP/File photo)
By
Jillian Kestler-D'Amours
in
Montreal, Canada

Canada has announced plans to take in hundreds of refugees previously held in Libya, including some who were rescued from detention centres rife with abuse and inhumane conditions.

Ahmed Hussen, the Canadian minister of immigration, refugees and citizenship, said more than 150 refugees have been resettled in Canada so far, coming directly from Libya, while more than 600 others will be resettled over the next two years.

In addition, the Canadian government plans to resettle 100 refugees from Niger who were "rescued from Libyan migrant detention centres, including victims of human smuggling", Hussen said in a statement to Middle East Eye on Thursday.

"In 2017, the world was shocked to see the harrowing images of people being sold into slavery in Libya," Hussen said.

"In response to the situation, Canada was one of the few countries to step up to work with the [United Nations refugee agency] UNHCR to resettle these refugees directly from Libya and offer them a new home in Canada," he added.

The UN appealed for help in 2017 to resettle refugees and asylum seekers from Libya, thousands of whom have used the North African country as a jumping off point to try to reach Europe via the Mediterranean Sea.

Over the past few years, the UN has issued many reports of asylum seekers drowning or disappearing during the perilous Central Mediterranean crossing - the waters between Libya, Italy and Malta.

The UN estimates that one person died or went missing for every 18 people who crossed there between January and July last year, while there were at least 10 incidents in 2018 in which more than 50 people died at sea after leaving Libya.

"One of the key issues behind all of this are the ongoing deaths in the Mediterranean as people continue to risk their lives," Michael Casasola, UNHCR's senior resettlement officer in Canada, told Middle East Eye, about Ottawa's plans to resettle the refugees from Libya.

Last month, the UN reported that six people died every day last year on average while trying to cross the Mediterranean. A total of 2,275 people died or went missing in the Mediterranean in 2018, while 139,300 refugees and migrants arrived in Europe, which the UN said was "the lowest number in five years".

Casasola said Canada was among several countries to respond to UNHCR's appeal in September 2017 for countries to resettle refugees along the Central Mediterranean route.

At the time, only 6,700 refugees along routes to Libya had been resettled, UNHCR said, which prompted the agency to call for an additional 40,000 resettlement slots to be made available to accommodate refugees in 15 countries along the migration route.

Conditions in Libya also made the UN's 2017 appeal for refugee resettlement that much more urgent.

Indeed, as the Libyan authorities, in collaboration with some European Union states, clamped down on Mediterranean crossings, many of the asylum seekers who sought to get to Europe have ended up in detention facilities in Libya.

Media reports and human rights groups have detailed widespread abuse against the refugees and asylum seekers still in Libya, including torture and rape, as well as several cases in which asylum seekers were sold into slavery.

Casasola told MEE it's a challenge to get access to Libyan detention centres and UNHCR has been trying to take as many refugees out of the country as it can.

Since December 2017, the agency has evacuated more than 3,000 refugee claimants to nearby Niger, which is where some of the refugees to be resettled in Canada will be coming from.

"We've evacuated people from Libya to Niger and now we're trying to move them out to try to keep the government of Niger happy," he said.

Each refugee claimant must be processed and undergo a security check before they can be resettled abroad, Casasola explained, which means the entire process can take some time. "There's a lot of logistics that goes into it," he said.

Still, he said an effort has been made to try to find solutions earlier, "instead of people risking their lives on the Mediterranean".

Indeed, the number of people drowning in the Central Mediterranean skyrocketed midway through 2018, with 721 deaths at sea recorded in June and July last year, according to Amnesty International.

The rights group has accused European governments of adopting policies to close the Central Mediterranean route, thereby pushing asylum seekers into the hands of smugglers, or back into dangerous conditions in Libya.

For instance, Italy has pursued policies that "have left people stranded at sea for days", Amnesty said, while European Union countries "are conspiring to contain refugees and migrants in Libya, where they are exposed to torture and abuse".

Meanwhile, Amnesty says “torture, detention, exploitation and rape are daily horrors” for many refugees and migrants in Libya.

"Thousands of migrants, refugees and asylum seekers are being held in detention centres with no sense of when or if they will ever be released. The conditions are utterly inhumane - with little access to food, water or medical care. They face brutal treatment; torture, rape – and even being sold," the group said.

Despite Canada's commitment, Casasola said there remains a serious need for countries to open up many more resettlement spots for refugees.

He said about 1.4 million refugees are in need of resettlement, but only 70-80,000 resettlement spots are available around the world - about 5 percent of what's needed.

"With that, you then are having to make these difficult decisions: 'If we focus on Syrian refugees, how are we going to focus on Somali refugees,'" he said, by way of example.

"The international community gave UNHCR the role to protect and find solutions for refugees and resettlement is increasingly important in its ability to be a protection tool, in the sense of taking refugees out of dangerous detention centres and we're trying to find solutions in other countries.

"But the problem is they're not the only refugees who are in danger or are vulnerable. It's part of a larger problem." 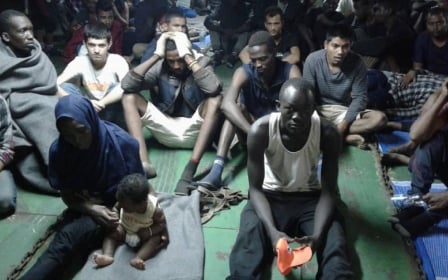