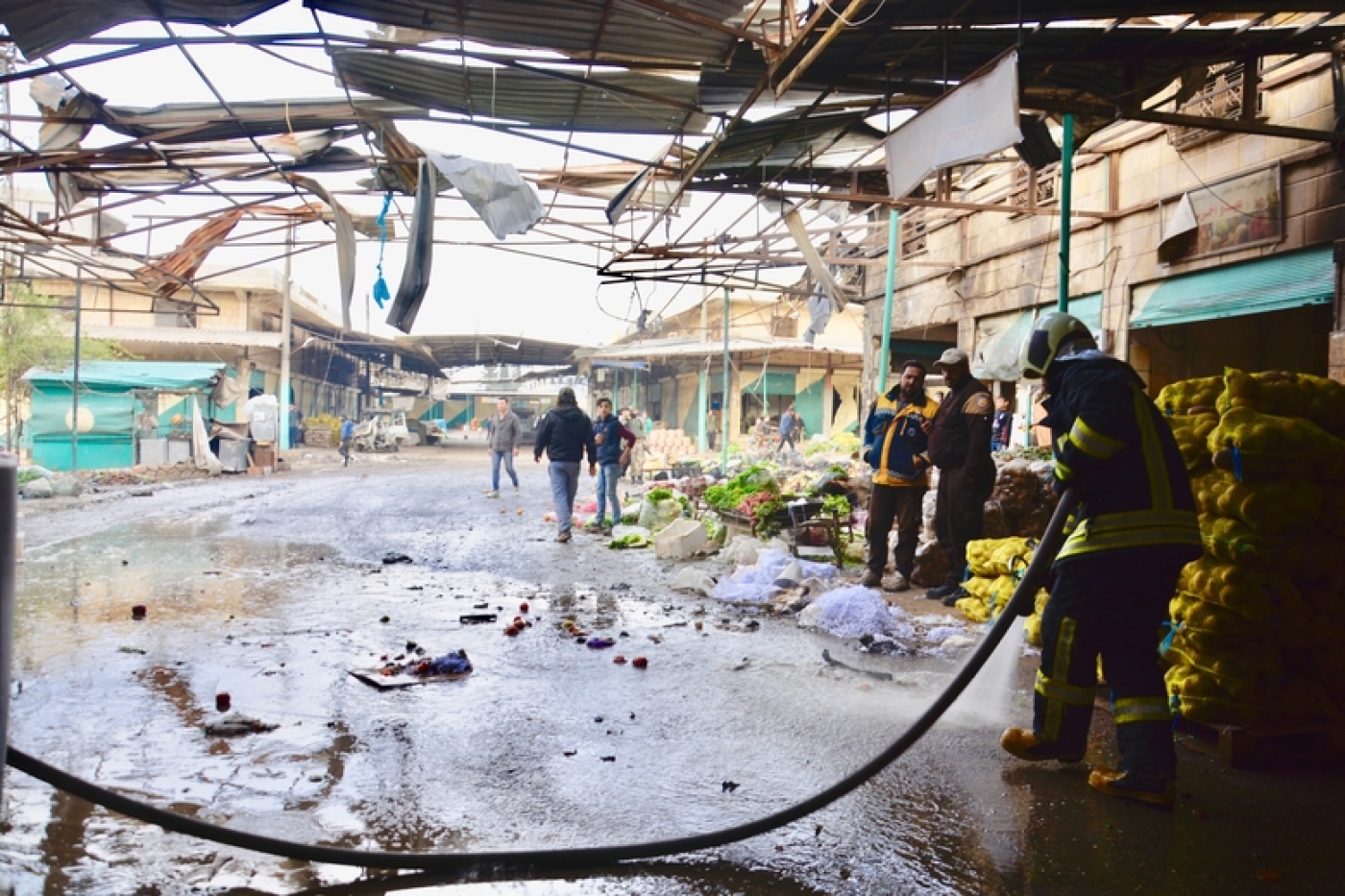 AFRIN, Syria - A car bomb killed at least nine people, including five civilians, near a pro-Turkey rebel post in the northern Syrian city of Afrin on Sunday, a British-based war monitor said.

The Syrian Observatory for Human Rights said the explosion inside the vegetable market killed at least nine people, and that number may increase as dozens were wounded.

“The car bomb exploded near a position of pro-Turkey fighters” in a market, killing five civilians and four fighters, Observatory chief Rami Abdel Rahman said, adding that it was not immediately clear who was responsible for the blast.

The blast comes after the Turkish president last week threatened to launch a new offensive against the Kurdish People’s Protection Units (YPG) in Syria.

Civil defence teams known as the "White Helmets" rushed to the scene to rescue the wounded among the wreckage.

Karam Saad al-Haj, a civil defence volunteer, told Middle East Eye that his team arrived on the scene soon after the explosion, recovered four bodies and rushed 18 wounded, some critically, to hospitals in the surrounding area.

After the explosion, local authorities fanned out through the city, and according to civil defence personnel they dismantled a car bomb near a medical office and found an explosive device near the Ashrafieh neighbourhood, which is close to the market.

Afrin was captured from the YPG in March by pro-Turkey Syrian rebels and Turkish armed forces, leading to the displacement of more than 150,000 people and widespread looting, according to the observatory.

Turkey accuses the YPG of being “terrorists”, but the Kurdish militia also forms the backbone of a US-backed alliance fighting the Islamic State (IS) group in Syria, AFP says.

Last week, Turkish President Recep Tayyip  Erdogan said his country planned to launch a new offensive within days against the YPG in northern Syria. YPG forces are present in areas along the Turkish border to the east of Afrin.

On Friday, US President Donald Trump agreed with Erdogan on “more effective coordination” between both countries in the war-torn region, as American forces are also present in the area east of Afrin as part of the US-led coalition fighting IS.

Several explosions have struck the region in the past month, and on Friday night, the Turkish defence ministry reported a Turkish soldier was killed in the Afrin region after coming under fire from the YPG.

Saad al-Haj of the White Helmets told MEE that he was worried there might be another explosion, and perhaps he or one of his colleagues could fall victim to it because most such blasts also kill civilians.

Shopkeepers and workers at the vegetable market were trying to collect their scattered livelihoods, including Yusuf Ajbou, 14, who told MME: “I work here in this shop, which was destroyed. Fortunately, I was with friends unloading vegetables in another shop. I came back here after the blast to help clean up and found that many of my neighbours were killed or wounded.”

Syria’s war has killed more than 400,000 people and displaced millions since starting in 2011 with the brutal repression of anti-government protests.