Celebrations and unease in Yemeni city liberated from al-Qaeda

Relief in Mukalla as militants flee from government forces without a fight, but some residents say they will miss the security of al-Qaeda's 'iron fist' MUKALLA, Yemen - Near the rubble of his office in the eastern suburbs of Mukalla, the army commander who led an offensive to oust al-Qaeda from the southern province of Hadramout proudly stood up and announced that the militants had been pushed out once and for all.

“At this historic moment, I am pleased to declare that the city of Mukalla has become free from all elements that undermined people’s security for a year. They have gone for good,” Major General Faraj al-Bohsini said on Monday.

Al-Qaeda in the Arabian Peninsula (AQAP) had been in control of Mukalla since 2 April last year, with the militant group racking up millions of dollars from oil smuggling and tariffs imposed on ships anchoring in the city’s port.

But it took just a few days this week for thousands of pro-government forces - heavily armed with modern weapons provided by the UAE and supported by heavy Saudi-led coalition bombing - to move in and recapture the city.

In a desperate attempt to avoid being spotted by warplanes, al-Qaeda shunned armed vehicles and instead deployed its fighters on motorbikes. Clashes raged for hours on the outskirts of Mukalla as the militants were slowly pushed out from one neighbouring village to another.

As the forces drew near, snipers could be seen stationed atop the city’s hotels while other masked men hid in buildings, but ultimately few chose to stay and fight to the death.

In the centre of the city, people waited breathlessly for the fighting to start. Then, out of the blue, long convoys of pickups carrying al-Qaeda militants were spotted heading quickly westward towards remote villages in Hadramout and neighbouring Shabwa province, via the one corridor that had been left open by the coalition.

Large numbers of civilian residents, fearing a deadly showdown in the city, also used the same route to flee, although others chose to stay put.

By Monday morning, hundreds of people were out on the streets celebrating.

“This is a historic day. For the first time we had a pure Hadrami army,” a middle-aged man told Middle East Eye as he stood waving at the arriving forces, referring to the people of Hadramout province.

Bohsini and his forces tried to enforce a night-time curfew and a ban on motorbikes for security reasons, but the local population largely ignored them, choosing to celebrate the sudden demise of al-Qaeda late into the night.

Southern separatists, who have a strong presence in the city, could be seen out in force, shouting for joy that their cause would no longer be violently suppressed.

Al-Qaeda had considered calls for an independent South Yemen to be in violation of its belief in the unity of all Muslim lands, and had banned the flying of the former South Yemeni flag.

Shop owners also overwhelmingly defied fears of reprisal attacks, opening their shops late into the night and keeping them open to feed the flurry of new interest that has seen queues build up outside petrol stations. Even on Wednesday night, the city streets were full of people.

But while spirits have generally been high since al-Qaeda was ousted, an air of apprehension is apparent and many residents cannot help but wonder if the militants will be back.

Many also fear they will launch a campaign of suicide bombings and ambushes as they have done in the southern capital of Aden, 500 kilometres west of Mukalla.

During his news conference, Bohsini repeated the government line that al-Qaeda and other militant groups were tools of the former President Ali Abdullah Saleh, whose supporters have been fighting alongside Houthi rebels since last year.

With Saleh’s assistance, the Houthis took over the capital Sanaa in September 2014 and ousted President Abd Rabbuh Mansour Hadi early last year, forcing him to flee south and then into exile in Saudi Arabia.

Riyadh subsequently formed an anti-Houthi coalition that began bombing Yemen last March. While the Houthis have been pushed back from Aden, they remain in control of the capital, with many analysts arguing that AQAP and the rival Islamic State (IS) group have manipulated the power vacuum to their advantage.

Despite their rise, Bohsini told people that they had to be optimistic about the new changes in the city and stressed that his forces, backed by the wealthy Gulf states, were determined to protect Mukalla from militants.

He said that a convoy of aid ships from the Gulf states was on its way to the city.

“In one day we got rid of this disease forever, so Hadramout can live in peace. You must trust that your brothers in the Gulf who supported us militarily have a great desire to help us economically [as well],” Bohsini said.

Bohsini also sternly ordered public servants to return to their offices the next day or face punishment.

“I will go with soldiers and snatch those who turn up late in their offices,” he said.

'As fearful as al-Qaeda'

But some residents said that safety remained their overwhelming concern, and that the city needed security more than Gulf money, if life was to return to normal.

“If you asked people in this street what they want from the government, they would all say security,” said Munir, a salesperson at a shop in central Mukalla.

Munir told MEE he had grown accustomed to the public order strictly enforced by al-Qaeda and expected the government to continue to do the same.

“They should build a dignified security body like al-Qaeda and strike with an iron fist at those who breach the law. For a year, we have not seen civil disobedience or protesters who would block traffic and burn tyres,” he said, referring to past clashes between separatist protesters and government forces.

Al-Qaeda was widely criticised for stoning and whipping people, banning late-night wedding concerts and jailing shopkeepers who did not close their stores during prayer times.

But Riad, a barber in the old city of Mukalla, told MEE that al-Qaeda had also given them security and protected them from criminals.

“We want the government to be as feared as al-Qaeda,” he said.

“Before al-Qaeda, a thug could enter a shop and ask for a day’s earnings. Yemenis do not expect the government to provide them with jobs, they depend on themselves for a living. They only want peace.”

Riad said he did not expect al-Qaeda to return to the city, but was worried about possible car bombings.

“Car bombs, suicide attacks and sudden explosions are worse than clashes,” he said.

Since its relatively bloodless withdrawal, speculation and rumour has been rife about why al-Qaeda left without a fight.

Some suggest the group pulled out after mediation by religious leaders, while others say the militants realised they were outnumbered and retreated to avoid being wiped out.

But a local journalist with contacts to al-Qaeda operatives in the city told MEE that the militants had pulled out to spare their relatives.

“Most of al-Qaeda’s leaders are originally from Hadramout [province]. So they opted not to destroy their hometown,” he said on condition of anonymity because of security concerns.

As long as the fighters remain in Yemen and continue to have links to the city, many residents fear they will never feel totally safe, citing al-Qaeda’s track record of guerilla attacks.

“We live in perpetual anxiety about bombings,” the barber said. 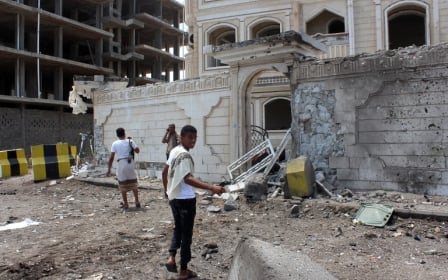